let's consider a printed dipole on a substrate with a GND plane:

I've seen many times an equivalent model which uses transmission lines like this (reference): 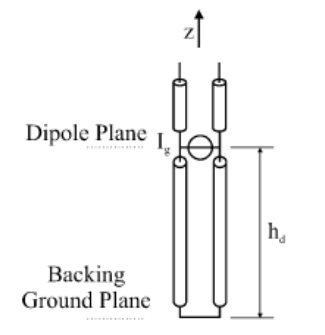 This model is useful to understand the effect of the presence of the GND plane (or other objects) on the antenna input impedance. In this model there are:

I have two question:

I) Is the line in vacuum left open, or is it unterminated (that means matched impedance?)

But, I cannot see the dipole impedance in this model. It's known that a dipole may show an inductive or capacitive impedance according to the ratio between its length and the wavelength. In this case it seems totally ignored. How should we take it into account? With a parallel impedance to the current source?

1
There is no reverse flow of energy in a mismatched transmission line, is this correct?
0
Transmission Line Model of Co-ax Lines
3
What is the main source of error for SWR meters?
5
Modelling a folded dipole
2
Double Cross antenna: what's wrong with my model?
4
Is an antenna always matched to free space impedance?
4
Frequency selective surfaces working principle
2
Apparent Paradox about wave reflection in a transmission line?
2
Does SWR change along the length of a transmission line?
3
When is it relevant to consider a trace as a RF transmission line