I have a homebrew motorized hf tuner which is controlled by coupling dc from the shack through two BiasTs - one topside, the other in the shack.

Parallel LEDs across the power source will only indicate the presence of voltage and its polarity.

Parallel LEDs in the line can indicate current flow and its direction. However, the LEDs cannot carry the motor current.

The LED in the following circuit will be lit as long as the motor is running in either direction. 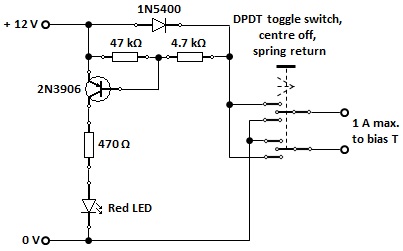 Not the answer you're looking for? Browse other questions tagged hf equipment-design antenna-tuner or ask your own question.