The way I understand how SDR works, there is a receiver input, generally connected to an antenna pulling in signals from the ether. That input is connected to two mixers (linear multipliers), being mixed with the same LO frequency in both mixers, however, the two LO signals are 90º out of phase. This results in two output signals, commonly referred to as I and Q, I for the "in phase" signal, and Q for the "quadrature", or 90º out of phase signal.

Then, if there is a modulated (say AM modulated with voice) frequency of interest, we can tune the LO to the carrier frequency, and because of heterodyning principles we are now only having to deal with the baseband frequencies, which is much easier/cheaper to digitize.

How do we deal with negative frequencies? FWIU, this is where the quadrature (Q) heterodyning comes in. Somehow by shifting the LO frequency 90º, the output from the Q mixer contains the information which was present in the lower sideband.

For one thing, we talk about 2 LO signals 90º apart. But what determines which one is which? Ie, if I were to mix the incoming signal with only one LO output or the other, the incoming signal would not know the difference and in either case would give me difference frequency between the carrier and the baseband. It would look the same whether I heterodyned it with a sine wave of a cosine wave, because who knows what phase angle either of those waveforms would be to the carrier? It could be anything. At least in traditional superhet radios, it didn't matter.

So then why is I the "in phase" signal? In phase to what? The carrier? But then, following the reasoning of the previous paragraph, why would this matter?

Imagine I have a transparent wheel, which has a black disc inside of it at one point near the edge. Now imagine I shine a light through the wheel's diameter from the side, so that the shadow of the disc appears on the wall. If I spin the wheel, you can watch the shadow going up and down on the wall in a sinusoidal pattern. If you graphed the height of the shadow on the wall vs. time, you could tell the frequency of the sine wave, and therefore the frequency of the wheel's rotation. But nothing you recorded from that shadow could tell you whether the wheel was spinning clockwise or counterclockwise!

Now imagine I added a second light, above the wheel (at a 90° angle from the first in the plane of the wheel), casting a shadow on the table below. This shadow will also move in a sinusoidal pattern, at the same rate as the other one, but with a 90° phase shift, and you could recover exactly the same frequency information by watching this shadow alone.

But if you recorded both shadows at the same time, you might notice that in some cases the "positive peak" of one shadow is 90° ahead of the other, and sometimes it's 90° behind instead. And in fact, the one case is when the wheel is turning clockwise, and the other is when the wheel is turning counterclockwise. (It doesn't matter which axis you define as the "first" axis, which direction you define as positive, or which direction you define as clockwise... as long as you make a choice and stick to it. Any change to one of them will swap the sign of your result).

So, sine and cosine are both 1-D projections of something happening in 2-D. With only one of them, we can't distinguish a "positive" frequency from a negative one, but with both of them, positive and negative frequencies behave differently, and we can use this property to recover information from frequencies that were downmixed "below zero" without running into the aliasing problems that we would have if we only used one.

Some quick definitions: a sinusoid with angular frequency $\omega$ and phase $\varphi$ at time $t$ is:

Now let's consider a scenario: we have an ideal mixer with an LO with $\omega = 1$ and variable phase, and we want to produce an output at $\omega = 0.3$. We know we can do that with an input to the mixer with either:

We are going to consider four ways we might mix: 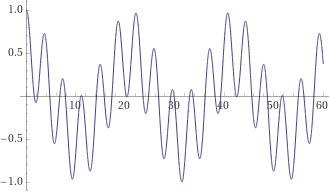 So we can say:

Here, $\dots$ denotes the higher frequency term that we don't really care about for this example.

OK, the higher frequency term has changed of course, but the $\omega=0.3$ term we are interested in is exactly the same. It doesn't seem like there's any way to differentiate negative from positive frequencies from this.

OK, there's still an $\omega = 0.3$ output, but the phase has changed. That would make sense, because the phase of the LO also changed. Moving on...

Similar to the last case, but the phase has flipped by 180 degrees. It seems the phase of the mixer's output changes depending on whether the input was above or below the LO!

When multiplying two sinusoids of the same phase, the output does not depend on whether the input to the mixer is above or below the LO.

But when the LO and the mixer input are 90 degrees out of phase, the output will be inverted, or not, depending on whether the input was above or below the LO.

If you think about this as plotted on the complex plane, two sinusoids 90 degrees apart will will trace a circle:

image source, which is unfortunately no longer online

If you invert one of those functions but not the other by moving the signal to the other side of the LO, the result is tracing the same circle but spinning in the other direction.

If you want a purely real function, then what you need are two circles spinning in opposite directions. Added together, and in the right phase, their imaginary parts will cancel and you're left with only the real part.

And the same logic in the other direction, if you start with a purely real function, "under the hood" that's two circles spinning in opposite directions, a positive and negative frequency counterpart.

Above baseband, that LSB signal isn't really negative, just lower than some reference frequency (the carrier).

When an RF signal is singly modulated down to baseband, its LSB will alias with its USB and thus both sidebands will get mixed together into a single signal. And if you FFT any strictly real signal (non-DC), you will see a complex conjugate mirror image. And can't tell original (before mixing) USB from LSB data.

When quadrature modulated down to baseband, you get two resulting signals.

When mixing (by multiplication) two sinusoids different in frequency, a beat note at the difference between the two input frequencies will appear. The zero crossings of the beat note will appear when the 2 sinusoids are temporarily 90 degrees apart, e.g a peak of one sinusoid near the same time as a zero crossing of the other. The peaks of the beat note will occur when the peaks of the two sinusoids either align or go in opposite directions. Which (same or opposite peak alignment) happens next will depend on whether the difference between in frequency between in input signal and the modulating signal is positive (higher) or negative (lower).

And you can thus "get" one or the other sideband by looking at the FFT result, or any similar process.

A less mathematical answer, this sentence: "Then, if there is a modulated (say AM modulated with voice) frequency of interest, we can tune the LO to the carrier frequency, and because of heterodyning principles we are now only having to deal with the baseband frequencies, which is much easier/cheaper to digitize." When the LO is tuned to "the same frequency" the LO phase matters. If you arrange the LO phase to be 0 degrees with respect to the carrier phase you have a synchronous AM detector. The output would be the amplitude of the carrier - i.e. a DC voltage with the AM modulation on it. In case the phase would be 90 degrees, the (average) DC output would be zero and independent on any AM modulation. In case there is any phase/frequency modulation the output would be proportional to the phase offset times the carrier amplitude.(One can use that to phase lock the LO.) In the SDR world the LO might be close to the carrier so the phase would rotate slowly. That means that the AM component and the FM component would rotate between I and Q. To detect AM one would compute the square root of I squared + Q squared (after having filtered I and Q to remove unwanted frequencies) while the phase would be atan(Q,I). The frequency is the change of phase with time. That gives an FM detector. This works also if the LO is far from the carrier frequency of the desired modulated signal.

In fact the pair of I and Q at sample rate F can be transformed to a single stream of samples at twice the sampling rate 2*F without any loss of information or S/N ratio. This can be done in the analog world as well as in the digital.

In an SDR we have usually one A/D converter that gives amplitude vs time. It could be a data stream at 80 megasamples per second. We could apply a digital bandpass filter at 7 MHz with a bandwidth of 1 MHz and then reduce the sampling rate to 2 MHz. As an alternative we could apply two mixers in quadrature to get two signals, I and Q at 80 MHz sampling rate, then apply two low pass filters DC to 1 MHz after which we could downsample to I and Q at 1 MHz. The second strategy turns out to be far more favourable in terms of cpu (fpga) load so that is what we use, but both processes are equivalent.

Not the answer you're looking for? Browse other questions tagged software-defined-radio dsp or ask your own question.

6
How can quadrature mixing adjust the phase of all frequencies by the same amount? Can it be done in the digital domain?
2
How is the Hackrf able to achieve 20MHz of bandwidth with an ADC that only allows 22Msps?
3
Can left-hand and right-hand circular polarizations exist at the same time?
2
Heterodyning complex values in gnuradio

9
Is there a name for the demodulation technique described here using the parallax propeller?
6
How does rpitx generate arbitrary SSB data with a clock peripheral?
1
SDR demodulation of SSB
7
GNU Radio sinusoid multiplication does not produce perfect results
4
SDR as an oscilloscope
6
How can quadrature mixing adjust the phase of all frequencies by the same amount? Can it be done in the digital domain?
2
Heterodyning complex values in gnuradio
2
Transmit filter for Amplitude-shift keying
6
How does IQ modulation work (intuitively)?