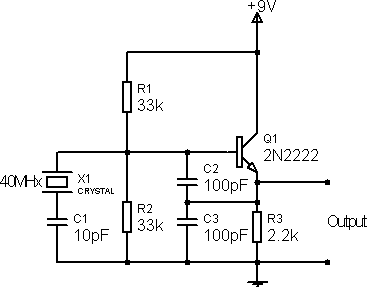 I am working on a project designing a 40 MHz radio transmitter, but I need some clarifications. I need to know how to calculate its output impedance.

I know how to calculate common collector's output impedance, but this circuit has 2 capacitors (C2,C3=100pF) in series which are connected to the emitter.

This is not a linear circuit that can be described only with its output impedance. Insert an impedance buffer when using the signal. And indeed: the effect of the buffer rises the same question, but at a different level.

Your question is the output impedance. It is an emitter follower with a resonant circuit. Put it in a simulator. I guess it will be a few hundred Ohm's or lower. PA0FSB

Not the answer you're looking for? Browse other questions tagged impedance equipment-design voltage or ask your own question.

3
How to calculate the peak-to-peak voltage of a sine wave given RMS voltage
10
How to design a rubber ducky antenna
11
Why does "high SWR" damage transmitters, instead of "impedance mismatch"?
0
How much voltage is on a typical high power (1000mw) 2.4Ghz WiFi antenna?
3
What is the output impedance of a typical solid state ham transmitter?
3
Multi-band Crystal Receiver?
1
Toroid Coupling Issue in Common-base Amplifier
2
Voltage wave in transmission lines
1
RF PCB Design Difference Between Controlled Impedance Track and Impedance Matching Circuit
5
Measuring Output Impedance of an RF (HF/VHF) Active Circuit with Hobby-level Tools