How to make a loop antenna for HF?

While researching this answer, I came across information that indicates that a many good Low Frequency/ Very Low Frequency antennas are loops, with high directionality and good overall characteristics. Can the same thing be easily done with HF signals, of having **some size of a loop with an appropriate amount of antenna coiled together? **

An example is this image from Wikipedia 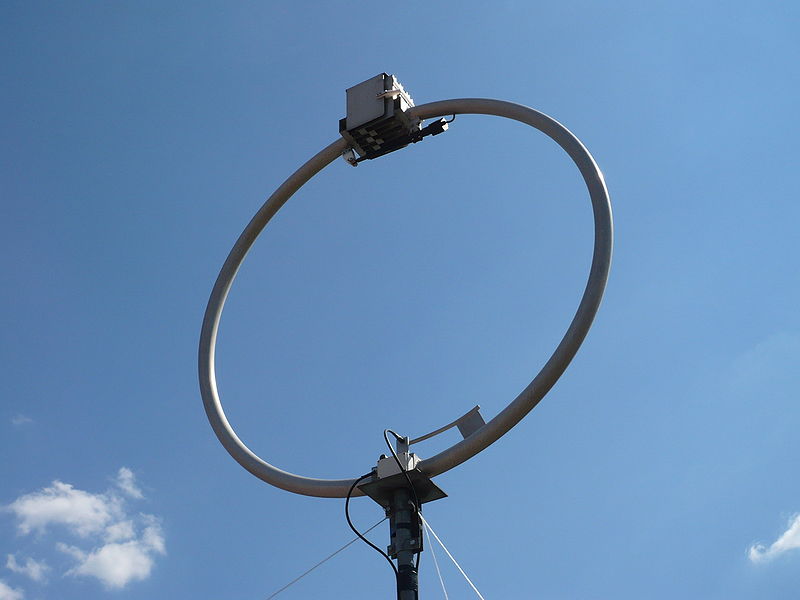 Specifically, the antenna in your picture is a small loop. This is quite distinct from the resonant loop, where the circumference of the loop is equal to the wavelength. Resonant loops are essentially folded dipoles that happen to be round.

Yes, these antennas work at HF also. There are some reasons you may want to do so, but first let's examine the advantages of a small loop at ULF. Their applicability to HF is then apparent.

Firstly the obvious: it's small. When the wavelength is several hundreds of meters or more, a practical antenna is going to be electrically small.

If we just want small, why not a short dipole? This is certainly possible, and since the short dipole is the electrical dual of the small loop, the two should be very similar.

Because at ULF, ground wave is a significant mode of propagation, and ground wave works very much better in vertical polarization, ULF transmissions are most usually vertically polarized. While short dipoles and loops have the same pattern, the nulls point in different directions: for vertically polarized antennas a dipole's nulls are up and down, while for a small loop they are in two directions on the horizon. Thus, with a loop you can null noise, while you can't with a dipole. Thus, the "high directionality" of a loop, even though it's really not any better than a dipole when considered in three dimensions and free space.

At HF, size may be less of a concern. Also, since the usual propagation is skywave, where the ionosphere randomly rotates polarization, we are not restricted to vertically polarized antennas.

Beware, there are many popular small loop designs among amateurs, and many of them are of rather poor design because they unbalance the antenna, and consequently the feedline becomes as much of the antenna as the loop. There's some folk wisdom among amateurs that HF loops are somehow quieter, but the reason is that they are different, not magic.

I have built a magnetic loop that tunes 15m - 40m and am quite happy with it. As stated they are not magic, but have the advantage of being small and rejecting nearby E-field noise. Small is important if you are unfortunate enough to live in an area that is not friendly towards antennas. The radiation resistance of a small loop is low, so to get decent results you have to keep the ohmic losses to an absolute minimum. This means high quality conductors and very low loss capacitors, such as vacuum variables.

Do a google search for 'helically loaded magnetic loop', this is the design I built. I am very happy with its performance and you will find a lot of others with similar experiences. It's not cheap to build but the results are worth it and it handles the full legal limit. The Q is extremely high so an additional benefit is you effectively have a narrow bandpass filter right out at your antenna. The noise floor is consistently several S units below that of my dipole. Don't skimp and use a cheap capacitor, you'll be disappointed :-)

Not the answer you're looking for? Browse other questions tagged antenna hf or ask your own question.

39
Using a balun with a resonant dipole
29
Can I reduce RFI/noise at the antenna?
11
What is a Gamma match in the context of the driven element of a Yagi antenna?
7
Why are there no amateur allocations in the LF and VLF spectrum?

5
How to construct a loop antenna for receiving HF?
3
How to connect this Active Antenna Loop and 100MHz Upconverter?
1
Antenna + LNA Design Questions
4
DAB antenna in roof space
3
Microstrip Loop Antenna Design
3
How should I select an HF antenna for portable work?
2
Is it possible to make antenna for one specific frequency?
7
How to make a ferrite bar antenna for RTL-SDR?
6
Loop antenna layout and radiation?
0
Loop on ground for transmit?