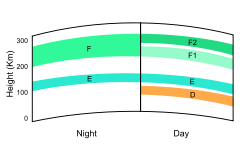 10
What's the difference between "maximum usable" and "critical" frequencies?
3
Setting up an HF Schedule
2
How does the antenna length affect signal transmission/receipt in different bands?

10
What is the best time of day/Band to make a contact with Hawaii from the East Coast?
8
HF Digital Mode Band Plan for the USA
16
What bands and modes will give me voice at 3,000 miles?
12
What are the relative bandwidths of the amateur bands?
5
Why are the lower HF frequencies not working during winter day time?
1
How to interpret VSWR results for an attic antenna
4
What causes the light and dark bands (of background noise) in an HF waterfall display?
4
What is the best time of day to contact Japan from the east coast?
0
Why does the HamQSL website say the 40m band is fair and the 20m band is poor during the day?