How does a smartphone FM antenna work?

My understanding is the earbuds that connect to the aux port act as the antenna. It's a long wire. The problem is that the same wire is being used to power your earbuds so you can hear the radio station. This is common on iPods, Zunes, and Smartphones. How can it be an antenna and push audio at the same time?

The current on the wire (let's assume there's just one, to simplify) is just a sum of both the AF and RF signals. Imagine a greatly simplified situation where there is an unmodulated RF transmission at 103 MHz, and an audio tone at 440 Hz. The voltage on the wire is something like:

Of course in practice, the FM station isn't broadcasting just an unmodulated carrier, but a more complex waveform. And there aren't just 2 terms in this equation, but thousands: the sum of all the radio transmitters around. And also there's a noise term. But the basic principle stands: the voltage on the wire is a sum of all the things interacting with it through the electromagnetic field.

The FM receiver has a filter, not just to isolate the RF from the AF, but also to select the particular station you want to receive. So it's going to ignore all frequencies except for a 200,000 Hz wide slice somewhere in the FM band, so it sees only the $\cos(103000000 \cdot 2 \pi t)$ term.

Likewise there's a low-pass filter between the audio driver and the wire, isolating the audio circuit from all RF.

It's not magic, really. Filters are everywhere in everyday life. Your eyes, for example, have 3 kinds of cone cells each sensitive to a different range of frequencies. These cells are sensitive to a specific range of frequencies because they filter out all other frequencies. And visual light is just a small slice of the electromagnetic spectrum, but your eyes filter out most of it. It's for this reason you can't see infrared, x-rays, or indeed even the FM radio station you are listening to on the radio, which is electromagnetic radiation exactly like your eyes detect, just at a different frequency.

There are other engineering applications of this principle too. For example, power-line ethernet superimposes a high-frequency data stream on top of the 60 or 50 Hz power that's in your home's mains wiring. Many antennas that require power are powered through their feedline with a bias tee, which allows a DC power feed (0 Hz) and the RF signal to coexist on the same feedline. Phantom power for microphones is the same idea applied to audio frequencies. 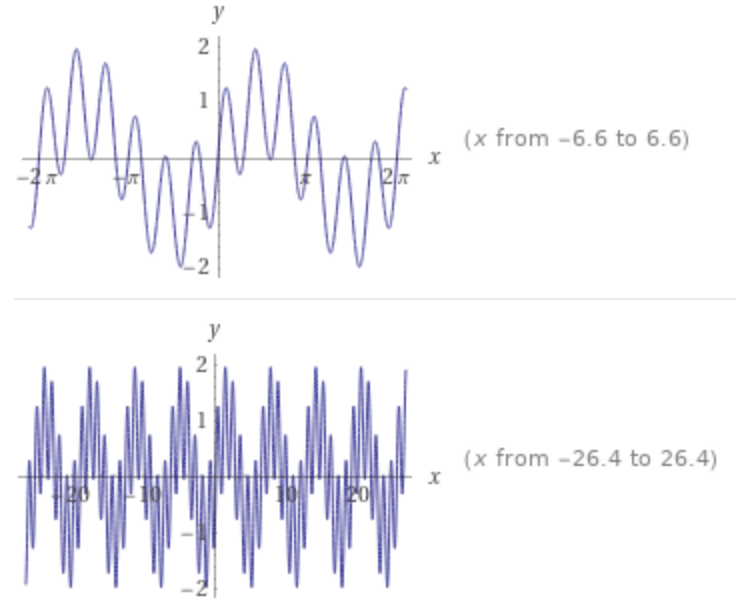 Just by looking at it, you can see there are two sine waves here, a low-frequency one and a high-frequency one. They can both exist within the same function without any loss of information. And with a filter, they can be separated.

FM broadcast RF frequencies(88-107 MHz) are independent of lower frequencies in the the audio domain even of they share the same wire.

The earbuds only respond to ~30 to ~3000 KHz thus, ignoring(filtering) the RF on the same wire.

Along the same idea, the radio receiver is tuned to 88 - 107 MHz ignoring(filtering) the audio frequencies. The tuner circuit will exclude all of the lower frequencies by design.

On the earbud side, RF frequencies cannot be produced by the the earbuds, they appear as a short circuit to the earbuds and skip quite happily over them, and are then passed on to the tuner.

Remember that waves continue on no matter the frequency (unless identical frequencies that add together depending on phase either constructively, adding to the power output or destructively reducing the power output through increased standing waves.)

The incidental overlap of destructive possible interference of AF to RF is an instant point in time(every few time-spans) for waves moving close to the speed of light. The interference is so minute it is not detectable using electronic means.

For all practical purposes the frequencies on a line are independent of each other.

Quite apart from the huge difference in frequency, another point is that, for the earbuds, the two conductors of the cord carry a "differential" signal. In other word, they, with the earbuds, constitute a complete circuit, break one conductor, & your earbud won't work. As an FM antenna, however, the RF pickuo is "common mode"-----to the RF signal, both conductors appear to be part of the same conductor. The phone's FM radio input circuits have inherent rejection of the differential component.

2
Airband Jammed on Yaesu VX-6R
5
How is RF a radio receives just not a mishmash of eletromagnetic energy?
2
How does the antenna length affect signal transmission/receipt in different bands?
1
How to best connect an FM transmitting GPIO pin to an antenna?
5
What ways are there to extend an antenna?
1
Impedance matching between antenna and load - Theory and Practice?
0
Strong but unreadable signal received on 2m FM voice, transmitter less than 2km away. What could be the cause of the readability problem?
0
Antenna Basics - Open/Short Circuit & Half-Duplex/Full-Duplex
1
How to match transmitter to Beverage antenna
5
How can a tuner pick up a specific frequency?