Anyone know what this antenna is? 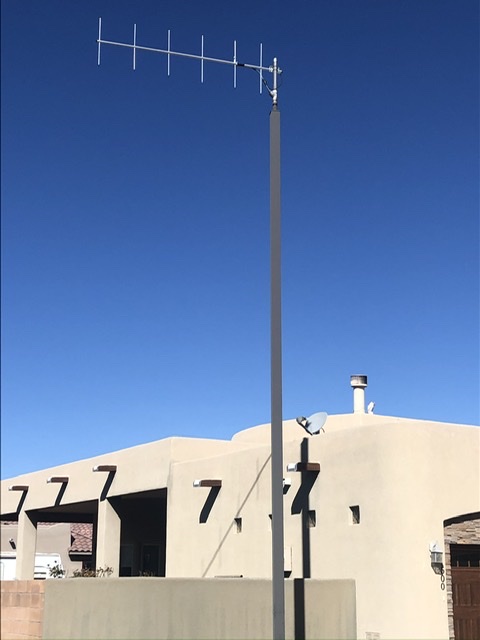 Hello, what kind of antenna is this? I’ve been trying to figure it out for 14 years. None of my neighbors know. Whomever installed it either moved or passed away.

The antenna is a Yagi-Uda, or Yagi, antenna. It is a highly directional type of antenna (and this one has 4 director elements, making it particularly so). Yagi antennas are recognizable by the structure of having a series of parallel elements (rods) of slightly varying length, with the feed line (wiring) running to the element adjacent to the rear "reflector" element (the longest element).

A directional antenna with a fixed (not rotatable) mount is only useful for point-to-point communications; in other words, it's pointing at a specific other station with its own antenna (which may or may not be directional). Possible uses for this include:

Another common use of directional antennas mounted on poles is for television reception, but television antennas are generally horizontally polarized (the rods would be horizontal rather than vertical) and closer to the log-periodic design than Yagi-Uda (because they need to be able to receive many different stations and thus need a wider frequency range).

10
How to Evaluate Antenna Data
2
Will these wires affect antenna performance negitavely?
5
Can my small ham radio antenna interfere with WiFi in my RV park?
1
VHF / UHF - Terrestrial Circular Polarized Antenna
1
How to calculate/estimate the effect of having conductive material nearby an antenna
12
What kind of antenna is that one?
5
What ways are there to extend an antenna?
1
Removing the whip on a 2m/70cm antenna makes no difference
1
Yagi performing far worse than a dipole
0
1/8 wave 3-element 2m beam antenna