I know that there have been many similar threads on this, but I still need clarification. At the moment, the only thing I have is a 500' roll of RG-6 and a (very) tight budget, and I should be getting this cheap VHF/UHF 25W mobile soon (mostly going to use it as a base though).

Question: Could I safely use this coax and radio safely? Would I have to do anything "special"? Would this vary with the type of antenna that I use?

Well, according to the spec tables in the manual the thing expects a 50 Ω antenna impedance.

Mismatch means a loss of signal energy. How much exactly depends on the length of the 75 Ω transmission line – this makes a system much harder to design predictably.

in general, 75 Ω line can be made lower-loss at the same cost. If you know your spool of 75 Ω is "fresh" as in "no water has seeped in from the ends", it's probably wisest to simply match. The matching circuit for a single band (especially if it's as low in frequency as VHF) is easy (you'll find plenty of examples on the web), a series inductor and a shunt capacitor, and cheap.

So, you'd technically need to match your transmission line to your radio's impedance, and/or vice versa.

But, looking at the antenna connector on your device: 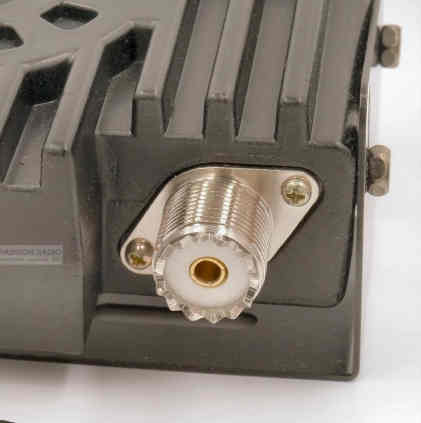 That's SO-239, for a PL-259 connector! No way that's matched to any particular impedance. These connectors should have been dead since ca 1948, and really are sub-par. That means that no matter what the impedance of the electronics inside are, the connector ruins them. It's also definitely not designed to go as high as 480 MHz like your radio. By far not.

You might be losing a bit of power with your 75 Ω line, because the device might actually be maybe 60 Ω (I really doubt you can make this connector be as low as 50 Ω at 500 MHz, it's just too friggin large), but you might also be in luck and your device is closer to 75 Ω than the manual claims.

So, heck, just connect your 75 Ω line to this. It shouldn't work great if the datasheet was right, but should still work with a high probability, but the manual very likely isn't right, so here's to "best effort".

Would this vary with the type of antenna that I use?

Yes. Just as your transceiver, the antenna needs to be matched to your transmission line impedance.

In your case, you need to match your antenna to the 75Ω line, but that's often as easy as soldering in a capacitor and inductor and that's it. And again, you can probably just ignore all this, because we know so little about the radio that all things that we optimize might simply be going in the wrong direction.

Smith chart shows that 50 Ohm antenna (assumed perfect 50 Ohm real!) connected to 75 Ohm coax cable can result in impedances between 50 and 112.5 Ohm. SWR 1: 1.5. So this so far not mentioned possible solution in this thread may be usefull for your problem: for a single frequency, or for a small frequency band, the use of cable with a multiple of half wavelengths (electrical wavelength! I.E. calculate the physical length from the shortening factor of the cable!) can give or maintain impedance matching. Recommended is measurement with a NanoVNA to assure the impedance at the antenna connector before powering up the transmitter. PA0FSB

Not the answer you're looking for? Browse other questions tagged antenna coaxial-cable impedance impedance-matching feed-line or ask your own question.

17
Understanding coax impedance
12
Is there an optimum Antenna Feedline Length for mobile installations?
1
What is the best type of feedline for a base UHF VHF ground plane antenna with a distance of around 50-75 feet of coax?
2
Weakly directive VHF/UHF antenna
0
Understanding RG6-75 ohm Cable Impedance
2
144/430 MHz antenna on 155 MHz?
11
Is "low loss" cable required for HF?
6
Any reason not to choose a discone antenna over a Wide/ MultiBand mobile antenna for TX/RX operations
4
What is the best frequency to start working EME on a budget?