Why is it bad to put ground rods too close together?

It's understood that ground rods should be spaced by a distance equal to twice their length. I read one source that claimed reduced effectiveness if the rods are closer than that. Is that correct? Or would putting them close together simply be a waste of materials because it would require more rods?

Depends on how you want to look at it. Two ground rods spaced close together will be less effective than two rods with sufficient spacing, but still at least as effective as just one rod. So it's not like adding the additional rod will make things worse, but it won't add as much as it could have.

The reason for this: the real earth isn't a perfect conductor (in fact, pretty far from it). You can think of it as something like an infinite grid of low-value resistors, with "true ground" out at infinity. If you raise the voltage at one point (by feeding a current into your ground rod), each resistor will drop a little bit of voltage, and the potential at any node in the grid will be a decreasing function of the distance between that point and the voltage source.

Now consider adding a second ground rod — the further it is from the first one, the lower the potential at the point where it ties in, and the more current it will be able to accept, and vice-versa.

Caveats of this simple explanation: of course, it should be a 3D mesh, and not a 2D grid — this affects how quickly the potential drops off, and also explains why the length of the ground rod matters. And this explanation is done at DC — for RF (or lightning, which has a very fast rise time), you would rightfully want to consider capacitive and inductive contributions as well. But hopefully it gives you a rough intuition of why you need to space ground rods apart to get a benefit from having more than one.

One of my favorite lightning anecdotes is this story by W8JI. He had lightning strike a tree, blowing the bark off down the trunk, and making a huge hole in the ground. And then some 20 feet away, the current arced to a Beverage antenna and traveled the length of the antenna to get to the ground on the other side of the antenna. 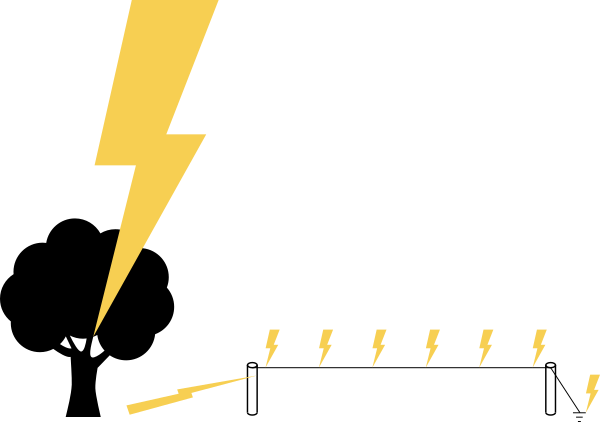 The reason for this is soil is a pretty poor conductor. The strike isn't done as soon as it hits soil. Lightning is transferring a huge quantity of electric charge into the soil, and all that charge now wants to spread out over the entire Earth. This means high current in the soil, and since the soil has resistance, by Ohm's law this also means high electric potential.

The potential was high enough to create an electrical arc several feet long so the strike current could get to the antenna wire, which presented a much lower impedance path to the distant ground. 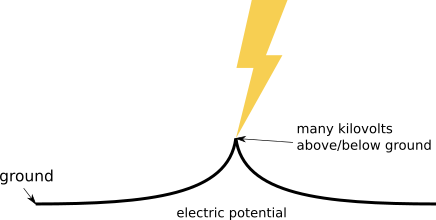 If one ground rod is placed near another, the current from one ground rod will increase the electric potential of the other, thus making it a less effective sink for current. Two ground rods near each other is never worse than just one ground rod, but increasing the spacing of the ground rods reduces their interaction and makes an overall lower impedance path to ground.

Putting ground rods too far apart is also not ideal, because at some length the inductance of the conductor between them becomes detrimental. The optimal spacing depends on soil conductivity and what's connecting them, but a simple rule of thumb is the distance between ground rods should be equal to the length of the rods.

Too close and not much better than just one of the rods hence making the second one a waste of time money effort to put in.

19
How can I protect equipment against a lightning strike?

8
Why is an RF ground not as critical as the other, and can they be used backwards?
7
Using Earth as an RF ground
2
Low frequency noise on ground line. Why?
1
MIC microphone ground vs common (PTT, chassis etc) ground
4
Antenna, input and ground bonding
3
Not-too-distant saltwater ground
4
How do I interpret the FCC ground conductivity map files?
0
Where am i supposed to ground the audio path?
3
Grounding for lightning safety - upper floor (UHF/microwave antennas)
0
Why are many ground radials preferable to a single ground stake buried 1m deep?