I have an EARCHI EFHW (40:1 unun)antenna that I used quite successfully until it fell from a tree. I wasn't able to get it back up, so ran it along my wooden fence temporarily. Unfortunately, the wire was shorter than the original (~60 ft), and I had trouble getting it to match with a less than 3:1 SWR on several bands.

Somehow, I ended up adding a couple of shorter (about 10ft) lengths of wire to the antenna terminal of the match box. NOW the thing matches on 80-6 meters, with SWR of less than 3:1! And with a decent signal (I get out to South America for example). Note these are not like radials for a vertical which are connected to ground, these are connected to the center or positive terminal of the coax. Is this a sort of off center fed fan dipole? Whatever it is it works surprisingly well...especially on 80m! 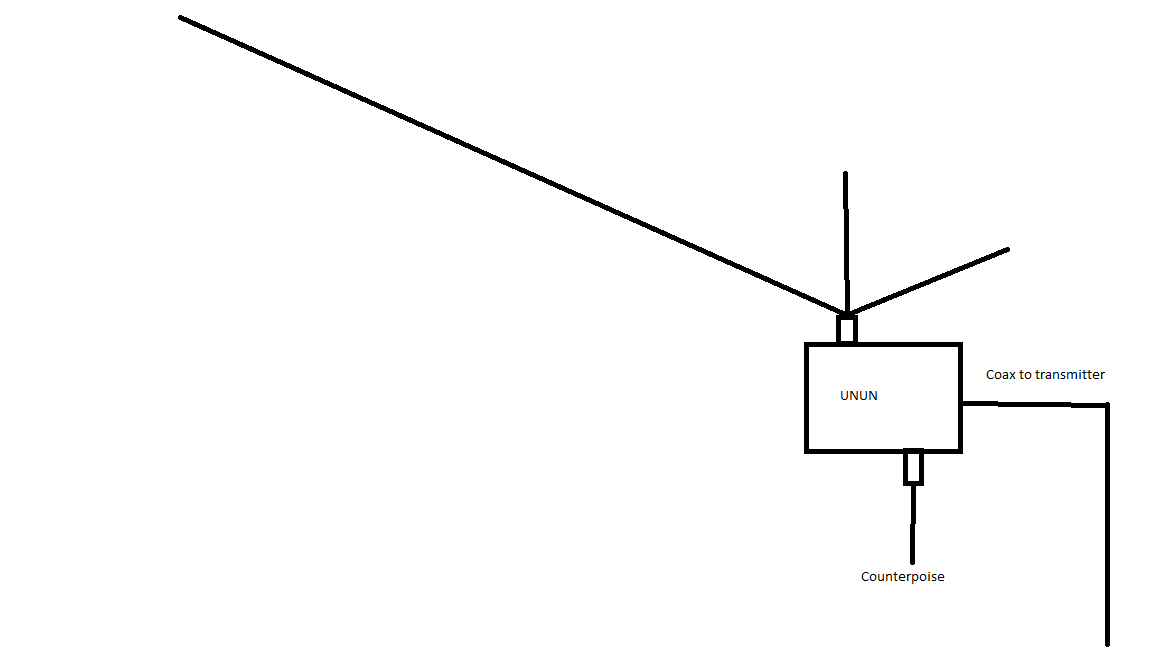 I have added the NanoVNA charts. Today I also raised the lower end of the antenna up to about 7 feet above ground. Note, these are WITH the wires. 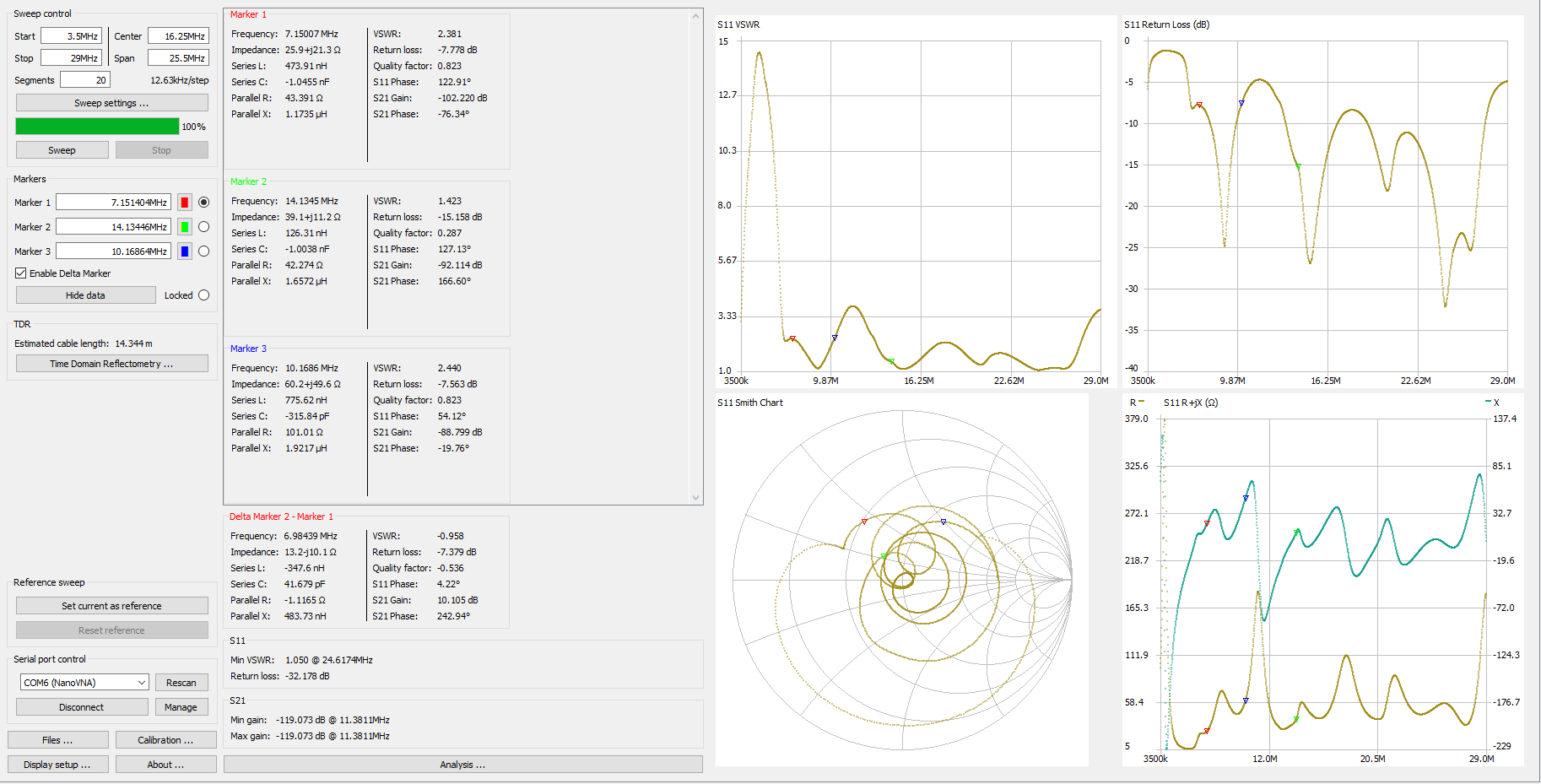 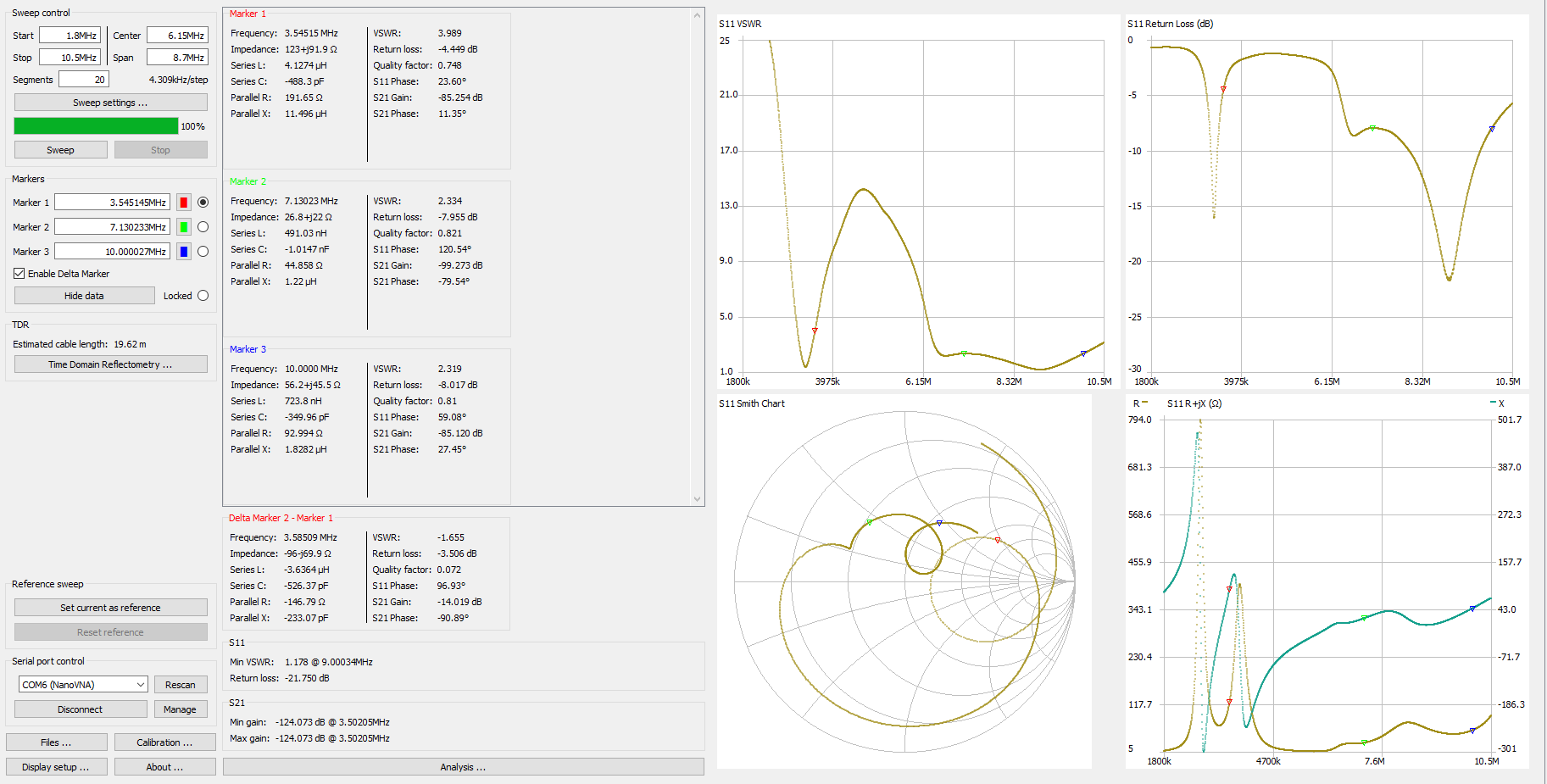 And these are without the wires: 3.9 to 29MHZ WITHOUT wires 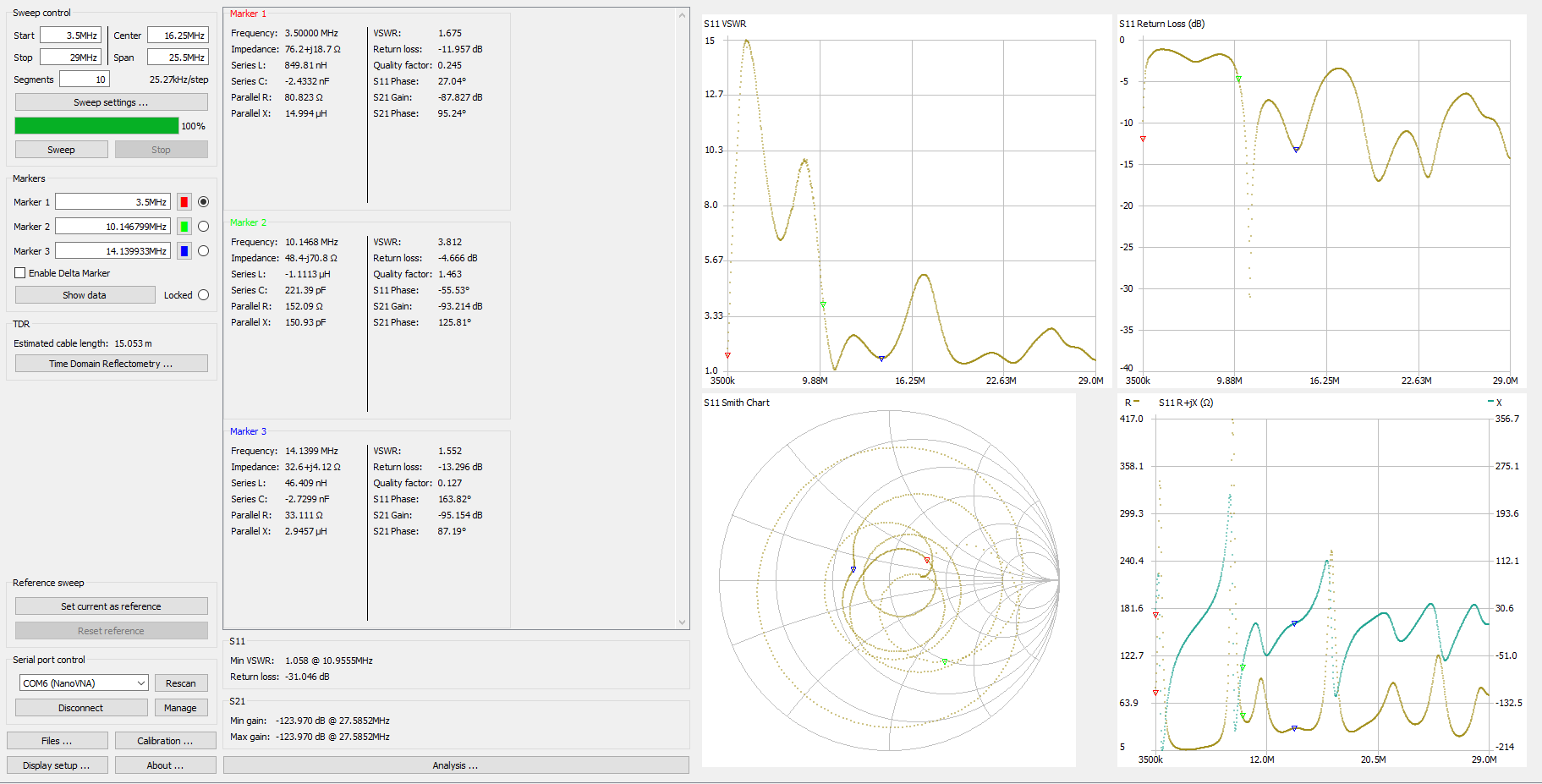 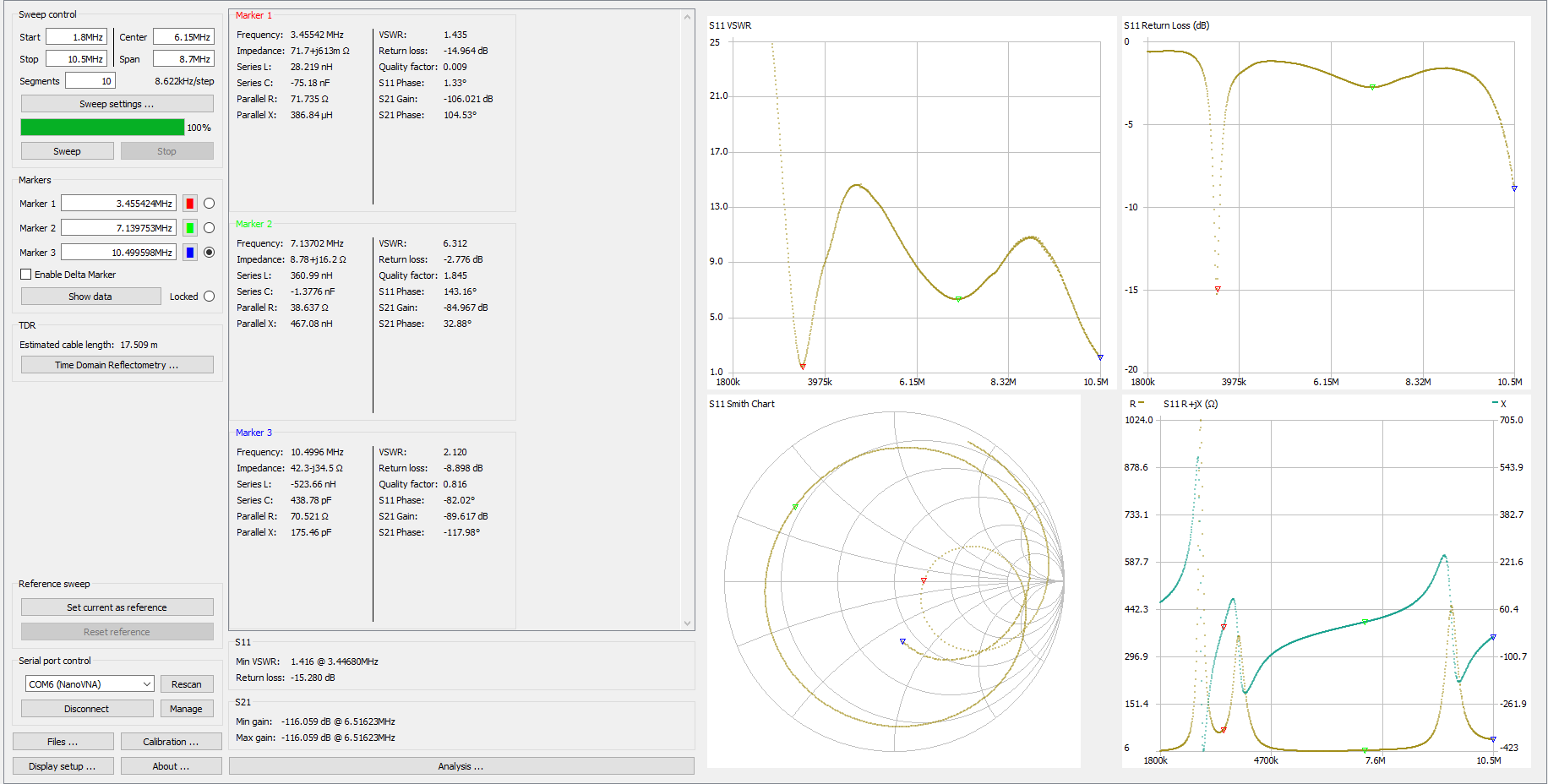 Some antenna designs use multiple parallel elements like this. For example, fan dipoles. Or, as you can see the Butternet HF9V has a couple parallel wires hanging off it in the upper half:

These extra elements add additional resonant modes to the antenna, which is what makes these antennas multi-band. In a fan dipole, if the elements are kept some distance apart they don't interact much and so for many fan dipoles it's effectively several dipoles in parallel. As you may know from parallel resistors, the resistance of the parallel combination is dominated by the lowest impedance in the group. This works if the impedance in question is the feedpoint of an antenna, too. When the elements get closer they also start to function like transmission line stubs which contribute to the antenna impedance.

In engineered antennas the length of these elements are selected deliberately to introduce a good match with good radiation on the design bands, but if you're starting with any wire of arbitrary length and add more wires of arbitrary length, you're effectively "rolling the dice". Since a "good match" is usually at the minimum of likely feedpoint impedances (excluding electrically small antennas) then adding more wires usually only makes things better.

Taking this idea of adding more wires to the extreme you get antenna designs like the fractal antenna which can be very broadband.

Note however that a good match and a good antenna are not always the same thing. A good antenna must additionally radiate energy (not just make the antenna or soil warm) and radiate that energy in a useful direction.

It looks to me like the additional short wires are acting like some kind of a capacitive load (which will be especially helpful on longer λs like 80m) AND a contributor to radiation (though certainly with an unusual pattern).

If you have a nanovna or similar, I'd love to see some plots with & without the shorter wires connected!

1
Can fanned/parallel endfed antennas be used to get higher gain in some directions?

5
Signal path to maximize RFI rejection in an urban environment
2
Bow Tie antennas impedance
5
EFHW works only on one band - what am I missing?
3
What is the radiation pattern of an ~60 foot end fed wire antenna used for 40 meters?
0
Loop a long wire antenna or EFHW
0
Troubleshooting the MFJ 1982 EFHW
3
Interpreting (noise) signals from a small untuned shielded loop
5
EFHW: better to get far end really high, or middle somewhat high?
1
Lightning Antennas 4 Element Quad Feed System Validity
1
Can fanned/parallel endfed antennas be used to get higher gain in some directions?