My questions is about placement of the polyphasor lighting suppressor.

I know that usually it is desirable to put the lightning suppression as close to the antenna cable entry point as possible, and then to ground it, but I was wondering if it would be acceptable to install the lightning suppressor about 25 feet from the entry point into the building, right before it enters the office building where the radio is, and then ground it with grounding cable clamped to a grounded pipe.

On the other hand, if it's right above the office, and it needs servicing, it's just a matter of using a standard ladder, and popping a ceiling tile. Keep in mind there are no offices above the first floor, only open space above the drop ceiling. 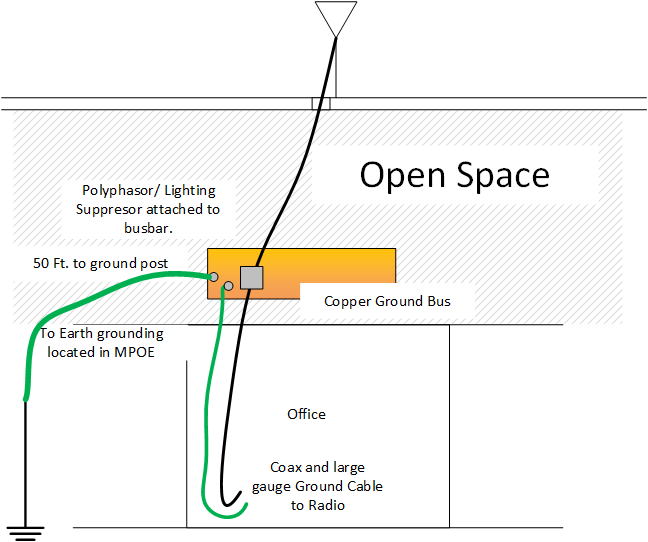 The picture you have drawn suggests a lightning suppressor installed in this way will do little to nothing to protect your station.

The suppressor does only one thing: it limits the maximum voltage between the center conductor and the shield. It doesn't do anything to limit strike current on the shield, which is where most of the energy is anyhow.

The protected equipment inside the office is almost certainly grounded either directly or indirectly through AC mains, Ethernet cables, etc. Remember that at the voltages lightning can generate, anything anywhere near something even a little bit conductive (like wood) is potentially a path to ground.

As such, a more complete picture of your proposal is: 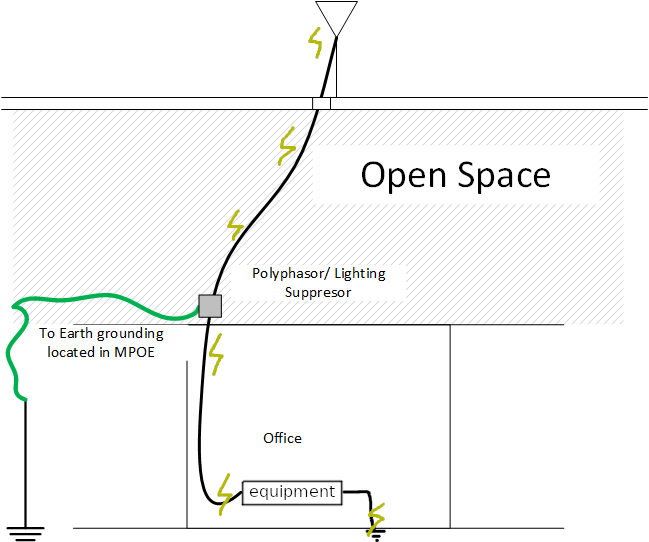 Note that you have multiple ground paths, and the one you've added in green has a high impedance because it is so long. As such, most of the strike current will go through your equipment.

As such, most of lightning protection is not about the suppressor at all, but rather:

To be effective, the connection labeled "to grounding" you've drawn: 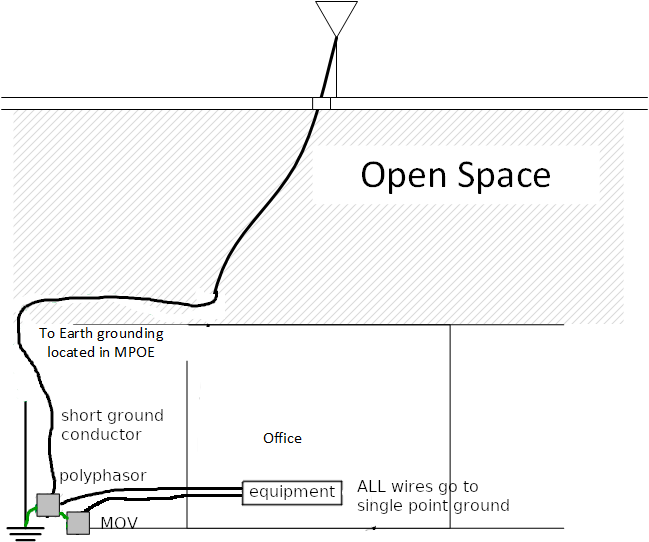 Importantly, all wires must go to a single point ground. At this ground point, everything is bolted to a conductive panel so they remain at the same voltage. Anything that can't be directly grounded (like the coax center conductor, and the non-ground conductors of the mains wiring) go through some protective device like a gas discharge tube or an MOV. And that grounding panel is near the ground, and grounded with a short, low impedance connection.

Ideally, the antenna feedline doesn't run through the plenum, since there's likely all kinds of conductive stuff in there (other wiring, HVAC ducting, ceiling support structure...) which would also provide a nice path the strike current will use, potentially breaking electronics and starting fires as it does so.

For additional detail, see How can I protect equipment against a lightning strike?

Therefore you want the shortest path to the air gap arc suppressor which is sub-picofarad higher impedance then the current will have a greater chance of following the ground wire.

The voltage induced may still be high but hopefully suppressed by a 2nd stage <~1kV suppressed with lower current in its path in the unit. This depends on coax cable quality, skin effects and mutual induction from the ground current 3kA to 75kA worst case for 1us. (<~1MHz mostly)

The best lightning protector blocks DC to 1MHz which is the bulk of the RF energy , so the equivalent circuit has 0.1 dB insertion loss in the RF band selected and shunts the antenna with an LCL or Pi filter for high pass or low block . An air gap or properly designed rugged proper gas tube is in parallel with the incoming shunt L then HPF with series C and output shunt L.

If there is nothing in the roof and below to divert the coax current and rising voltage to another electrical path with flammable materials or other electrical equipment, you may consider your original plan.

But if inside, there will be ground shift pulse with ringing, which now can radiate the diverted lightning energy.

Consult with supplier and show wire type and lengths of all from antenna to Unit and earth gnd.

Not the answer you're looking for? Browse other questions tagged grounding safety lightning or ask your own question.

19
How can I protect equipment against a lightning strike?
0
Ground pass through cinder block — copper pipe, braid, stranded?

8
How to keep a disconnected coaxial connector weatherproof?
9
Grounding VHF base station antenna
2
What would be the easiest and most cost effective ground system for a startup UHF/VHF station
1
Diamond X200A Lightning Protection
4
Bonding of Coax shield to RF ground conductor for long ground runs?
3
Antenna installation for a base station
1
How large and where should a perimeter ground be installed?
3
Grounding a chimney mounted antenna
0
ISOTRON 80m 75m Antenna Position
3
Grounding for lightning safety - upper floor (UHF/microwave antennas)