I am currently modeling a yagi antenna using Matlab and after I optimized the antenna, it gave me a director length shorter than the exciter itself (even if the optimization gave me a good gain).

From what I have read and learned from textbooks, the directors of a yagi Antenna should always be shorter than the dipole in order to help direct the EM waves forward in a specific direction, and hence, increase the directivity.

In fact, when I even tried to reduce the length of the director to a dimension shorter than the dipole, it gave me a lower dBi (9.17dBi instead of 13dBi).

Why does DirectorLength > DipoleLength gives better gain (dBi)? Shouldn't it be the opposite instead?

Properties of the antenna simulated with Matlab:

I suspect your results are an artifact of your optimization methodology.

I simulated the design described in the link with NEC2 using the EZNEC front-end. For reference, EZNEC calculates the gain as 13.03-dBi in free space with 2-mm diameter elements (the link doesn't specify element diameter). I believe this is close enough to your model's gain of 13.6-dBi for the purpose of answering your question.

EZNEC calculates the driving-point impedance of your model's driven element as 40-j99 $\Omega$, which is not a good match to the 50-$\Omega$ transmission lines in common use. Increasing the length of the driven element by about 14% - thus, making it longer than the directors - improves the match by changing the input impedance to 59+j6 $\Omega$ while maintaining the 13.03-dBi forward gain.

Interestingly, the driven element is now longer than the reflector, which is also not usual. The radiation pattern of your design show many side-lobes: 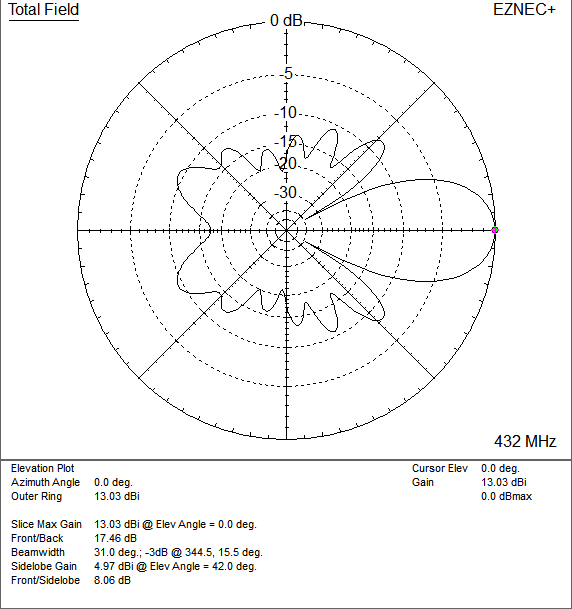 I suspect that "cleaning up" the pattern will result in a design with elements whose lengths obey the customary relationships seen in the hundreds of antennas described in the literature.

There are many properties of an antenna that could be optimized:

Typical designs aim for "pretty good" in all of these parameters. Optimizing for one parameter exclusively will typically come at the detriment of others, and result in unusual designs.

The driven element length is chosen to give the right impedance for your matching network. There's no rule about it being longer or shorter than anything.

The directors(s) are always shorter than the reflector(s) because their self impedance, combined with their spacing, is important in establishing the correct currents on each element.
(of course I mean simple thin free dipoles, if they're loaded or bent etc then their physical length doesn't reflect their electrical length any more)

3
Spacing between elements on a Yagi antenna
0
If one were to add reflector elements above and below a dipole would it change the direction to horizontal?
6
Is there any practical advantage to a parabolic reflector over a high-gain beam antenna?
5
Modelling a folded dipole
0
Outdoor Terrestial Digital TV Receiver Antenna: 500-700 MHz Band, Can I Make It Work Better?
1
Yagi performing far worse than a dipole
0
Why is there so little difference in the gains of Yagi Uda antennas with omnidirectional antennas? Shouldn't the power at the back be at the front?
1
Boom length of a Yagi antenna
0
Dual driven-element Yagi-Uda antennas