How is a feedline connected to this? 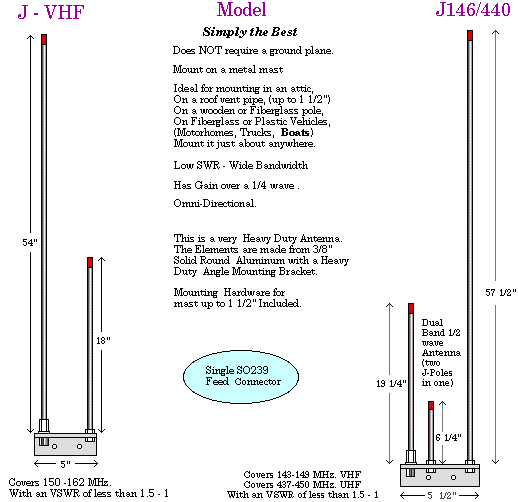 For 2m, the leftmost and rightmost element form the J-pole, and the center element is too short to matter very much. (It probably adds some inductance, which could explain why the left element seems a little shorter than it should be for 2m).

For 70cm, the center and leftmost element form the J-pole, and the rightmost element, being a little over 2WL long, isn't resonant and doesn't have much of an effect.

It's not super important whether a J-pole is fed at the "long" or the "short" element; since the leftmost (medium length) one is the one that both bands have in common, that's the one that gets fed. The coax center goes to the left rod (which is insulated from the aluminum angle). The coax shield goes to the aluminum angle itself, which the center and right rods are in electrical contact with.

18
Why do folded dipoles have greater bandwidth than ordinary resonant dipoles?
10
How does a “chip antenna” work?
2
Dual Band Antenna Matching
10
What is the impedance of an end-fed half-wave antenna?
2
Dual-band rubber duck gain on 2m vs. 70cm
2
Feeding a dual-band UHF and VHF Yagi antenna
4
How do I design a dual band LPDA antenna?
5
How does a Viper Antenna work?
5
Modelling a folded dipole
1
Trying to identify and understand this antenna design - ground independent dual band vertical