How to increase the bandwidth of half-wave dipole antenna?

Marcus and Richard have answered the question that you asked, how to triple the bandwidth of a dipole, with the correct answer that it can't be done. I suggest that you edit your question to give us more information about the problem that you're trying to solve and its constraints, and then we can offer more targeted suggestions. In the meantime, here are some generic suggestions of ways to increase bandwidth of an antenna system:

Below for "calibration" is a comparison of a case where the radius of the conductors stated in the OP was increased by a factor of 5: 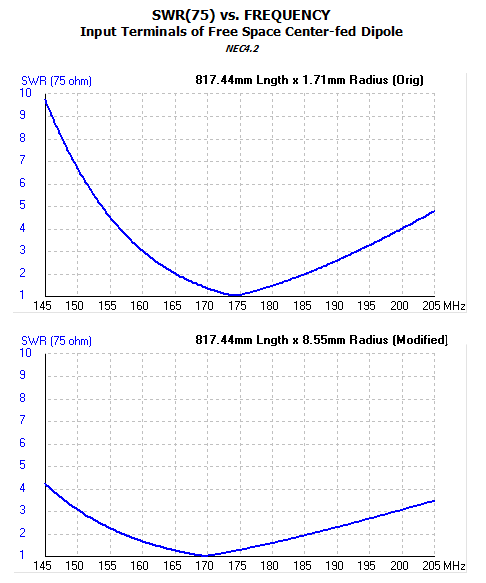 You can increase the bandwidth of a dipole by adding capacitive hats (you may have to shorten the dipole to maintain a given resonant frequency). Conical hats, hemispherical hats, or hats with a circular rim will work better than short 90 degree radial spikes at the ends, or an H shaped dipole.

Small capacitive hats might even raise the radiation resistance, as well as broadening the dipole's bandwidth. Maybe 10% or less in size compared to the long dimension of the dipole (which, again, will have to be resized to re-center the resonance frequency to the desired value.)

You also can increase the bandwidth by adding wires spread apart a little, and turning your dipole into either a cage dipole or a fan dipole. A fan dipole with each fan element a slightly different length will also broaden the bandwidth.

At the limit you can turn these (fan or cage) wires into conical sheets centered at the feed, and end up with a discone or biconical dipole, which have much wider bandwidths than a wire dipole (but are still 2-element dipoles of a sort).

After simulating in CST MWS, the bandwidth was about 18.64 MHz.

According to which definition of bandwidth?

I'm asking this because every antenna is a tradeoff. The easiest way, probably, to deal with this is to simply reduce your requirements for what "bandwidth" is.

How I can increase the bandwidth?

You're using a dipole, but you want a bandwidth of more than a fourth of the center frequency.

That's usually not going to work; you need a different design if you need to use a bandwidth that large relative to your center frequency, or relax your definition of "bandwidth".

You can of course help the situation by doing as Richard recommends: a larger-diameter conductor usually helps a bit with bandwidth, but I don't think you'll increase your bandwidth by a factor of 3 that way.

Not the answer you're looking for? Browse other questions tagged dipole bandwidth or ask your own question.