A few months ago, I built a 6 element yagi: 3 driven elements, and 3 reflectors. For 10-15-20m. I was able to tune it to SWR 1:1 for the FT8 frequencies in each band. This antenna is only 6m above ground, since that's what I can manage without guy wires (and the fact that steel tube is sold in 6m lengths too).

The 20 and 15m elements are coil loaded, as I didn't want the antenna to exceed my property limits, and I wanted to use whole aluminium tubes (which are sold in 6 meter lengths). I think this is the main issue here.

I've been happy with this setup for a few months, as I thought it was working properly.

Since my mom is also a ham, my dad installed a trapped 20-40m dipole. It's about 9m off the ground. It's only a couple of meters away from my yagi. I noticed her radio was getting FAR more FT8 decodes per cycle: while my computer only showed 3 or 4, hers would show 12 to 15.

So I've been trying to figure out what the problem with my yagi was. Here's what I tried:

I even tried taking the dipole down to rule out interactions between the two antennas, and lack of height in my yagi. And even laying on the roof, lower than the yagi, it works better in RX than my yagi, so I think it's neither height, nor interaction between the two.

I designed this yagi based on other designs online, and simulated it with 4NEC2. I built it down to the millimeter and it was very easy to tune: I didn't have to trim any tubes once I put it together, it just resonated at the calculated frequencies. The simulations did show lobes to the front (which I measured with a function generator and an antenna 1km away. Only a few milliwatts CW, while i rotated the antenna, and indeed, pointing the antenna towards the source gave me a higher reading, by 2 points in the s-meter: S9 vs S7), so the directionality was also spot on.

What's the problem here? Could it be that being coil loaded makes it perform significantly worse? It's only 7 meters long instead of the 10m required for a true half-wave dipole. Or is this a height problem and I should take it much higher than it is now? Lifting it is not an easy task. It would be expensive, too, so I would prefer to avoid it if possible at all. 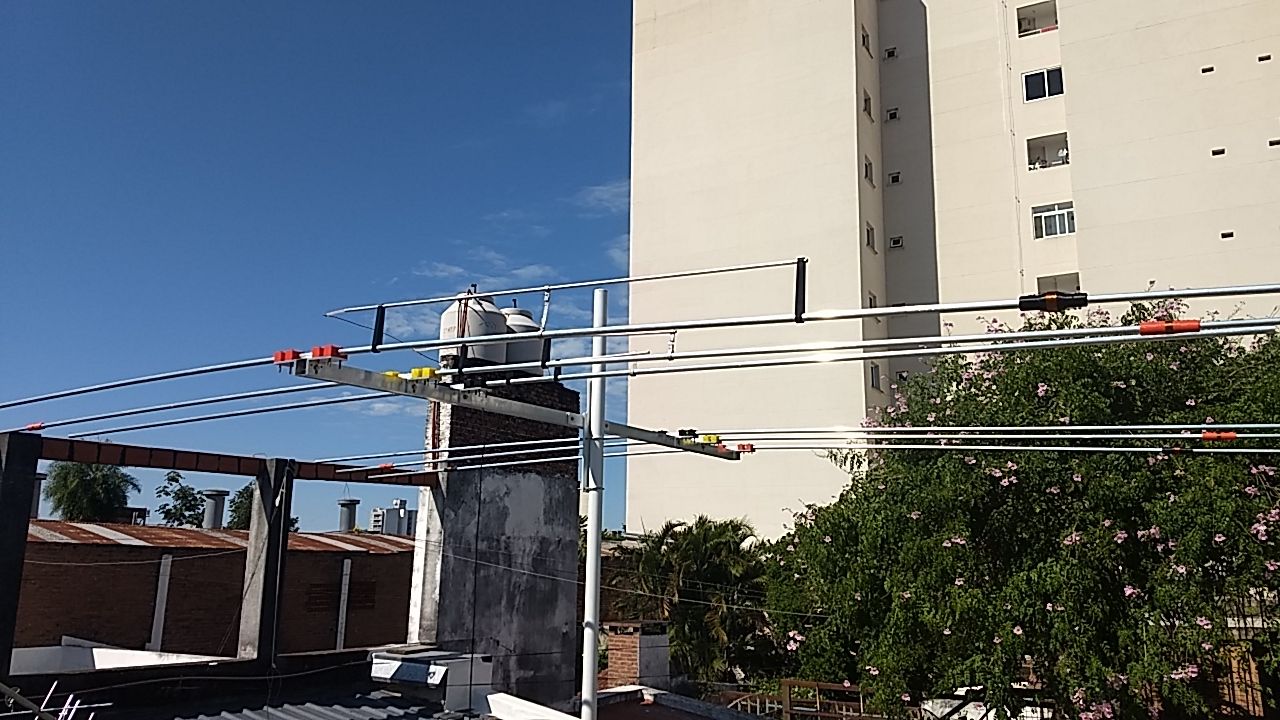 I don't think the antenna is the problem.

It sounds to me like one side of the feed line is open circuit at the antenna, if you are using coax the shield might not be connected.

This would mean you are effectively running a long wire antenna with a lump of 6 element yagi connected at the end.

The low SWR could just be a coincidence.

3
Spacing between elements on a Yagi antenna
11
What is a Gamma match in the context of the driven element of a Yagi antenna?
1
What is the best resonator in Yagi antennas?
5
Connect Printed Yagi-Uda Dipole Array with Balun to coaxial cable correctly
5
How to adapt commercial VHF yagi for 2 meter amateur use?
8
Estimating the efficiency of a shortened (loaded) antenna
4
Voltages in a beam antenna's passive elements?
2
Yagi: split or solid driven element?
4
Using a trap out of its resonance frequency?
0
Outdoor Terrestial Digital TV Receiver Antenna: 500-700 MHz Band, Can I Make It Work Better?