Where can I find a table listing the maximum PEP per band? 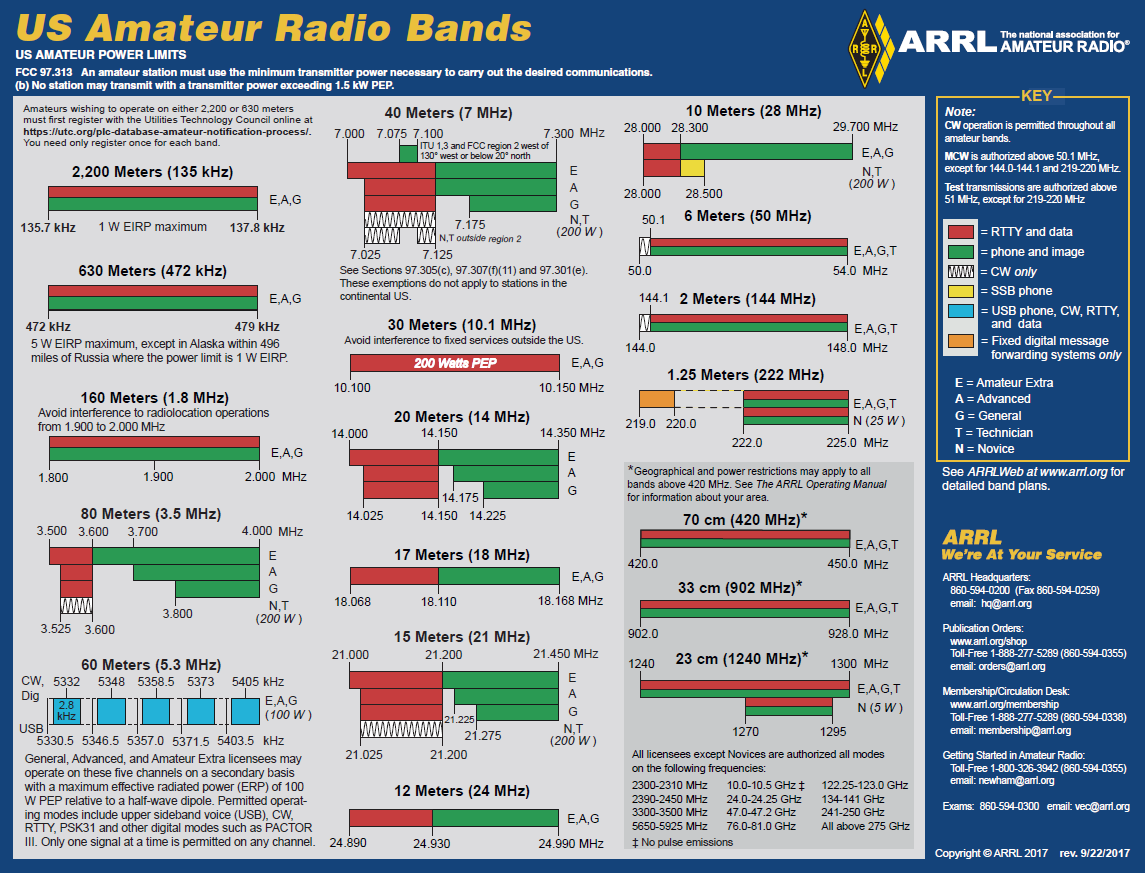 The ARRL's band chart (PDF) includes the maximum allowed power for stations in the United States and its territories. Sometimes the power limit depends on the license class of the operator and/or the band; in that case, the power limit is adjacent to the graphic for that license class and/or band. If no power limit is listed there, then the power limit is 1.5 kW, unless other restrictions apply. All power limits are measured as Peak Envelope Power (PEP) unless noted; the exceptions are the 2,200m and 630m bands, which specify Equivalent Isotropic Radiated Power (EIRP), and the 60m band, which specifies Effective Radiated Power (ERP). According to the chart, "Geographical and power restrictions may apply to all bands above 420 MHz."

According to Wikipedia, "PEP is normally considered the occasional or continuously repeating crest of the modulation envelope under normal operating conditions."

Wikipedia's definition of EIRP is, "the hypothetical power that would have to be radiated by an isotropic antenna to give the same ('equivalent') signal strength as the actual source antenna in the direction of the antenna's strongest beam." In other words, the EIRP is the PEP multiplied by the maximum gain of the antenna, where the gain is measured compared to an ideal isotropic antenna.

Wikipedia's definition of ERP is, "the total power in watts that would have to be radiated by a half-wave dipole antenna to give the same radiation intensity (signal strength or power flux density in watts per square meter) as the actual source antenna at a distant receiver located in the direction of the antenna's strongest beam (main lobe)." In other words, the ERP is the PEP multiplied by the maximum gain of the antenna, where the gain is measured relative to the maximum gain of a half-wave dipole, presumably in free space. I seem to recall that the maximum gain of a dipole in free space compared to an ideal isotropic antenna is +2.15 dB.

It should be mentioned that 47 CFR § 97.313 (a) says, "An amateur station must use the minimum transmitter power necessary to carry out the desired communications."

But of course it's not just per band... there are several limits that only apply to Novice license holders (none of those have been issued since 2000, but existing holders can still have them), one limit only applies to US territories outside of IARU Region 2 (i.e. places like Hawaii and Guam), a few apply within proximity to certain military bases, and one applies to... Arizona, New Mexico, Florida, half of California, the bottom piece of Nevada, and the western bit of Texas. Really.

So a universal table doesn't really work, but if you read through the actual requirements and pick out the ones that apply to you at your home QTH, then you'll end up with something nice and simple with a number per band.

5
Secure communication over Amateur-band HSMM / 802.11 in the United States
10
What is the best practice when tuning an antenna on air?
4
What are the geographical restrictions in using the 70cm band in the United States of America?
2
What restrictions exist for non-HAMs in the 5.8 GHz band?
1
Max legal power with nearly zero BW
5
How to find or derive the maximum safe input power to a receiver?
0
Can a carrier operated relay be used for T/R switching in a HF linear amplifier?
4
Is the 1.5kW power limit per antenna? What about antenna arrays?
2
Where can I find the official rules for Amateur Radio usage in Sweden
0
What is the maximum height I can go above the roof of my house