The suggestion has been made on various ham-related websites that improving the conductivity of the Earth around a ground rod produces a worthwhile improvement in the e-m radiation from a vertical monopole using that ground rod. How effective is that?

Below for some perspective on this topic is a NEC4.2 analysis showing the difference in performance of a 40m, 1/4-wavelength, unloaded, base-fed vertical monopole antenna system when driven against either a 5/8" OD or a 12" OD, copper-clad, 8-ft long ground rod buried in poor Earth (1 mS/m, d.c. 5).

Increasing the ground rod OD up to 12" is the equivalent of modifying the Earth in that radius area around a 5/8" OD ground rod to be nearly a perfect conductor of the radial r-f currents in the Earth around the monopole, that flow toward the ground rod.

An improvement in system performance results, but not a very significant improvement.

Regardless of the height of that monopole in physical, free-space wavelengths, minimizing the ESR of the entire ground plane within 1/2WL radius around its base is critical to the radiation efficiency of that antenna system. That ESR is a series circuital element with a large affect on the relative amount of r-f current from the source (transmitter) that will flow along the monopole itself.

RF energy dissipated in the ESR of a set of radials buried in soil is converted to heat, rather than to useful e-m energy radiated into space. 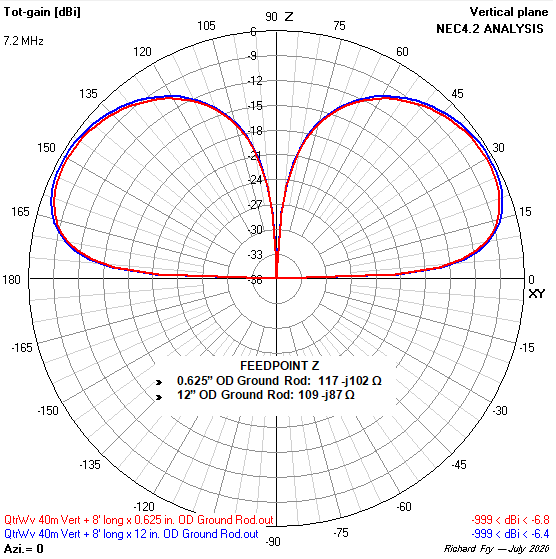 If by improving conductivity, you mean flooding several acres or square miles with ocean (or saltier) sea water (or via natural intrusion near a low lying shoreline or wetlands), or installing a solid copper floor several square wavelengths in size in the parking lot, yes.

But some people have reported improved antenna performance by putting a metal mesh of gopher wire (not too deep) under their lawn, with the vertical antenna grounded in the middle. Probably soldering or crimping adjacent mesh sheets is desirable.

Not the answer you're looking for? Browse other questions tagged vertical-antenna grounding efficiency or ask your own question.

7
Using Earth as an RF ground
2
Low frequency noise on ground line. Why?
2
Diamond X200A Lightning Protection
2
How do I specify that wires are connected in 4NEC2?
4
How Does Earth Conductivity Affect the "Takeoff Angle" of a Vertical Monopole?
1
Grounding plan for new ham shack - good/bad idea?
1
Troubleshooting 5BTV antenna
3
Should the earth rod be incorporated in the total length of an RF grounding system?
2
What do radials really do for a vertical antenna?
2
How does the material of a fishing-pole mast affect antenna performance?