Why are many ground radials preferable to a single ground stake buried 1m deep?

A dipole antenna does not require a connection to an "r-f ground" reference, either in the form of a ground rod or a set of buried radials. Its radiation efficiency typically is ~95% or more without it.

OTOH, a vertical monopole does require a path to an r-f ground reference, because that path provides the 2nd terminal of the antenna system, which is required to provide a complete circuit for r-f current to flow into and out of the source (the transmitter). Without that path, a monopole essentially has zero radiation of e-m waves into space.

R-F currents flow on, and just below the surface of the Earth out to a radius of 1/2 wavelength from the base of a monopole, as a result its radiation. The sum of those currents equals the current that flows along the monopole itself. Therefore it is important to minimize the I²R losses in that path in the area of Earth around the monopole.

The function of a buried ground rod or a set of buried radials used with a monopole is to collect the r-f currents in that area of Earth, and deliver them back to the antenna/transmit system.

The equivalent series resistance (ESR) at the operating frequency for a buried ground rod can be upwards of 50 Ω. But a set of many radial wires buried symmetrically around the base of the monopole can have an ESR of 1 Ω or less — which is the reason why buried radials are preferred for this application.

The purpose of the ground radials isn’t to ground the counterpoise.

The purpose of a dense field of radials is to emulate as much as possible a perfect mirror surface, so that, to the far field, the vertical monopole seems to have a mirror image half that makes the monopole seem more like a full size vertical dipole, with a pattern maxima orthogonal to the monopole (zero “takeoff” angle).

Whereas a buried rod doesn’t look at all like half a dipole to the far field. More like an extremely resistive, lossy, and too short counterpose, causing a much higher “takeoff” angle main lobe.

Similar to a dense field of radials, a large solid metal roof on top of a car makes a good "ground" plane for a UHF vertical antenna, even though the car is on rubber tires insulating the vehicle from the actual earth ground potential.

On the other hand, dirt is a terrible mirror surface, both for light and HF EM.

Because the radials act as ground, and they're better at it than actual ground.

Ground (as in: dirt) isn't a great conductor. A couple laid out good conductors hence work much better as ground plane than well-connected earth.

For RF, a good connection to ground potential isn't necessary – what's necessary is that there's a large plane that conducts.

What really matters is conductivity. Current doesn't just go in the ground rod and then it's done. It has to flow through the surrounding soil. 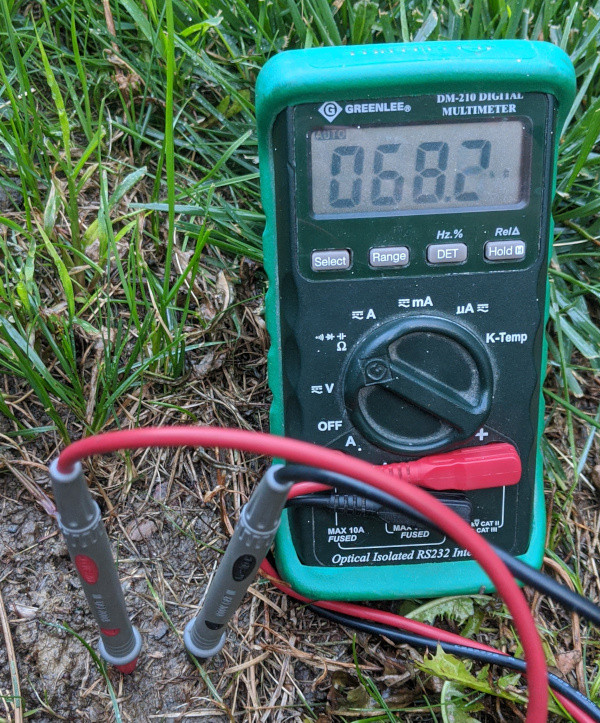 Now imagine how much lower this resistance would be with a copper wire between the meter probes.

Of course a ground rod has more contact area than my meter probes, and also what's relevant is not the DC resistance, but the resistance at RF. The multimeter probes stuck in the soil make an easy if not accurate demonstration, but just take my word for it: soil isn't nearly as good a conductor as copper.

In fact, soil is such a poor conductor that lightning would rather arc through 6 feet of air to get to a Beverage antenna than flow through the soil.

Not the answer you're looking for? Browse other questions tagged vertical-antenna grounding counterpoise or ask your own question.

0
Vertical Antennas: Compare Cushcraft R9, no radials to 43 foot vertical with ground radials
8
Why is an RF ground not as critical as the other, and can they be used backwards?
7
Using Earth as an RF ground
3
Counterpoise from artificial ground vs base of antenna
7
When and why does the size of a ground plane or radials matter?
3
How low can a vertical dipole be mounted?
5
Are Elevated Radials Necessary for Elevated, 5/8-wave “Ground-Plane” Antennas?
1
Counterpoise/ground/radial options for an Inverted L
1
Vertical Hustler - do I need any radials?
1
Does Improving Earth Conductivity Near a Buried Ground Rod Improve Antenna System Performance?