Is a 1/4 wave vertical actually better than inverted L on 160m?

Surprisingly, I am unable to find much info comparing these two antennas. Essentially, they are the same except the one is shorter and top loaded with one wire. Does anyone have any performance data available? The basics I know is that the 1/4 wave vertical will have a lower angle of radiation, but is there any difference in efficiency? Will the 1/4 wave actually have worse local performance than the L?

It would be a major expense and work to install, so I want to know the worth. Maybe even just personal anecdotal evidence.

In addition, I notice an interesting phenomenon. I currently have a 70ft inverted L. I compared to similar low power MW stations because they are 100% duty cycle, so I can see the effects more clearly. What is interesting is that my signal under good conditions, seems to reach a higher S level (listening through MW SDRs), but under bad conditions, it is worse than the MW station. So it has higher highs, but lower lows. I wonder what causes that? But either way, it leads me to believe that I won't have much better performance, just higher reliability. This is just one comparison however, so it could be in the noise :)

Below is the result of a NEC4.2 comparison of the radiation patterns & gains of the two configurations of radiators, with other things the same. 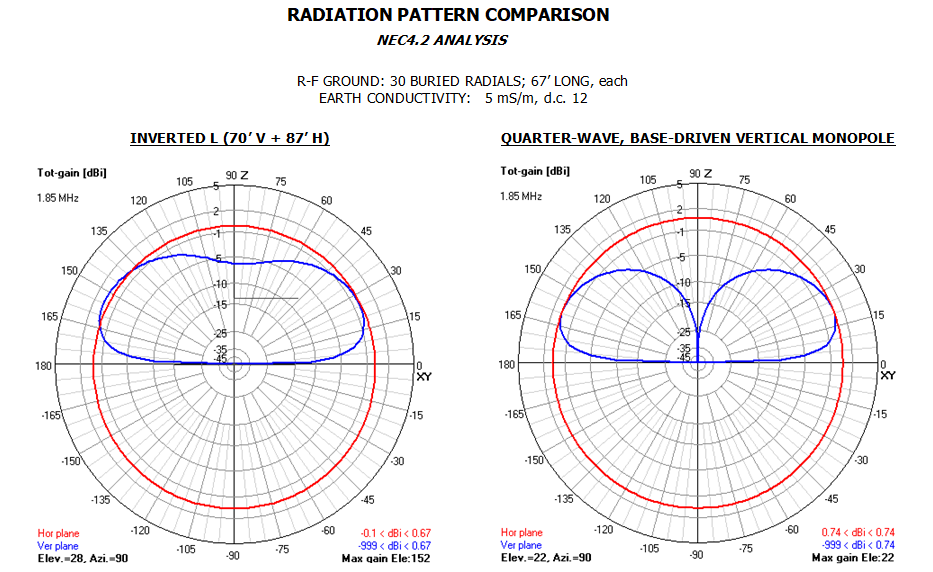 There should be some difference in efficiency, on the basis that the vertical portion of an inverted-L is "pure radiator", whereas the horizontal portion functions partially as a capacity hat (but not entirely — it also radiates). You can see this in the fact that an inverted-L has a lower feedpoint impedance than a quarter-wave built for the same band. However, the difference might not be much in your case.

The closest thing I can find to a direct treatment of your question is in W4RNL's Straightening out the inverted-L. On pages 15-18 of the PDF he considers an inverted-L for 80 meters of 69' total wire length (approximately a half-size version of your antenna) over modest radials and average ground. He doesn't discuss the quarter-wave vertical, but what he does do is look at three variants of the inverted-L: one with the vertical and horizontal segments both 34.5' ("balanced"), one with 23' vertical and 46' horizontal ("short"), and one with 46' vertical and 23' horizontal ("tall"). As expected there are differences in pattern, especially when the antenna is used on higher bands, but focusing just on the design band, he comes up with these numbers:

Which suggests that the efficiency effect is definitely there, but that the "balanced" configuration has already reached a point of diminishing returns. If two-thirds vertical is only 0.1dB better than one-half vertical, then all-vertical is probably only 0.1dB better than two-thirds vertical. The radials in Cebik's model are pretty marginal, so maybe an antenna over a better radial field would benefit more from the additional height — but if you don't already have great radials, then you might find more payoff there.

All that said, if you want to lower your pattern, then additional height will do that for you.

Not the answer you're looking for? Browse other questions tagged antenna vertical-antenna tower 160m-band .

3
2 antennas and 2 amplifiers connected to same exciter radio
2
Diamond X200A Lightning Protection
2
What to use to build a tower here in the Philippines?
2
Tweak antenna resonant frequency higher
2
Short low dipole, better if horizontal or vertical?
1
Yagi performing far worse than a dipole
1
Unable to tune 20m vertical with trio of Hustler resonators on top
4
How does the material of a fishing-pole mast affect antenna performance?
2
Why do ham radio operators say that a full wave dipole isn't resonant?