Looking at the diplexer schematic from this nice question, 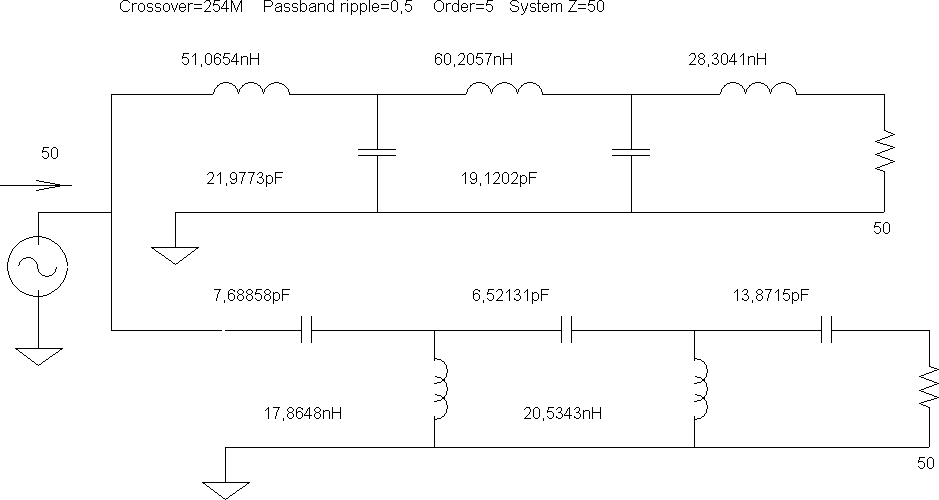 I realized this can completely be done in PCB-formed elements (minus the connectors). (As a kind of counter-action to the original question's intent to get leaded capacitors, I'm not only trying to eliminate the leads, but also the discrete components.)

Now, assuming I don't plan to work with as high power as the original question, but still substantial power (5W) in a relevant range of 20 MHz – 500 MHz:

Browse other questions tagged filter inductor or ask your own question.

5
How to prevent cracking the capacitors in my diplexer?

6
Choosing capacitor for high-pass filter with cutoff of about 160 MHz
5
What happens to the “Yo-Yo Tenna” when you coil up its ends for use on higher frequencies?
0
pull-up inductors for a differential PCB trace antenna
5
Small band-pass filter for HT?
5
How can the design of an RF filter also encompass impedance matching?
1
Raspberry Pi rpitx for SSB with filter?
2
voltage rating for RF filter components
5
Wide band TX capable band-pass filter for VHF and Airband
0
Combining two CFU455IT +/-2kHz (4kHz) ceramic filters to get a +/-1.25kHz (2.5kHz) filter for SSB
3
Looking for origins of a crystal filter schematic used in uBITX