I'm trying to make learning of the NATO alphabet interesting for kids. I invite them to spell car plate numbers during vacation with their parents. So both, the kids and the parents will learn the alphabet.

Personally, I think knowing the NATO alphabet is something you learn for your whole life, not just because it's required for the amateur radio license. It's also simple enough. Both my 10 and 7 year old children know it already.

I'm trying to find more examples where the NATO alphabet is used. So far I have:

I'm not sure about

I'm trying to make learning of the NATO alphabet interesting for kids.

I am a superfan of activity-based education. To help a Caribbean island nation prepare for its upcoming hurricane season, we staged Haminica 2016 in Roseau, Dominica for over 50 secondary school and university students, their teachers and security staff. We created formal emergency messages for two-student teams to pass to each other using HamSphere, the internet simulation of ham radio.

It was an eye-opening experience for all. Numerous issues, with clear analogs to "real world" emergency challenges, had to be solved on-the-fly to keep the event going. Plus, not only does HamSphere include simulated static (QRN) and signal fading (QSB), but stations from all over the world were constantly interrupting our stations to make contacts for award points. The interference (QRM) felt all too real!

The students found it extremely difficult to accurately pass the messages, but their efforts were saved by use of the NATO phonetic alphabet. With patience and determination, they gradually achieved their goals and the smiles of satisfaction proved glowing testimony to the sense of accomplishment they felt. 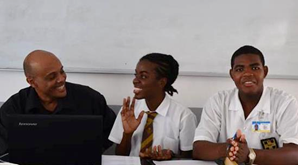 The students' struggles stood in stark contrast to the abilities of seasoned operators to pass similar messages much more quickly. As a result of this training exercise, more than a dozen participants obtained their amateur licenses and made tangible contributions to Dominica's stabilization and recovery from Hurricane Maria in 2017.

Without provoking anxiety or alarm, it's important for the kids to understand that we are all just one severe weather event or internet attack away from a communications emergency. Knowing how to use the NATO phonetic alphabet can make a life-or-death difference when it really counts.

Special thanks to OH2BH, Dominica's NTRC and the country's ham operators for making Haminica such a rousing success that Dominica plans annual repetitions.

As someone that had to take and make a number of customer support phone calls the NATO phonetic alphabet comes in handy. This avoids having to try to come up with something on the spot that would not confuse the person on the other end even more. Call centers for customer support will likely be trained to use the NATO phonetics as its unlikely to confuse or lead to someone being insulted over a poor choice of words. 911 dispatch centers would likely be trained on it as well.

The NATO phonetics are used for merchant marine communications, this is some kind of international standard or agreement. Railroads likely use it too. People that use CB, GMRS, or business band radios on trucks, busses, and such might not use this alphabet regularly but they'd know what it means if used with them.

This might come in handy for use over a PA. So, lots of places where the NATO phonetics would be useful.

I've used the NATO phonetic alphabet to do business by teleconference with six continents. All but one of the letters works well: I have problems with "Lima" whether I'm on the air, speaking to a foreign call center or doing business.

Suspecting that the "DX" were trained in "the Queen's English" rather than "American English," I began replacing my American pronunciation - "Leema" - with what I hoped was a more "English" pronunciation - "Loima". Sure enough, the error rate dropped precipitously.

This demonstrates a practical use for the NATO alphabet in cross-cultural education.

Not the answer you're looking for? Browse other questions tagged phonetic-alphabet children .

4
Is the NATO/ICAO or ITU figure pronunciation more common?