What would be a good modulation scheme for communicating a single bit of information with no more than 4ms of latency?

This question has been suggested in the comments to a closed question a couple of days ago. I have nothing to do with the original question, but this aspect of the problem made me quite curious, so it would be great if someone could make an attempt at answering it. The context of the question is long-distance transmission over HF.

No particular constraints on locations, equipment or power other than those following from amateur radio regulations (HF: mostly 400W maximum power), but more efficient (low-cost or low-power) and more reliable solutions are preferred. The time between start of transmission and finished decoding shall not exceed 4 ms.

Assume that no communication channel has yet been established, and no additional infrastructure is to be used besides a transmitter and a receiver.

Assume there's no need to decode the callsign

So, I'll go ahead and include the callsign, if we're sticking to regulation, in what needs to be decodable (though not necessary within the 4 ms). I'll also assume 4ms is from the point in time the signal starts reaching the receiver until it knows what was sent. Makes no sense to include the propagation delay: 4 ms is only 1200 km of distance at speed of light, and the original question was about 10000 km (and HF travels slower than vacuum speed of light).

WSPR reserves 28 bits for a callsign, and that seems about right, so I'll go with that.

Together with a 1 bit payload, that makes 29 bit.

What matters at the receiver is that we make the right decision about having detected a 0 or a 1. That's an data estimation from a noisy observation, and that's pretty simple to model: We receive something, quantify it as a number, and mark somewhere that "left of this mark, it's a 0, right of this mark, it's a 1". All we have to find is a sensible method of mapping our received signal to a number, then find the optimal place to set that decision boundary.

Now, we have to deal with noisy reception. That means that the receiver can never be actually sure what was sent, because the received signal is added to noise.

We can put a number on how likely it is that it was wrong, a bit error probability, however, on a system, as soon as we understand how the noise amplitudes compare to the signal amplitudes.

Say, this is your noise probability density function (PDF). Noise is a bit unnerving, because it's not a deterministic thing: Noise is by definition random. We can't know what its value is, and we thus can't simply subtract it from what we've observed. But we can describe that random variable by its pdf:

Let's do an example; imagine this: you know that your transmitter sends a positive +1 to signal a "0" bit, and a negative -1 to signal a "1" bit.

You observe a negative value -0.45. What was sent?

Both happens in reality. So, we can't be sure. What that looks like in the terms of the above plot is that if we know that a +amplitude reached us, we know that the value of signal + noise amplitude has the same pdf as noise, but with the horizontal 0 point shifted right to +amplitude, so that the "bell" now is centered around the actual received signal.
The same happens when -amplitude reaches us, but in that case, the noise pdf bell curve is shifted to the left: 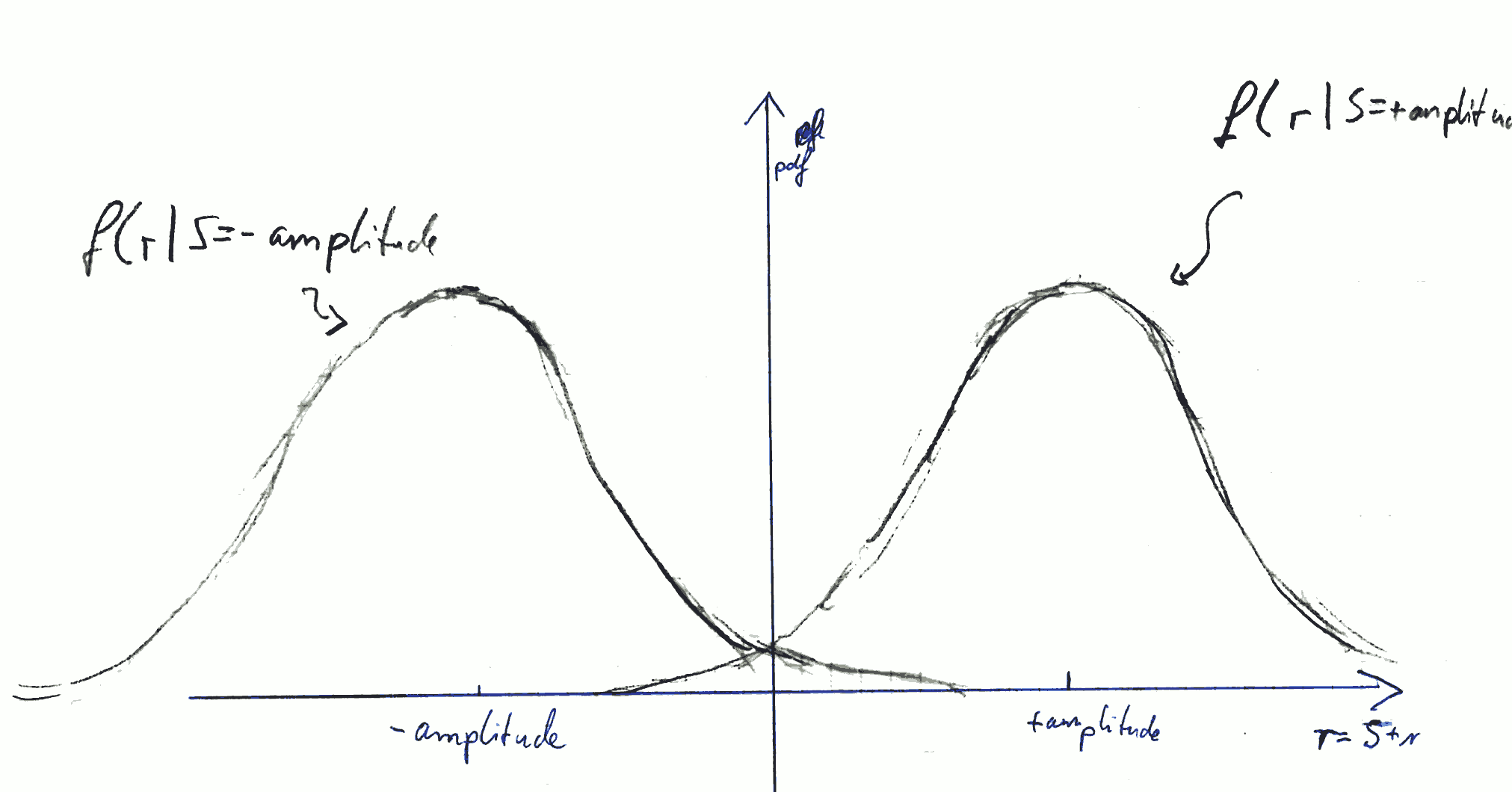 We never see that bell, it's just a hidden property of the random variable "receiver output", but that allows us to reason about things:

Of course, we want to make a decision that makes most sense. In our example, that means we'll assume that +amplitude was sent when we observe an $r$ right of the vertical axis, and -amplitude when we observe an $r$ left of the vertical axis. But note that this is only true if we assume both to be equally likely, and if our PDF is symmetrical! (this is the Maximum-Likelihood estimator, by the way.)

This lets us reason what influences the probability that we make an error. It's two things:

What this shows us is that to design a system for a given error probability (99%, in your case), we need to think about the ratio of power in the received signal, and power of the received noise.

Let's say we have an attenuation $a$ over the channel (in fact, $a$ will very much depend on the time of day, sun activity, weather, mood of your cat, …, so we'll have a probability distribution for a random variable $a$, and we need to pick $a$ such that it's at least as good as that 99% of times).

The receiver has a noise floor density $N_0$, a noise power per bandwidth. Now, bandwidth is an inverse of time, so that the physical entity $N_0$ is indeed power times duration, i.e. has the same physical meaning as the bit energy.

So, doesn't really matter how much bits per second we send; the $E_b/N_0$ value is defined by the transmit power and the unit-bandwidth noise variance.

Also, receivers aren't perfect. So, we can add 2 to 4 dB of noise figure to that, which is roughly a factor of 2.

So, sadly, it's not for us to choose 1., the noise variance, in what determines the probability of error.

That leaves us with choosing 2, the power of the received value.

Armed with a table for the integrals of the bell curve we've shown above, we can look up the $E_b/N_0$ value that we need for a given maximum error probability.

This table can be put into a plot: The BER curve. If we receive +1/-1, we call that BPSK, and the BER curve looks like this: 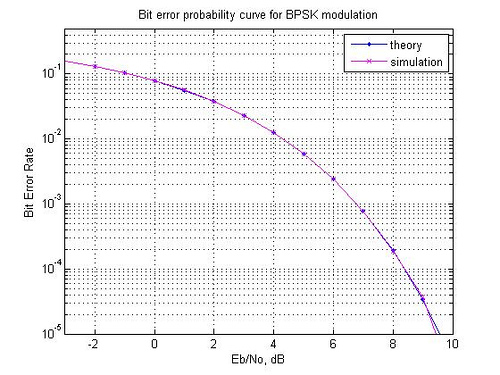 We can transmit 1.6 J of energy legally for that single bit. As long as far-range transmission doesn't impose more than about 196 dB of attenuation, we're fine.

I don't know current channel conditions on say the 40 m band. I really don't. If someone has a current table that says "with a probability of x, we see such and such an attenuation", I could tell you what is OK to assume in your 99% of cases. (By the way, that would again take the form of a PDF, not of noise as random variable, but as the channel attenuation as random variable.)

What I do know is that we don't know the channel beforehand. That means we don't know the phase that the channel imposes on us (which simply depends on the exact length, and medium effects, reflections and so on). Since that includes 180° phase shifts, we can't just transmit a single +1 or -1 with a high power, because the receiver simply couldn't tell the sign.

Also, we're far from the only people to use that band. So, just sending a tone will not work out – other do the same, and suddenly our noise isn't only the receiver noise, but also the interference from others.

So, what we need to do is to give our signal

The standard way of doing that is spreading the signal. So, you use a spreading sequence. Say, $+1, -1, +1, -1$. You multiply what you want to send, let's say the $+1$, with each element of that sequence. You then send the result, but with only 1/(length of sequence) of time per resulting number, so that you still send the same amount of "payload" bits per time.

Sadly, you mustn't forget that in order to convert that single bit into four bits and transmit them, you had to use only one quarter of the original energy for each transmitted bit. But, since you added up signal, which was always the same, your signal gain is quadratic, whereas your noise gain only linear to sequence length. You generally gain SNR as a function of the length of the sequence.

A big bonus of using a sequence is also that you can use a unique one. Which means that if you correlate with some signal that wasn't shaped with the same or a similar sequence, it, just like noise, doesn't add up constructively. So, you can "isolate" your receiver from interferers. Neat!

Now, it seems intuitive that you'd want to spread as much as possible. Make your sequence a million elements long. Be totally unimpressed by any interferer.

Sadly, you need to send more symbols the longer your sequence get. Where we had 1 bit that took 4 ms to begin with, equivalent to 250 bits per second, we'd need to transmit 250 million bits per second. Since we can't transmit more than 1 symbol/s/Hz, that would require us to use a bandwidth of at least 250 MHz (assuming binary symbols). You can't get that bandwidth around 7 MHz...

Another problem with bandwidth: you'd also need to make sure that if your signal finds more than one path to your receiver, the "later" copy of the symbol doesn't disturb the next symbol. (We call that inter-symbol-interference, ISI.)

There's three ways of managing that:

The first option is not an option. This system won't work without identifiability.

The second option requires a separate decision of what was sent on many channels, and requires that you really send enough data to even fill all the subchannels. Also, we can't really do many subchannels: our frequency resolution is 1/duration, duration is limited to 4 ms, so our channel spacing is 250 Hz, at least. We have at most 2700 Hz of overall bandwidth in the 40 m band, so that's at most 10 channels (there's some non-negligible overhead for such methods). 10 is not "many" subchannels. (Really useful would be 128 to 4096 or something like that).

The third option sounds best, but it requires that you estimate the channel impulse response, so that it can be reverted by the equalizer.
Now comes why it's bad to not consider the callsign alongside with the 1 bit of info:

If we need to send 29 bits in total, sending 1 bit of known preamble to allow the receiving end to identify the properties of the channel doesn't hurt much – it's less than 4% of the energy we would have invested to send the over the whole shabang. If we only send 1 bit, then that 1 bit of preamble means 50% of energy lost to channel estimation. Ouch.

Also, remember the BER above? Yeah, that's not optimal. If your $E_b/N_0$ isn't outright terrible (which we can avoid, with but a bit of spreading), and you transmit enough bits (1 doesn't allow for much) we can apply channel coding with an forward error-correcting code (FEC) to make that line better, i.e. needing less bit energy for the same amount of data. That "blows up" the amount of data you need to transmit by a factor of $1/R>1$. The good thing about error-correcting codes is that they are even more efficient than spreading at converting more bandwidth into better $E_b/N_0$, but they can't help you much with telling your signal from noise or other people's signals.

So, all in all, your transmitter would likely look like this:

Notize how the FT-8 bandwidth is 50 Hz, and thus pretty close to that 84 Hz? Makes a lot of sense, FT-8 is meant to be nice for many people playing together at the same time, and doesn't have a (hard to ridiculous) 4 ms constraint.

Not the answer you're looking for? Browse other questions tagged hf modes or ask your own question.