In a paper cited in comments to this answer to In the 1950's how were radio-astrometric positions with portable dishes so precise they could be assigned to their dim optical counterparts (Quasars)?

The 1963 paper is Accurate Measurement of the Declinations of Radio Sources (click the little PDF icon) and the two excerpts containing the phrase "crystal mixer" are quoted below along with the block diagram.

When I hear "crystal" I think of either quartz crystals for oscillators, or metal crystals (e.g. galena) with oxide surfaces used to make diodes using cat's whisker contacts, but for diode detection in the mixer certainly both vacuum tube and solid state semiconductor diodes existed in the 1960's, though I don't know about the performance at 960 MHz.

Block diagram of an astronomical interferometer made from two radio telescopes separated by 200, 400 or 1600 feet and operated at 960 MHz. The mixers in question are shown just below each dish: 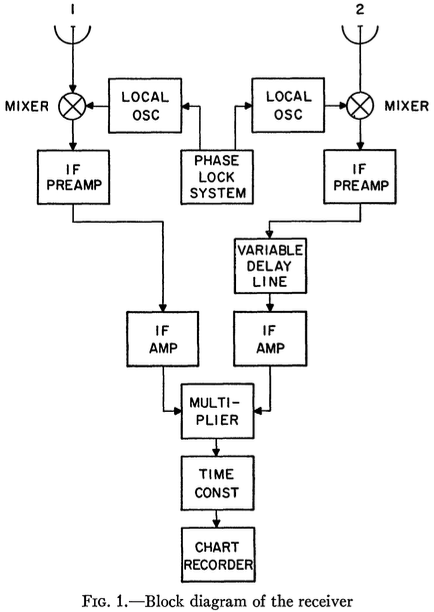 "Crystal mixer" appears twice in the paper; on page 2:

The arrangement of the components of the receiving equipment is shown by the block diagram of Figure 1. The receivers were of the superheterodyne type, and the crystal mixers were connected by short lengths of cable to the antenna feeds without any pre- amplification at the signal frequency. The local oscillator frequency was 960 Mc/s, and the center frequency of the IF amplifiers was 10 Mc/s, with a band width of about 4 Mc/s. No attempt was made to reject the image response of the superheterodyne. Note that the IF amplifiers were split into two sections. The IF preamplifier was located at the prime focus of the paraboloid along with the mixer and amplified the signal sufficiently to allow it to be fed through a long connecting cable to the remainder of the receiver, which was located in the laboratory building.

and again on page 3:

No attempt was made to reject the image response of the superheterodyne.

This suggests that the designers wanted nothing to phase-shift RF signals...important in an interferometer - everything between antenna feed and the 10 MHz I.F. amplifier would be quite broad-band. And gain (actually loss) of diode mixers is fairly well-controlled.
Keeping those two RF paths identical was likely an important design goal. Perhaps their signal source was a strong one so that receiver sensitivity was not a limiting factor.

Have a 1960-era VHF mobile phone that used a single point-contact germanium diode mixer very much like this, very first stage of the receiver. However, tuned circuits were placed between antenna and mixer to reject the image response. Many TV tuners of that era used a similar approach.
Diode mixers work nicely at very high frequency - generating the local oscillator power to drive them is the bigger problem.

Not the answer you're looking for? Browse other questions tagged history mixer .

4
What advantages does dual-conversion have over single-conversion superheterodyne?
5
In the context of the mixer in my radio, what does balanced and unbalanced mean?
8
What exactly is a "balanced modulator"?
7
DIY SA612 + RTL-SDR HF receiver: good on laptop, but huge wideband noise on Raspberry Pi
7
What exactly was a decremeter and how did they work?
6
How can quadrature mixing adjust the phase of all frequencies by the same amount? Can it be done in the digital domain?
2
Explanation of VFO as one part of the the tuning variables in mixers