Important note: After consulting another source, I learned that the article calls for the first pair of opposing dipoles to be fed in phase, with the second pair fed in quadrature to the first pair (but in phase with each other). Sadly, the results are the same, so I still don't know what's wrong with the model.

An earlier question asked about the tuning of the four dipoles that comprise the "Double Cross" antenna, intended for hemispherical reception of satellite signals: 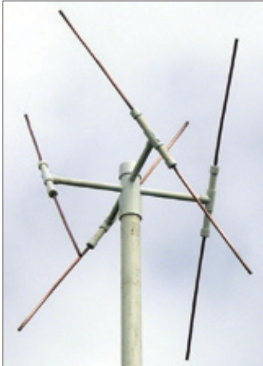 While attempting to respond to the question, I found that I was unable to reproduce the free-space radiation pattern claimed in the article: 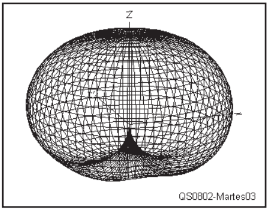 Using the dimensions specified in the article for 435-MHz: 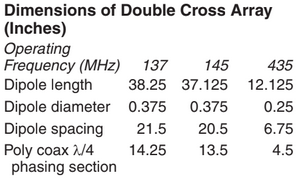 I constructed a free-space NEC-2 model with increases in source phase of $90^o$ proceeding around the circle of elements. I obtained these results with the elements tilted $45^o$ from the vertical:

The "lightbulb" shaped pattern is clearly not what the author intended, although the impedance at the feedpoint of each dipole seems to approach the author's goal, re:

The input impedance of each of the λ/2 dipoles when configured as shown will be very close to 50 Ω. Each pair is wired in series to have an impedance of 100 Ω. After connecting the two pairs in parallel, as shown in the harness diagram of Figure 9, we end up with the desired 50 Ω for the run to the radio.

Tilting the elements more toward the vertical reduces the "lightbulb" shape of the pattern, but approximately halves each dipole's feedpoint impedance:

Can anyone clue me in to what I have done wrong in the model?

From the Answer of Marcus Müller: I simulated the Lindenblad 2m antenna (which should scale, right?) that came with the xnec2c examples. ...

The unedited *.nec file included in Marcus' answer was downloaded into 4nec2 and analyzed using the NEC4.2 Engine — which produced the graphic shown below. Two items of interest appeared...

(1) The az/el radiation patterns are ~perfectly circular, but h-pol gain in the horizontal plane is about 5 dB less than v-pol gain. This means that the axial ratio of its net radiation pattern is not unity.

(2) The calculated feedpoint terminal impedance (outlined in red) does not provide a good match to a 50 Ω source connected to it.

Some refinement of the geometry of this design might be worth pursuing before such a wire model is actually constructed. 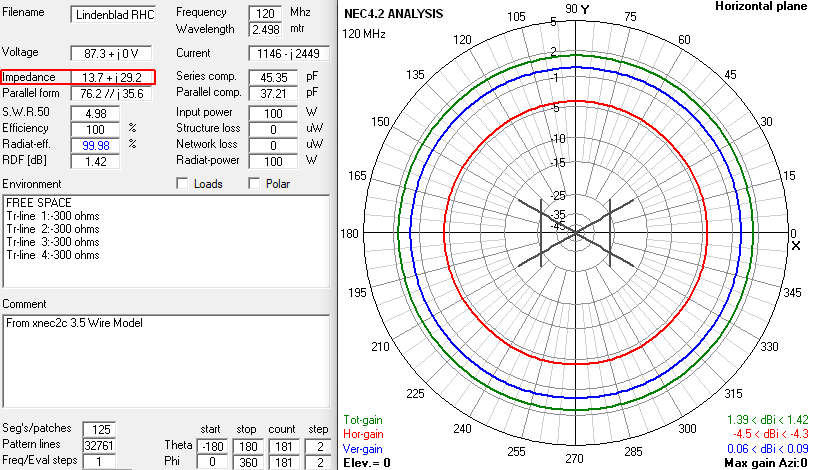 This is as close to an answer as I'll be able to give:

I simulated the Lindenblad 2m antenna (which should scale, right?) that came with the xnec2c examples.

In conclusion: yeah, in my simulation, things are symmetrical, as promised for the 30° slant.

So, Martes' design seems to stand out pretty singularly, and simulation can't seem to reproduce it: Hm. Maybe it's plain wrong, maybe the description doesn't really match what he did, maybe we're too stupid to do it right. Hm.

4
DAB antenna in roof space
5
How to model passive elements when simulating an antenna?
1
Can I measure position with antenna/receiver?
2
Beamwidth of omni-directional antenna with gain
5
Why is my calculation for added length of coax for a double cross antenna different to everyone else's?
5
Modelling a folded dipole
0
Variable polarization Yagi using two antennas on the same boom, joined together with variable feedpoint phase?
3
Confusion about dipole standing waves and feed point impedance
0
Why is a half wave dipole resonant?