See the unconventional antenna shown below, The whole antenna is made of two mirror-imaged Alum metal stampings on either side of a 2-cm hollow 31-cm long rectangular plastic boom. The antenna top and bottom Alum stampings make up one active element. With it I am barely able to receive some TV channels that are about 25-40 km away(depending on weather). It is just shy of what I need to receive several channels up to 40Km away. regardless of weather.

I want to completely strip the useless much larger yagi-hybrid antenna (shown below the LDPA) to salvage only the dipole and the main boom. Then I want to improve/kinda clone the smaller antenna on the big boom to get better performance than I have now only limiting bandwidth to 500-670 mHz of the Dig T2 spectrum.

I see a possible big problem in making the new antenna in that he smaller lPDA design antenna has a plastic boom and the big antenna boom is made of hollow rect. alum. How can I improve/clone the unconventional antenna to get it to work even better?
**

The FDLA antenna is an unusually fabricated antenna designed for the Terrestial Digital TV band. Its two-piece construction design does not fit any conventional antenna geometry. It was initially made for indoor use but I have mounted it outside and 75-ohm coax from the antenna's front position of elements is feeding a 18 dB wideband VHF/UHF preamp through a 4:1 balun with no LTE filter, with the preamp output then feeding 75-ohm coax down to the a TV though a power power supply feed point box. 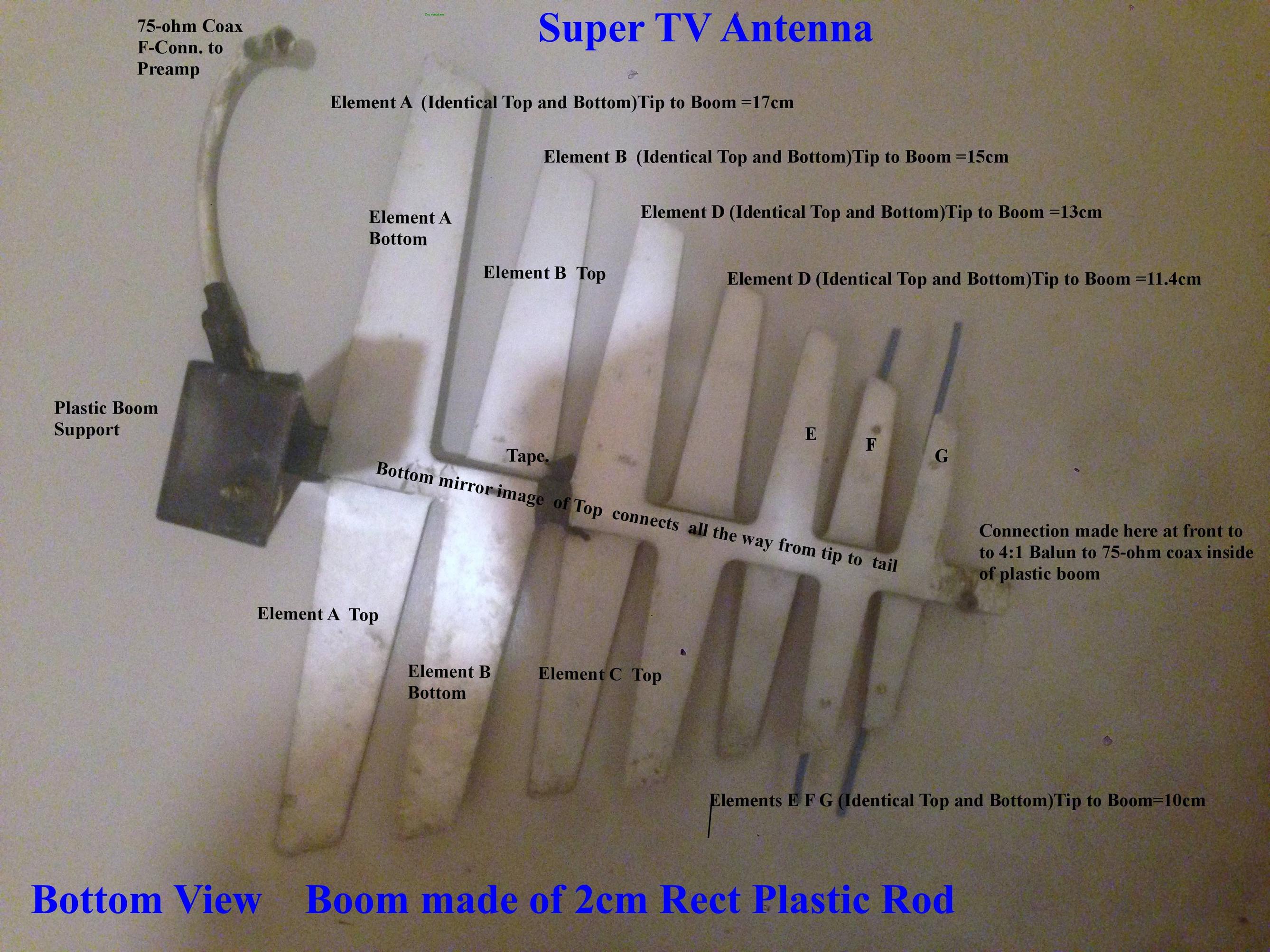 This antenna is so much smaller, works so much better (was able to receive stations >25 Km versus 5 km) than the commercially made antenna shown below it:

Below: **poor performing yagi. This yagi-hybrid antenna was on fire sale to get rid of remaining stock and priced at 1/10th the usual retail price, likely because it was so often sold and returned because it didn't work well.* **

5-Ft boom, kinda 3-stacked angle Yagi antenna with 2-Ft reflectors and angled booms of 8 directors each with each boom end nearest the dipole expanding up/level to boom/down to stack together to at a 25-degree to the center main boom. Each of the 8 evenly-spaced (len=13cm) director elements has a half-wave wavelength >1000Mhz. The dipole active element is two separate closed loops on either side of the boom, the resulting modified 1/2-wave dipole(approx ~400mHz half-wave) make up the single dipole that is the only active element. See Image: 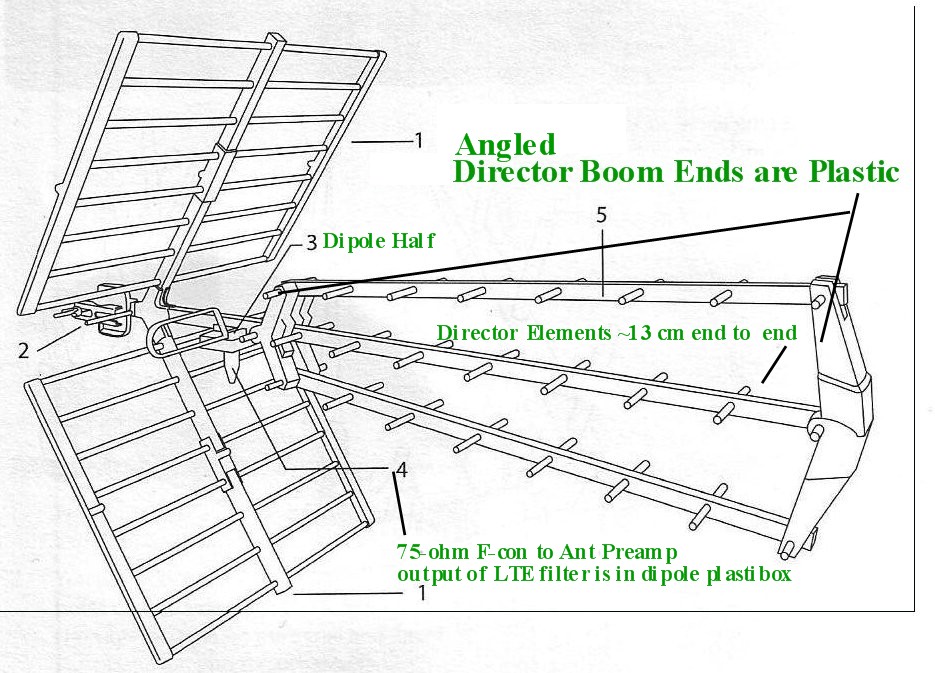 The split dipole is two closed loops with the bottom of the loop split to opposite sides of the main boom and feed the LTE filter (A PCB 2-cm sq. which has two holes for screws connecting the two split dipoles, these connections are approx 2-cm spread apart) and long threaded screws connect each of the dipole halves to the LTE filter PCB mounted inside a plastic box that itself is clamped to the 5-ft boom.

The dipole is positioned about 1/4 wavelength(@500mHz) from the reflectors and 4.5 cm behind the triple array of 8 identical directors on three booms, folded together and placed about 4.5cm forward from the dipole active element.

This large antenna works very poorly(with/without) the same preamp, barely better than a single folded-loop dipole(550mHz 1/2 wave)soldered directly to the ends of a 75-ohm coax cable going to the same preamp to the TV receiver.

So, instead I'll concentrate on the general radio and antenna engineering aspects of this.

This antenna is made of two stamped aluminum sheets with top and bottom mirror imaged. What type of antenna is this

Wow, that looks like a logarithmic-periodic antenna, which is an antenna design meant for high bandwidths, meaning that the difference between the lowest frequency it works OK and the highest frequency is relatively large compared to the center frequencies.

However, the logpers I know are typically made of much thinner elements. This is a pretty interesting design that looks like it takes into account other design aspects like H-plane beam width...

In general, "what type of antenna is this?" questions are often not uniquely answerable in the world of commercial antennas: Every antenna is the result of an optimization for way more things than the "classical antenna types" things account for. In this very case, I'd like to point out how much this antenna design might also be the result of optimization for mechanical stability and erosion resistance. A lot of antennas for the end-consumer market are also highly optimized for looks, since it doesn't matter how great your antenna is if nobody buys it.

and why does it outperform a large 3-boom kinda Yagi so well?

Probably because your Yagi is very good! When you, for example, optimize an antenna for high directionality, i.e. it can pick up a signal coming from a specific direction very well, that means it picks up from other directions worse – there's no free lunch.

So, when you now "roughly" point both antennas at the transmitter, but are off by a couple degrees in horizontal and/or vertical direction, then the "worse" antenna in terms of antenna gain suddenly picks up more signal, exactly because the "better" antenna was designed to pick up little power from any direction but the main beam.

What impedance is the split dipole on the crappy antenna?

Probably something in the 75Ω region. But really, receiver antenna matching is far less important than people think. Before worrying about that, make a worst-case mismatch estimate, then calculate the mismatch loss you're getting, and ask yourself whether these usually-less-than-6 dB actually make the amount of quality of service difference (and what distance variation in free space path loss would be equivalent to the same amount of lost signal).

Why are all the directors of the crap big antenna cut the same and spaced the same and all with a 1/2 wavelength of approx. 1000 MHz

Can we stop calling that antenna "crap"? This looks like a very sophisticated design, and multiple engineers worked hard to design that antenna. Chances are the antenna, cabling, active components or anything else are broken, it's meant for a different band than you're using, you're using it in the wrong polarization (in Germany, for example, digital TV has orthogonal polarization to analog TV) or you're just not pointing it exactly enough, as this definitely looks like a high-gain design, considering the size.

The directors on the main boom might be mounted in the same distance, but they don't exist in isolation – the reflector is angled relative to them, so that the phase centers of passive dipole + reflector are most definitely not uniformly spaced; and the upper and lower boom is there to give rise to phase shifts, too, and you will only make sense of this antenna if you look at all these in combination; so, this is a pretty complex antenna and it's certainly not easy to design. A lot of simulations, prototype testing, optimization for reliable manufacturability.

11
What is a Gamma match in the context of the driven element of a Yagi antenna?
2
CB Radio Ground Plane (or lack thereof)
0
If one were to add reflector elements above and below a dipole would it change the direction to horizontal?
1
If the voltage at the center of a half wave dipole isn't zero, then how do Plumber's Delight yagi antennas work?
5
How to model passive elements when simulating an antenna?
1
2m 5-element yagi with staggered driven elements
2
Yagi: split or solid driven element?
5
Can half of a directional antenna (Yagi-Uda, HB9CV) be replaced by a ground plane?
3
Dual Polarization Yagi Antenna for 10 m
0
Dual driven-element Yagi-Uda antennas