I plan to put up a "fan inverted vee" but for various reasons I will not be able to take it down, adjust wire lengths, put it up, test, etc: I will basically have to cut the wires, put it up and leave it up there. So given I sort of have one shot, I want to get the most accurate estimate by doing some modelling of my actual geometry, which I am able to do in the excellent EZNEC package. I note that I do have an antenna tuner (MFJ Intellituner).

But here is the problem: when I create such an antenna with the inverted vees from different bands physically far apart, I get a good result (low SWR in desired part of band), but when I create something that looks a lot more like the fan dipole/vee antennas you see described in numerous places, I see the shorter wavelength antenna having a swr like 10+. I expect this is the wrong answer.

It may be that I have done something wrong in creating the model in EZNEC. I took the two band case (40m/20m) and created the basic antenna by using a short (one foot) central wire on which I place the source. Then I have 40m and 20m wires coming out from the ends of the one foot section.

When the 40m section is a dipole (straight line) and the 20m section drops 35 degrees from each end, the swr looks very good for both bands (well under 2:1 in the desired band segments). But if I then drop the 40m wires by 30 degrees on each side (so they are close-ish to the 20m wires), the 40m swr looks fine but the 20m swr is in between 10 and infinity in the region of interest.

Being a beginner with EZNEC, I suspect it is me doing something wrong! Below I attach from EZNEC 1) the dipole configuration 2) the source set-up 3) the "fan inverted V" configuration and a diagram showing the antenna.

I note that I am using the "demo" version with a maximum of 20 elements. Might this be why the antenna seems to not "work" in EZNEC? 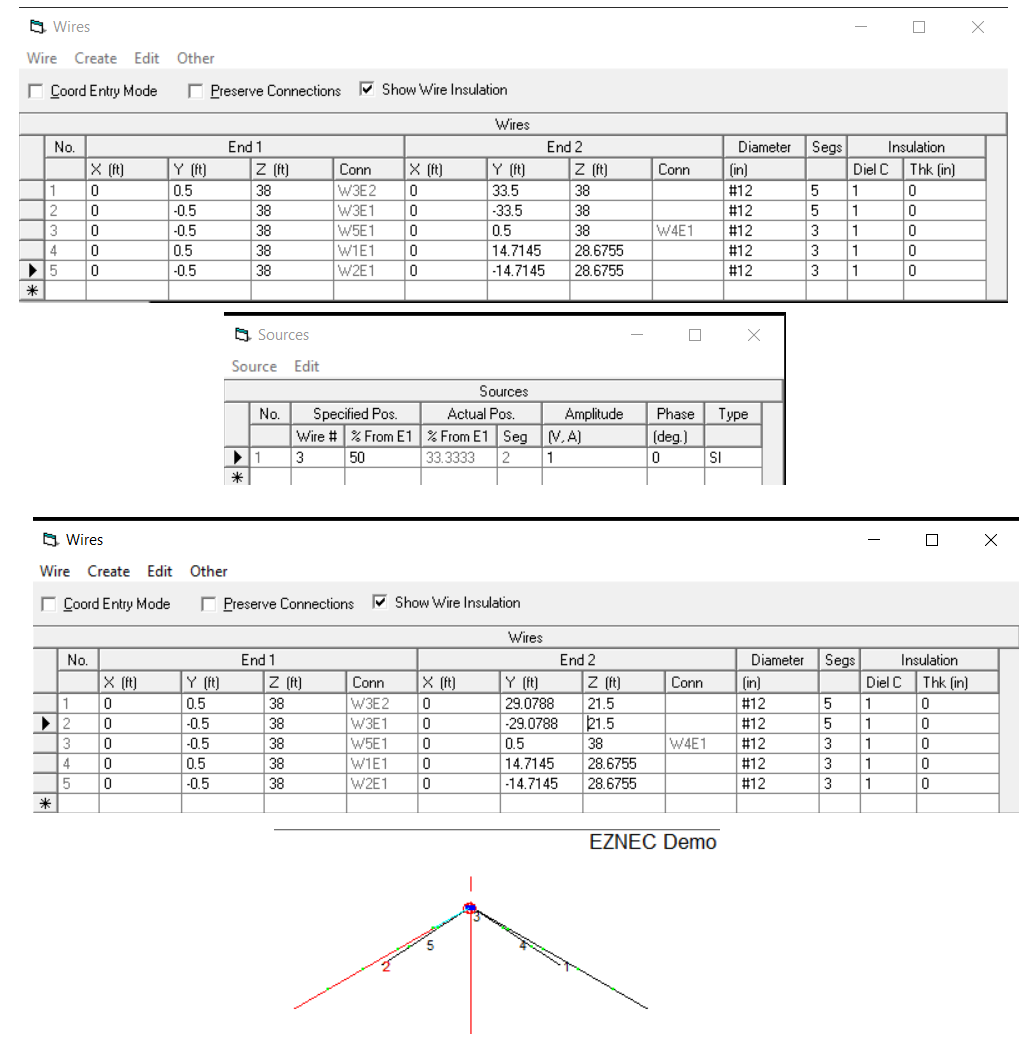 Yes, being limited to 20 total segments for two dipoles is likely to be a problem, especially because of your hope / plan / expectation to have the model accurately predict what is built. I created an EZNEC model of a fan dipole for 40 and 20 meters; even the minimum segmentation - which, don't forget, must suffice at the highest operating frequency - required 21 total segments, which produced a somewhat different SWR curve than was obtained with more segments.

Feedpoint geometry, as mentioned by another poster, is critical when simulating a design where two pairs of wires are meant to meet at a single set of terminals. I modeled the antenna thus:

with this geometry at the feedpoint:

All segments are 1-ft long, for a total of 51 segments.

The resulting SWR curve, over medium-conductivity "Real" ground, is well behaved, with resonances at 7.1-MHz and 14.175-MHz: 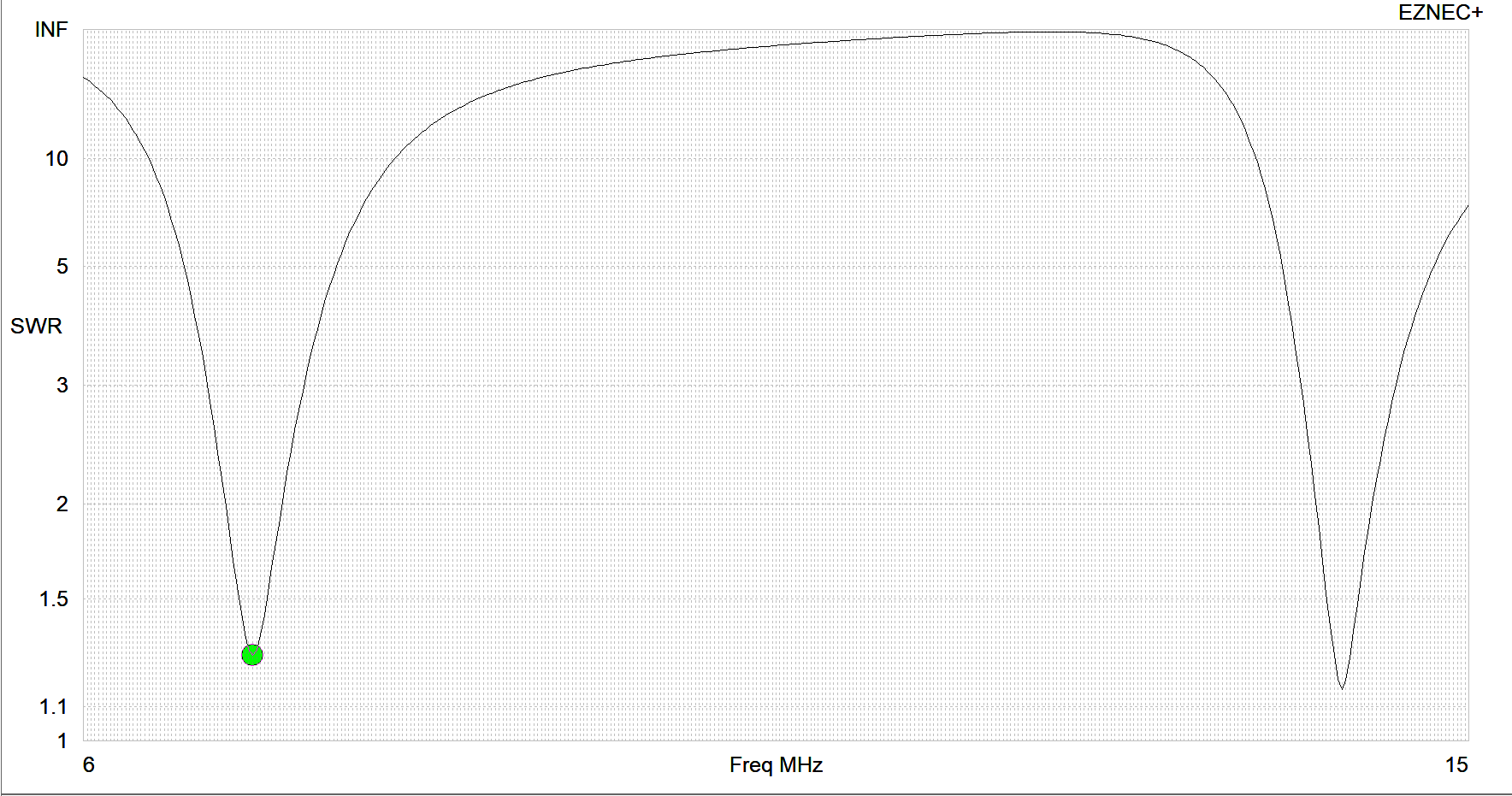 For your reference, here are the wire descriptions:

I doubt that the segment limits of the program is your main problem. You should get accurate enough details in spite of that.

Part of the problem is at the feedpoint. You need to build your fan dipole so that there are insulating spreaders* to keep the wires for the different bands parallel and farther apart from each other for most of their length. As it is, the wires are too close together for most of their length, and thus they are interacting with each other too much.

Here's an easy solution: Add some short, steeply angled wires on each side --between the feedpoint insulator and the existing wires-- to get them away from each other. (Commercial multiband fan dipoles do this.) After that, you can adjust the length of each dipole to compensate for their interaction with each other. 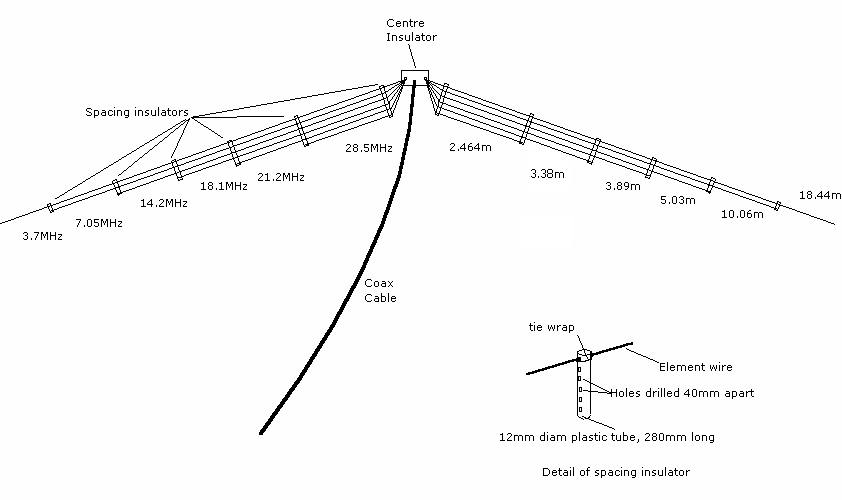 This design has a spreader as the center insulator: 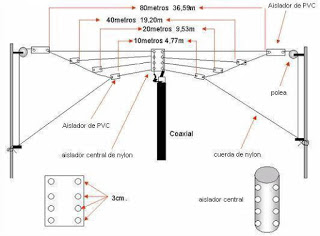 *The spreaders could be rigid strips of plastic with holes drilled every 6 inches, and one should be as close to the feedpoint as practical.

The alternative would be to not worry about being parallel with each other, and greatly increase the angle between them. One example of this might be to have two dipoles 90° to each other, or three dipoles 60° apart. It's often better not to do it this way due to the directional pattern of dipoles, but that's another story.

(I once asked about the same thing here, but I can't find the question.)

The wires are too close.

Not the answer you're looking for? Browse other questions tagged hf wire-antenna antenna-modeling parallel-dipole or ask your own question.

9
What is the largest gauge (thinnest diametre) wire I may use as an antenna?
5
HF Noise Level S5 to S9+18
1
Raising height of inverted V by 2 meters
4
3 Band (80-40-20 Meter) Fan Dipole Tuning Question
3
Fan dipole with loading coil(s)?
5
EFHW works only on one band - what am I missing?
4
Basic antenna matching theory?
1
Modeling a multiband Yagi in 4NEC2?
6
Antenna options
1
Common-mode choke (CMC) hurting my SWR. Live with it? Drop the choke?