I would like to know whether increasing the size of the antenna help increase its gain. Does this hold only for certain kinds of antennas like parabolic or horn antennas? And if it is true, can you please provide a solid paper reference?

Gain and size are correlated, but not rigorously.

For example, a Beverage antenna is larger than a half-wavelength dipole, but has lower gain. The Beverage does however have higher directivity.

Another example, a Hertzian dipole is a theoretical antenna that's infinitesimal, and yet has only very slightly less gain than a half-wave dipole. It's efficiency however is a different story: as a dipole gets smaller its impedance becomes more reactive, thus necessitating a matching network that must deal with more reactive power and associated loss.

Extending a dipole beyond a half-wavelength does increase gain, but not usually in a very useful way: the pattern grows a bunch of lobes pointing in weird directions. For most antennas we want orderly lobes pointing in useful directions, maybe one specific direction or maybe we want to direct radiation at the horizon but not so much up or down.

These are examples that are contrary to the typical correlation. A final example that is more typical is a phased array, like a Yagi. Adding more elements to a Yagi increases the gain, and the Yagi is usually designed so all the gain goes towards a large forward lobe with minimum gain in any other direction.

It is however important that the elements are correctly positioned and phased. Adding more elements to an array and incorrectly phasing them can result in an array that's no better than, or perhaps worse than a single element.

It's worth considering two points:

TANSTAAFL. There is no such thing as a free lunch. Signals aren't multiplied by antennas, the only devices capable of adding "gain" are amplifiers.

In the antenna world, "gain" means "directivity". If an antenna has a lot of "gain" it means the pattern of the antenna makes it radiate towards one direction more than others.

The best analogy I found for an antenna is: consider a half inflated balloon. It's round (ish). Now squeeze it with your hand. Depending on how you squeeze it, you will create lobes: all forwards, forward and backwards, etc. The power coming out of your radio is the air inside the balloon. Your hand didn't add any more air, but directed it towards a preferred direction. Thats what an antenna does.

And a finer resolution allows a higher gain in some targeted direction (where the imager's focus is aimed), as well as a reduction in sensitivity to some portion of off-axis noise.

For parabolic reflectors the larger the reflector the higher the gain (assuming the feed is illuminating the entire reflector). Here is a nomogram from "Reference Data for Radio Engineers". You draw a line from the frequency to the diameter and the middle column gives you the gain. As diameter goes up, so does the gain. 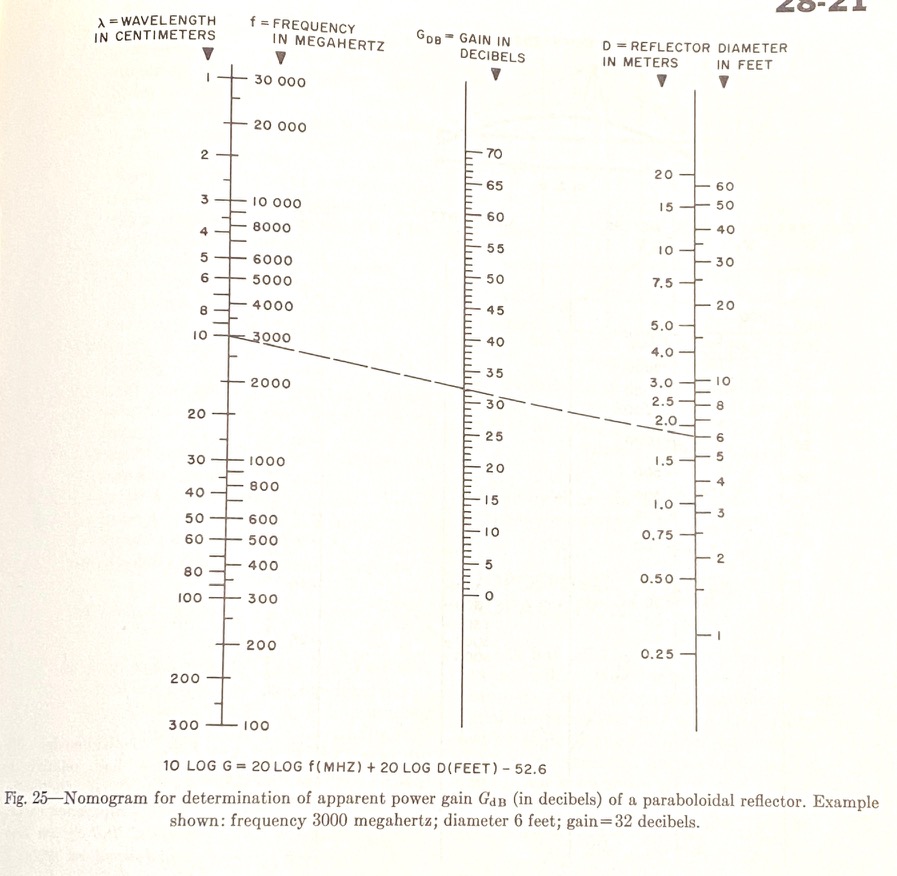 8
Can you use a satellite dish for a ham radio antenna?

7
How does Wi-Fi antenna work?
1
Relation between beamwidth and operating frequency
2
Could 8' Marine whip antennas operate on much higher frequencies?
3
Gain difference between half-wave and infinitesimal dipole?
1
Would an infintely thin horitzontal yagi with zero height respond to vertical signals?
8
Estimating the efficiency of a shortened (loaded) antenna
3
Connecting Directional Antenna To Two Antenna Ports on NIC
0
Radio Waves propagation (Intuitive Understanding of Wave propagation)
3
Is a resonant antenna inherently more efficient because it couples to free space more efficiently?
3
How do VHF antennas compensate for change in frequency in Frequency Modulation?