How to make an RF probe for accurate power measurement at QRP power levels?

Typical SWR meters don't measure forward power very accurately at the lower end of the scale, which can be a real problem at QRP power levels. Better power meters like the Bird model 43 are expensive, and the calibration of used models can be very uncertain. However, I've heard that an RF probe, a dummy load, and a multimeter can be used to make a power meter. I've also heard that such a power meter can be more accurate, if an oscilloscope is available for calibration.

How can one make an RF probe, and how does one use an RF probe for accurate power measurement?

Ideally the diode has a low voltage drop, like a Schottky diode. But any ordinary silicon diode will work in a pinch.

The capacitor and resistor values aren't really critical as long as the time constant (the resistance times the capacitance) is much greater than the period between cycles. Something like 1nF and 10kΩ would be fine. I usually use whatever I have laying on the bench.

To use, set up your transmitter to dump power in a dummy load or whatever, and then place this probe in parallel. VM1 can be an ordinary digital multimeter because this voltage changes only as fast as the RF output power, which for an unmodulated carrier, will be DC.

It's important that the leads on everything left of C1 are kept short. Otherwise the added inductance of the long leads will introduce significant errors in the measurement. This becomes more critical with increasing frequency.

To convert the measured voltage to power:

Assuming a 50Ω load impedance, the calculation is:

For low power levels where the forward voltage drop of D1 represents a significant fraction of the output voltage of the transmitter, accurately characterizing that voltage drop is critical for accuracy.

The simplest method for determining the voltage drop is to read it from the data sheet, but behavior at RF may not be accurately characterized.

A more sophisticated approach could bias the diode to compensate for the forward voltage drop: 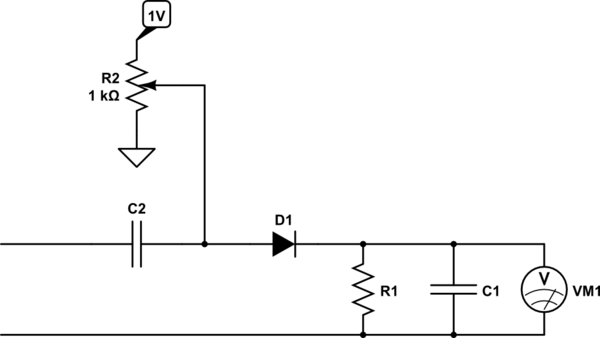 To use, temporarily short the input terminals, providing an input of 0V. Adjust the pot for minimum voltage, then turn it up to the point where the meter just starts to measure some voltage. You've now biased the diode so it will turn on at 0V, at least for DC.

The bias can be further tuned if you have or can build an attenuator of known value. Say you have a 3dB attenuator: this represents a halving of power, and because power is proportional to the square of voltage, a reduction in voltage by a factor of $\sqrt 2$.

Perform one measurement, then again with the same input power but with the attenuator. If the diode is properly biased, the voltages measured by the meter should differ by a factor of $\sqrt 2$: any difference is likely due to uncompensated diode voltage drop. Correct it by adjusting the pot or by manually adding a correction factor in the calculation.

Accuracy could be further improved by adding a transformer on the input to increase the voltage, thus rendering error due to the diode less significant.

How to make an RF probe for accurate power measurement at QRP power levels?

Now, accurate measurement of RF power is actually pretty hard once you cross over into bands that your oscilloscope can't measure directly anymore. Say, you want to measure what your 21 cm LNA does.

Sure, you'd rectify the signal, first, like in Phil's excellent answer, but that assumes you know the frequency behaviour of your diode – which you really do not at higher frequencies. If you even could know the frequency-dependent behaviour of all your semiconductors, you'd have little need to measure the output power of your amplifier, you could just calculate it on paper (it's really nothing but a single transistor, seriously). 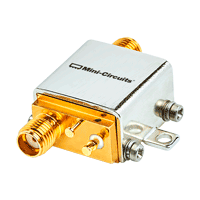 So, long story short, you need to build a detection system (like Phil's!) and then calibrate it; get the nonlinear effects out of there, and the effects that depend on frequency:

A diode is not only the perfect diode you've read about ("current through the diode is exponential to voltage across the diode yadda yadda"), but when looked at with dynamic signals, also a capacitor, meaning that it does, in fact, pass higher-frequency AC signals pretty well, especially in low-voltage situations, where charge carriers get "dangerously close" to each other and the diode "looks" like a plate capacitor with very close-by plates. (By the way, that's what a varicap is: a voltage-adjustable capacitor, which is just a normal diode in reverse operation, optimized for high capacitance shift.) 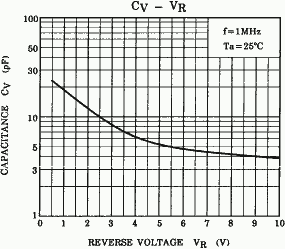 This diode has a bit of a voltage-dependent capacitance and hence acts differently on different frequencies, depending on the voltage, just to make things less easy

Soooo, you'll go, build your first measurement circuit, buy a USD 100,000 spectrum analyzer and start calibrating. Or maybe you just buy a used one, spend a lot less, not like you need to go up to 60 GHz or anything, but still 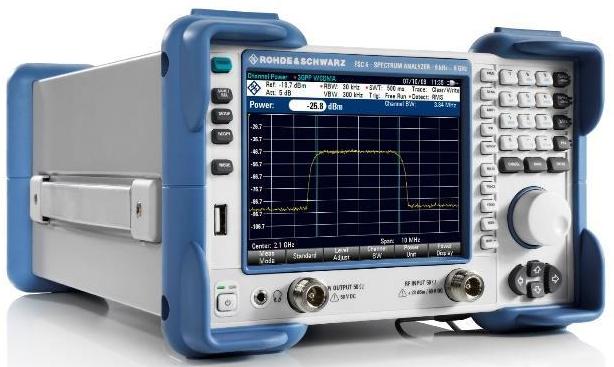 New: a proper boat. Used: A car. Or the financial equivalent.

Then you go get a coffee, leave the lab door open, the room cools down, you go back in, notice that everything changed, sigh, add a temperature probe to your measurement circuit board, note down the temperature, and spend the next four days calibrating your board. Then a friend comes over, sees what cool stuff you can do with your self-built power meter, and asks that you make him one, too. So, you take your spare parts, assemble another one, and sit another three days in the lab, calibrating that board, because at microwave frequencies no two semiconductors are identical, and especially not yours... 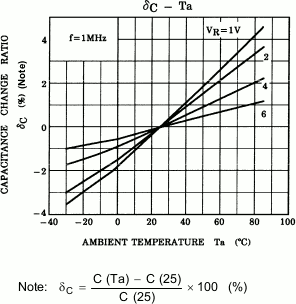 The same diode obviously also has a temperature dependency. You get the feeling physics doesn't like you... and that's a diode already partially optimized for temperature-stable behaviour

Doesn't sound tempting, right? If only there were companies that sold small circuits that they built, and tested, and calibrated themselves for this purpose...

They do. For example, Analog Devices (ADI) has a few of them. This demo board stuck out:

ADI CNO399 evaluation board for the ADL5904 power meter IC

What it does is relatively straightforward:

If you can shell out USD 150, just buying that eval board, and then talking SPI to the ADC (e.g. from a microcontroller board like an Arduino, or from a Raspberry Pi), that's a working solution; the "what the ADC says vs what was on the input curves" do look pretty nice: 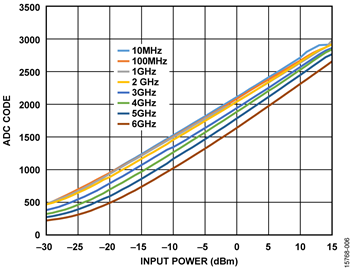 Of course, you can also just download the board layout files, have them manufactured for cheap, buy the components, solder them on and probably come out cheaper (but not as well-tested, probably, and on a different FR4 substrate, so the matching might be slightly off).

The purpose of such boards, however, is not production usage; it's to encourage you to use the schematics to build your own power meters from. Maybe the ADC is not what you're looking for? You'd be better off with an Opamp non-inverting amplifier that drives a simple analog voltage gauge? Sure! Just do that, replace the ADC, design your own board. Really, the ADL5904 isn't such a complicated beast to use in a minimal RMS detection setup: 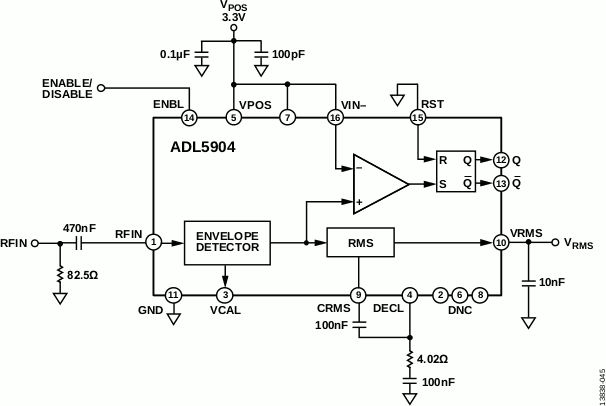 Counting that: One IC, four capacitors, two resistors; one coax connector for the input, and a stabilized 3.3 V supply IC, plus probably two more caps for that. Done!

As a starting point, this will be quite a bit more accurate over quite a larger frequency range than a much simpler single-diode envelope detector. If you can actually verify your input matching and use your oscilloscope on a low-frequency oscillation to input a known power to the detector, you'll be able to put a high degree in certainty in your power measurements.

Especially for narrowband (by modern standards, I'd call that anything < 50 kHz bandwidth) signals, the oversampling that you can do with even the cheapest SDR devices (e.g. RTL-SDR dongles) gives you excellent detectability, down to thermal noise. (Make sure you turn of any AGC, though.)

So, assuming you just want to know what the power of that single tone is, which has low phase noise (and hence very low actual bandwidth), you'd tune your SDR such that the LO of the mixer doesn't lay over your signal of interest, then filter your signal drastically in the digital domain to restrict the observed power to really your band of interest.

Then magnitude-squaring and averaging gives you the digital power.

But, what's the physical power?

With the SDR alone, you couldn't say – SDR devices are not calibrated measurement devices.

However, if you have a source of known physical power, you can measure that, and calculate a factor between digital and physical power. Easy!

Now, the task has just been reduced to:

The third point is probably the only thing you'd need to build; in interest of good performance, a lab would usually buy a calibrated noise source (examples), or use a calibrated spectrum analyzer to calibrate one, but seeing you probably are running low on lab-grade RF equipment...

Now, that's not your only option. For example, an oscillator can relatively reliably be built with a known output power in the HF ranges; you'd only need an oscilloscope to trim the gain on an opamp until the amplitude over a 50Ω load is exactly, say, 5 mV, and the rest is math :)

For higher frequencies, there's really no way around building something with a constant power, and getting it somewhere that can measure it. If you're building a semiconductor-based 800 MHz noise source to compare your other devices too, but it turns out your build is 3dB off in power, then all your measurements would be invalid.

Most homebrew RF probes use a diode with low voltage drop to rectify the RF. You then measure the resulting pulsed DC voltage to determine the power. Most people use a germanium diode like a 1N34, but these can be hard to find. You can use a schottky diode instead. You want the voltage drop across the diode to be as low as possible. A diode with a high voltage drop like the 0.7 volts of most silicon diode will distort the reading.

Add a high value resistor, 4.7 megaohm works well, and small capacitor, 0.01 microfarad for example. Connect them up as shown.

There is still going to be distortion cause by the voltage drop of the components, especially the diode. This will be noticeable at QRP power levels.

Some dummy loads include a rectifying diode that lets you measure the voltage to determine the power going into the dummy load. They basically are including a RF probe in the dummy load.

Building is educational and fun or you could just bye the W1 from Electraft (disclosure: I own one and love it) https://elecraft.com/collections/test-equipment/products/w1-100w-wattmeter-kit-1

Not the answer you're looking for? Browse other questions tagged rf-power measurement or ask your own question.