I see folding antennas of various lengths that people are using for for their HT. My question is about the optimal length. I know it may "depend" on many factors so let me know if I need to provide more information.

I know that many antennas are actually a coil of a particular length (quarter wavelength perhaps), so maybe these are actually all the same coil length. I'm not sure. But I'm wondering what factors should determine the length that one chooses.

I don't own anything outside of FRS and CB yet however I'm doing research ahead of time. To have an example, let's say I'm using the dual band UV-5R for communication on both VHF and UHF (2m and 70cm), and in an urban environment.

Just look at this beast: 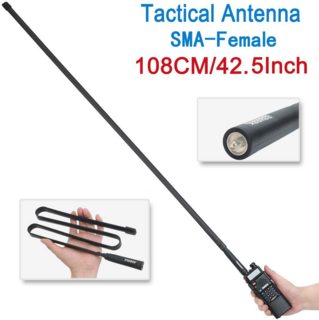 Could it be too long and actually hurt gain or pickup too much noise? Or in general, the longer the better? If that's the case, perhaps there is diminishing return and the extra length becomes just an annoyance after 47cm/18in. How should one decide?

To directly answer your question, the ideal antenna length for maximum radiation is dependent on the wavelength.

For example, CB wavelength is approximately 11m. The ideal antenna is half of that for a dipole antenna. However, most CB (and HT) antennas are monopoles, which split the antenna in half and use its mount as the other half, so the ideal CB antenna would be approximately 2.75m, or just under 9 ft, using the vehicle body as the other half of the antenna. (A vehicle with less than 9ft of metal may not work well with such an antenna.)

Similarly, the ideal 2m antenna for an HT would be approximately 0.5m with you holding the radio for the other half of the antenna, although you can also get a 1m antenna ("half wave") that will work somewhat better, as this is an end fed dipole instead of a monopole, and doesn't rely on you holding the radio to make the other half of the antenna.

If the antenna is a full 1/4 wavelength, it is typically not a coil. Shorter antennas probably are, but the length of the wire in the coil changes as the antenna gets physically shorter, so it is not direct relationship, but electrically, it will still measure as 1/4 or 1/2 wavelength.

The higher frequencies like 2m and 70cm are very dependent on line of sight between the receiver and transmitter, and thus height of the antenna is a huge factor in antenna effectiveness. Thus, the size of the antenna may increase effectiveness not because of better radiation, but because of better height, and you might get the same effect with a smaller antenna raised higher. This is one of the advantages of external antennas like the J-pole -- you can separate it from the radio with coax and raise it higher. (The j-pole is also an end fed dipole. )

Lastly, when considering the "optimal" antenna, you need to take mechanical factors into consideration. In other words, larger HT antennas are heavier and can become a huge lever arm, and put more stress on the radio's antenna connector, and have a higher chance of breaking it. Half wave antennas typically also include an impedance matching coil, which makes them even heavier. When using large antennas, some care must be taken to minimize stress on the radio's antenna connector.

It is possible to get a "better" antenna that is longer than 1/2 wavelength, but it would no longer be a dipole. For instance, a colinear antenna is a stacked phased array of dipoles and can be many multiples of 1/4 wavenlength. This describes some larger wifi antennas and possibly some vehicle antennas or antennas mounted to buildings, but you won't find a 70cm HT colinear, its just too big.

It depends on the type of the antenna.

An even longer antenna can be made with a collinear array of some other kind of antenna, often dipoles. An array allows the antenna designer to "compress" the radiation pattern, sending more of the radiation at the horizon by sending less in other directions. Provided the array is properly designed, and the other station is in a direction perpendicular to the antenna, this can improve performance.

(Though I wouldn't expect much from a $24 antenna from Amazon. It's likely little to no engineering has gone into the design and it may not even be an array.)

I had a 15" whip for my 2m HT that I thought performed quite well. Unfortunately I dropped my radio and that managed to snap the antenna. I have yet to replace it.

You're gain isn't really proportional to the length. Rather, it's about the electrical resonance of that length. Think about humming an A really loudly next to a guitar. You can make the A string start vibrating, but the other strings won't vibrate. A resonant quarter-wave at 146 MHz (right in the middle of 2m) will be about 19" long. But that's assuming there aren't any loading coils or anything else like that in the antenna.

My favorite 2m antenna though is a roll-up J-pole I made myself. Instructions here. I throws up anywhere and performs really well. I've been able to get signals about 11 miles on half a watt with it.

The optimal length for a HT whip antenna would be ¼ λ.

The smaller rubber ducky, with its comparable performance, would win hands down for its convenience and ease of use.

The performance of either would be enhanced by adding a ¼ λ flexible-wire counterpoise, popularly known as a 'rat tail' or 'tiger tail'.

A ring-type lug, attached at one end of the counterpoise, would need to be slid over the HT BNC connector before connecting the whip or rubber ducky antenna.

Typical HT antennas are very much a compromise. What would be considered a "basic" antenna at other bands would be a half-wave dipole, or a quarter-wave vertical with a ground plane or quarter-wave elevated radials. Polarization for FM is vertical, so a horizontal dipole won't work. Ordinary vertical dipoles are not very practical for portable use (the coax must be led away from the center of the antenna at right angles for a ways), but a J-pole antenna is essentially an end-fed vertical dipole that uses some impedance matching tricks. A 2m J-pole is about 60" / 1.5 m long.

I've used a 2m J-pole at HT power levels, and it makes a great antenna. It doesn't suffer reduced gain or increased noise; people on the repeater thought I was using a mobile rig rather than an HT. Generally speaking, any antenna smaller than a half-wave dipole or quarter-wave vertical (with ground plane or elevated quarter-wave radials) will suffer reduced performance. In the reduced-performance category, which typical HT antennas are definitely in, anything larger is better.

So finding the best antenna for you is an exercise in adjusting the compromise to find out what is best for you. If you're close to the repeaters you usually use, and the noise isn't too terrible, then the "rubber ducky" antenna that came with the HT might be fine. If you're in the woods far outside of town and you're trying to report an emergency, then you probably want the largest antenna you can get. Personally I have the antenna that came with my HT that is about 10" / 25 cm long, a slightly larger one about 18" / 45 cm long, and I mean to get a roll-up J-pole from Ed Fong WB6IQN for hiking.

My advice would be to try the antenna that comes with the HT, and if that isn't long enough, then get a longer one.

You still need to tune them to frequency just like any other antenna. I tuned my 18 inch to gmrs recently. And I got much better results. So my recommendation would be to get close to the wavelength you need with room to trim down the tape measure on the inside of the antenna. I think it's funny that its actual tape measure inside with numbers and all.

Not the answer you're looking for? Browse other questions tagged antenna vhf uhf ht .