What Are Some of the Most Important Characteristics Applying to the Radiation of Monopole Antenna Systems?

Such characteristics are described in Answer 1 below, as sourced in a study of antenna engineering textbooks, and by generating NEC4.2 studies. 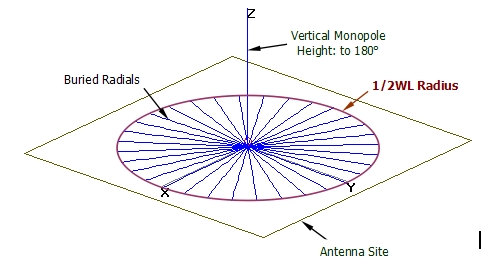 9
What are some ways to ground a transmitter+antenna in an enclosed attic?
3
What's the general difference between radiation patterns of stationary and adaptive aerials in mobile communication systems?
8
Does mounting a ground plane antenna upside down change the takeoff angle?
9
When and why does the size of a ground plane or radials matter?
2
How Might Nearby Re-Radiators Affect the Radiation Patterns of a Transmit Antenna?
2
How Does the Low-Angle Radiation of a Horizontal Dipole Compare to That of a Vertical Monopole?
2
How to compute the efficency of an omnidirectional antenna from its gain?
2
How Accurately Does NEC-based Antenna Software Calculate Vertical Monopole Antenna System Radiation Efficiency for "Far-Field" (Only) Conditions?
2
Why does an HF "monopole" need dozens and dozens of radials while a VHF/UHF "ground plane" antenna only needs four?