Say I have a shortened HF dipole (with significant inductive loading and/or capacitive hats), and can only mount it very close to ground level (but not touching), over lossy ground, and with no radials or counterposes. (situation is temporary portable operation in an extremely constrained area).

To minimize ground losses and/or maximize radiation efficiency (what little is possible given the constraints), would it be better to orient the low short dipole horizontally or vertically?

Generally, a low horizontal dipole doesn't do a good job of radiating power to where you want it. I found an interesting analysis of horizontal dipole height, which ran a number of simulations and found that at low heights (less than 1 wavelength, roughly) the dipole's radiation pattern has a significant vertical lobe. At heights of 0.2 wavelengths or less off the ground, the direction of maximum gain is straight up.

I have read elsewhere that low dipoles also tend to radiate a lot of power into the ground. So, you would be spending a lot of your power heating the ground and space.

With that in mind, a vertical dipole is likely to be more effective. In practice it's likely to be similar to a monopole with radials, which is an antenna configuration that is widely used with positive results.

Below is an analysis that may be useful in answering this question. It shows the complete radiated fields from the horizontal dipole and the vertical monopole defined there, for elevation angles from zero (the horizontal plane) to 5.7° above it.

The space wave and groundwave of the h-pol radiator are out of phase near the surface of the earth, and tend to cancel each other.

That does not occur for vertical polarization. 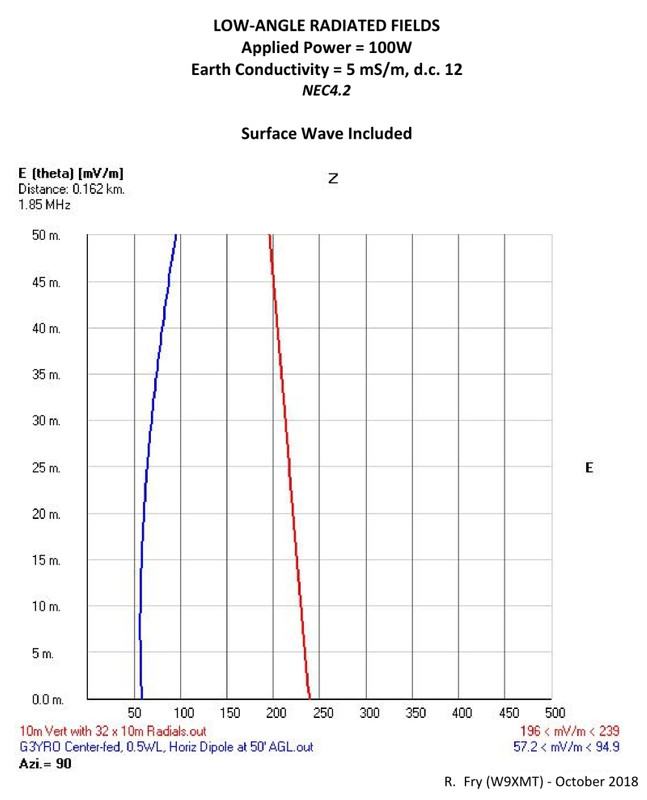 17
Should I chose a vertical or a horizontal HF antenna?
2
Horizontal dipole for a 80 foot span?
13
Is a vertical noisier than a dipole, and if so, why?
3
2 Meter horizontal or vertical dipole polarization?
6
Efficiency of short dipole receiving antenna
0
If one were to add reflector elements above and below a dipole would it change the direction to horizontal?
2
Low mass, low frequency transmission line
3
What are the effects of a ground plane under a horizontal dipole?
2
Magnetic loop antenna: vertical vs horizontal
1
Is a 1/4 wave vertical actually better than inverted L on 160m?