Which is Better to Use with Vertical Monopoles: Buried Radials or Ground Screens?

Many threads posted on various websites over the years have included statements/beliefs on this subject, but support there for the accuracy of those statements sometimes is minimal. An accurate reference would be useful.

The information below is extracted from the "benchmark" 1937 I.R.E. paper* of Brown, Lewis & Epstein of RCA Laboratories, and is based on their accurately measured data for these systems.

IMO, the outlined and underlined text at the bottom of this clip is worth remembering, and deserves greater access/acceptance.

*Proceedings of the Institute of Radio Engineers Volume 25, Number 6 June, 1937

GROUND SYSTEMS AS A FACTOR IN ANTENNA EFFICIENCY 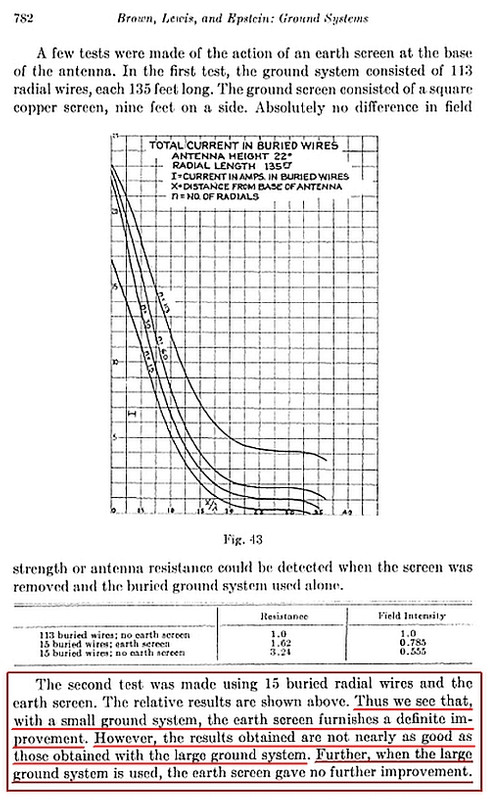 Recently I was referred by a poster on another website to a paper published in 1977 in Ham Radio (http://nc0b.com/documents/GroundScreen-sm.pdf). I had been unaware of that paper prior to this. The author's test equipment and test methods were of a professional level.

From my POV though, his conclusions would have been more accurate if one of the closing sentences in his paper had included the edit now shown between the brackets below:

\The next time you erect a new vertical, or plan to improve an existing one, consider a ground screen as either a substitute for radials, or as an adjunct to an existing [but poorly performing] radial ground system./

The reason? Regardless of their number and physical length, if a set of radials is performing well when buried in the earth around the base of a vertical monopole, there is no compelling reason to add a ground screen to it that does not significantly improve the performance of that antenna system.

The graphic below illustrates this by including the ESR at the operating frequency of a rather sparse set of short, buried radials used with an electrically short vertical monopole. The ESR of those buried radials vs. the conductivity of the soil they are buried in is shown by the red trace and the scale on the left vertical axis.

This study shows that even for this short radiator with only 32 short radials, the ESR for about 6 mS/m (~"average") or better Earth is about 2 ohms or less, without the use of a ground screen.

It also shows that reducing the ESR of the buried radial set for this scenario doesn't change the radiation efficiency of that antenna system very much over the span of Earth conductivities ranging from ~6 mS/m to 30 mS/m. 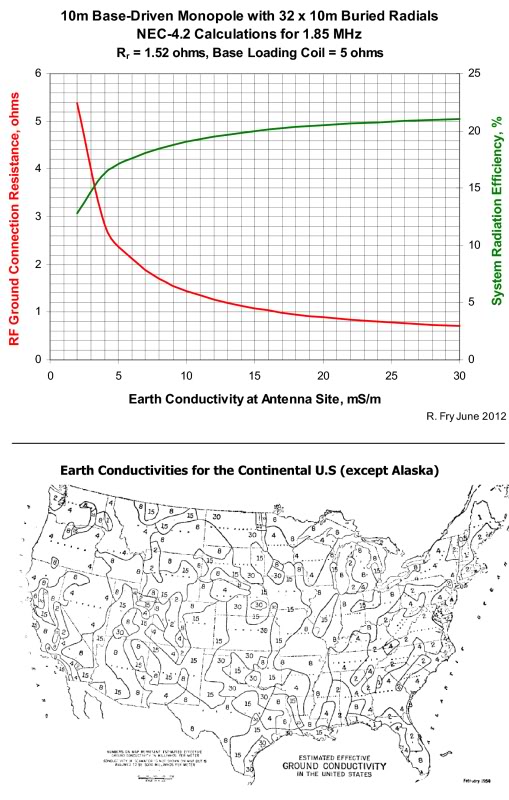 Not the answer you're looking for? Browse other questions tagged grounding vertical-antenna radial buried or ask your own question.

7
Practical 80m vertical wire antennas without radials?
0
Vertical Antennas: Compare Cushcraft R9, no radials to 43 foot vertical with ground radials
4
Can I ignore the radial elements of a 2m/70cm antenna if it's on a metal roof?
9
When and why does the size of a ground plane or radials matter?
2
Do Buried Radials for Vertical Monopoles Need to be No Longer than the Monopole Itself?
2
What sort of antenna would use a bicone or lozenge-like arrangement of vertical wires?
1
Why are many ground radials preferable to a single ground stake buried 1m deep?
3
Vertical antenna with feedpoint below ground plane?
2
radials for 6 band Hustler vertical