As a start, below is a NEC analysis of the system described in the OP.

The horizontal radials lie along the +Y or the + and -Y axes. 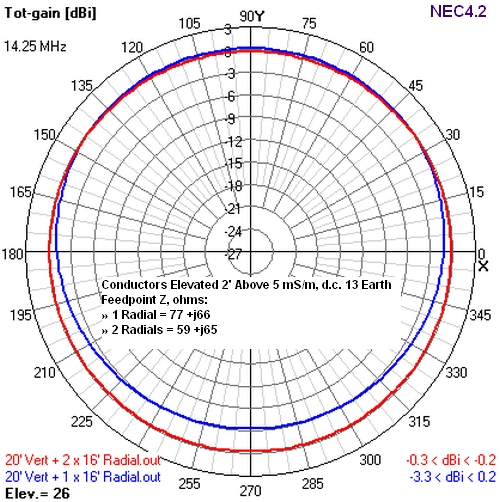 The asymmetry of a single counterpose also makes it more difficult to arrange the feed line so that the antenna's radiation pattern doesn't couple to the feedline and generate common mode currents (potential RF in the shack, plus a further distortion of pattern).

The above are rules of thumb. Best analysis would be to put your particular antenna geometry into an antenna modeling program (NEC2, MININEC, et.al.)

Not the answer you're looking for? Browse other questions tagged antenna vertical-antenna counterpoise or ask your own question.

1
Vertical Hustler - do I need any radials?