How would a time-difference-of-arrival receiver with two antennas know which side the signal is from?

An easy TDOA design by Byonics was published with the following schematic: 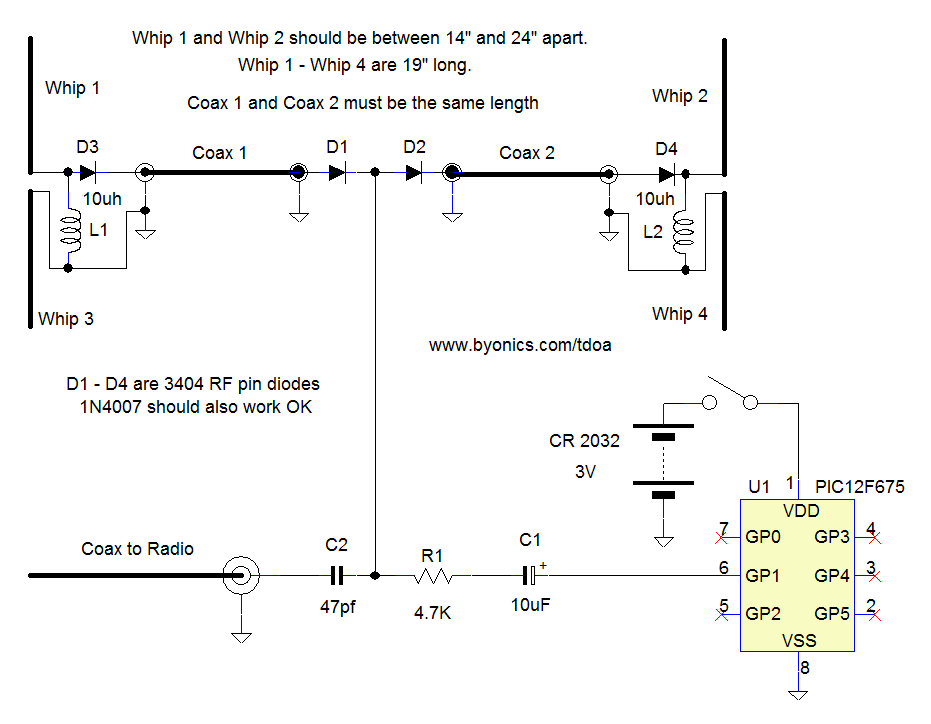 Note that the transmitter being on that perpendicular line means that it could either be directly ahead, or directly behind. You would need to move some distance along the line of the antennas and take another bearing to determine which direction the transmitter actually was. In the next version, when the audio from the receiver is fed back into the chip and analyzed, it will be able to tell if the signal is coming from the left or right when the tone is present, and light the appropriate LED. (emphasis added)

With the radio's audio going into the microcontroller, and the antennas out of phase with the source, what is the microcontroller looking for, or how would it tell, whether the signal is coming from the right or the left of the dipole array?

The green waveform is the switch control and the blue waveform is the demodulated signal (the frequency deviation). After audio-frequency filtering on the output, we get a more ordinary tone, though with a delay introduced by the filter:

If the time delays of the arriving signal are the other way around, then the phase shifts are opposite, and the audio signal is negated — or, equivalently, phase shifted by 180°.

Note that the exact phase difference found will depend on all delays in the system, including in the external receiver; but that would be simple to calibrate for.

I have built a simulation of this system using GNU Radio, and used it to produce the plots shown and confirm that the technique can produce a reliable left/right indication (at least for an unmodulated input). Here are the GNU Radio Companion file and generated Python program (GNU Radio 3.7+ required). 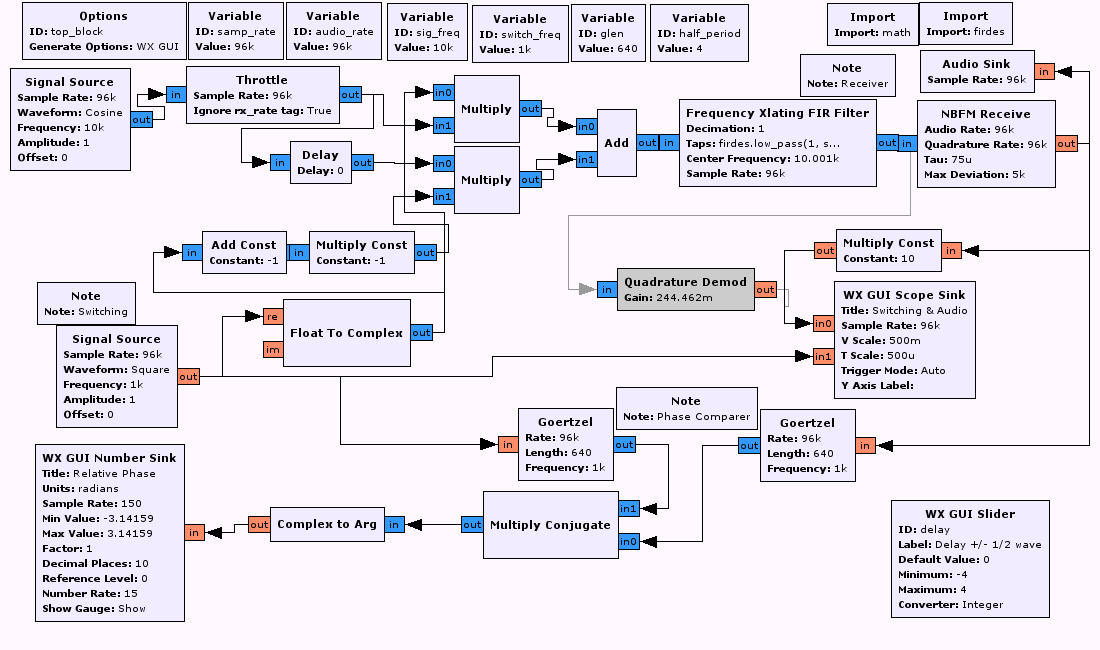 Note that while the RF sections of this simulation use complex (analytic) signals, there is nothing in those sections which would make a difference from the results obtained by using real signals at a nonzero IF as usual analog RF electronics do.

On the other hand, in the perpendicular direction, it is not possible to distinguish the front and back sides; there is a fundamental ambiguity due to the symmetry of the antenna array. No direction finding system can distinguish between directions in which its antennas are symmetrical; the asymmetry which allows the discrimination described here comes from the switching of the antennas rather than their shape.

Not the answer you're looking for? Browse other questions tagged receiver theory direction-finding phased-array or ask your own question.

13
Direction finding: How to find a stuck FM transmitter on 70cm?
2
antenna circuit to hear or show radio direction

7
How is the FM-signal demodulated in my receiver?
3
FFT frequency shift corrupting phase
4
Audio tones and patterns used for fox-hunt transmitters?
1
There is no reverse flow of energy in a mismatched transmission line, is this correct?
0
Variable polarization Yagi using two antennas on the same boom, joined together with variable feedpoint phase?
4
SDR: How are I and Q determined from the incoming signal in quadrature sampling on the receiver side?