Why is the electric field orthogonal to the magnetic field from an antenna?

What causes this? Are there any cases where this might not be true, or are the fields always 90 degrees to each other?

The short answer is no, there are no cases where radio waves would not have orthogonal magnetic and electric fields.

In physics, a radio wave, indeed all EM radiation is called a transverse wave, meaning, by definition, that the oscillations of the waves are perpendicular to the direction of energy transfer and travel.

The electric and magnetic parts of the field stand in a fixed ratio of strengths in order to satisfy the two Maxwell equations that specify how one is produced from the other. These $\mathbf{E}$ and $\mathbf{B}$ (in physics the magnetic part uses B for some reason, I'll maintain that convention to make it easier for the physics folks to correct any errors) fields are also in phase, with both reaching maxima and minima at the same points in space.

OK, so we know this much already, but why?

So that's the general theory, this can be solved for the plane wave case (the one we are interested in):

Then planar traveling wave solutions of the wave equations are:

For radiated fields, the electric field (E) and (H) are always perpendicular. No one knows why this is more than we know any other physical law, but so far as anyone can demonstrate, it's always true. As WPrecht says, Maxwell's equations require electromagnetic waves to be this way. There's also simpler, albeit less complete mathematical explanation: the Poynting vector. This vector is simply the cross-product of E and H:

This vector S represents the direction of energy transfer, so it follows that if the energy is radiating away, then the electric and magnetic fields must be mutually perpendicular to this, by the definition of the cross product operation.

You can gain some intuition into why this is true by considering the fields around a dipole. Say the dipole is vertical. The electric field lines are vertical, because the voltages are different along the length of the dipole. Meanwhile, current is flowing through the dipole, and current through a conductor makes magnetic field lines in concentric circles around that conductor. The result looks like this: 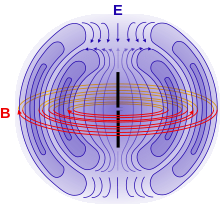 (Here they've used B for the magnetic field instead of H. There's a difference, but it will send us off on a tangent. Without compromising the understanding of this particular problem you can consider them to be the same.)

As you can see, the fields are perpendicular, and they stay that way.

The two fields do not have to be orthogonal, and in the diagram posted they are in fact NOT orthogonal everywhere (for example, what do E and H do near the ends of the antenna?). Orthogonal E and H field are the property of a propagating EM wave in free space. Around an antenna, within a few wavelengths distance, there are "near field" or "Fresnel" regions in which there are non-propagating waves. These waves do not have necessarily orthogonal fields. More detail can be found in a reference text such as Antenna Theory by Balannis.

Note also that the fields may be orthogonal and out of phase with each other. You might see this from a circularly-polarised antenna.

Not the answer you're looking for? Browse other questions tagged antenna propagation or ask your own question.

3
What is Circular Polarization?

3
How to receive a signal from multiple sources simultaneously (helical antenna)
8
Communications : Ground wave propagation
1
How the performance of the half wave dipole antenna changes as the length changes?
4
Dipole loading coil winding directions?
1
Beam antenna changed directivity
2
High Altitude Balloon Antenna Design
3
What is the radiation pattern of an ~60 foot end fed wire antenna used for 40 meters?
1
What is the formula for coupling between non-parallel wires?
4
Frequency selective surfaces working principle