How to determine frequency and launch angle given a target skip distance?

I would like to communicate with someone 1000 miles (1600 km) away. I'm not sure how to target a specific distance. 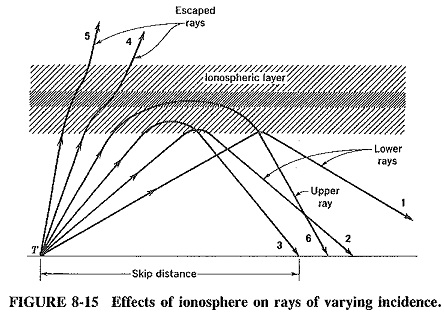 I assume it's an interrelation of the following factors:

This distance is too far for groundwave or NVIS, but it seems awfully close for skywave communications.

How do you figure all of this out? Can you estimate where the skip zone (dead zone between skips) is? And can you change the effective skip zone distance by selecting an different band?

Specifically, I'm trying to reach from Portland, Oregon to Phoenix, Arizona (USA). Thank you for any insight you can give me.

The actual math here is annoying enough that you will hardly ever want to use it (it requires knowing the incidence angle of the signal on the ionosphere, which is dependent on the height of the F-layer and the distance between the stations taking into account the curvature of the Earth). Zolesi and Cander gives the formula for incidence angle as $\varphi_0 = \arctan \frac{\sin\frac{\theta}{2}}{1+\frac{h'}{R}-\cos\frac{\theta}{2}}$, where $\theta$ is the angular distance between the two points on the surface of the Earth, $h'$ is the virtual height of the F-layer, and $R$ is the radius of the Earth. Then the formula $MUF(D) = f_0 \sec \varphi_0 $ can be used to figure out the path MUF given the critical frequency at the midpoint of the path.

But that's pretty hard, so let's fudge it. First off, let's assume that $h' = 300 \,\mathrm{km}$, which is pretty reasonable, especially in the daytime. Then we can precompute some values of MUF(D) for different distances.

The "skip zone" is simply the areas which are too far away for line-of-sight or groundwave, but close enough that the effective MUF at that distance is lower than the chosen frequency. As such, it's completely dependent on the frequency you're using. For frequencies less than the "critical frequency" (foF2), there is no skip zone (these are the NVIS frequencies). As the frequency increases beyond the MUF for longer and longer distances, the skip zone grows, until no propagation is possible. Because the Earth is curved, the incidence angle can't be arbitrarily low — even a signal that leaves the Earth completely horizontal is going to reach the ionosphere at an angle of 15-20°, after travelling 1500 - 2000 km. For this reason, the longest possible single hop between points on the Earth is around 3000 - 4000 km in distance, and that's why we use MUF(3000) as a practical upper limit for skywave frequencies.

As an alternative to figuring all of this stuff by hand, you can use a tool like ITURHFPROP which does the math for you, based on statistical models of what the MUF and other variables will be for a given sunspot number, time of year, time of day, and location. I've chosen predtest.uk because it allows me to direct-link to results. After setting the TX location to Portland, the RX location to Phoenix, both antennas to "Dipole", power to 100W, and mode to SSB, the output should look something like 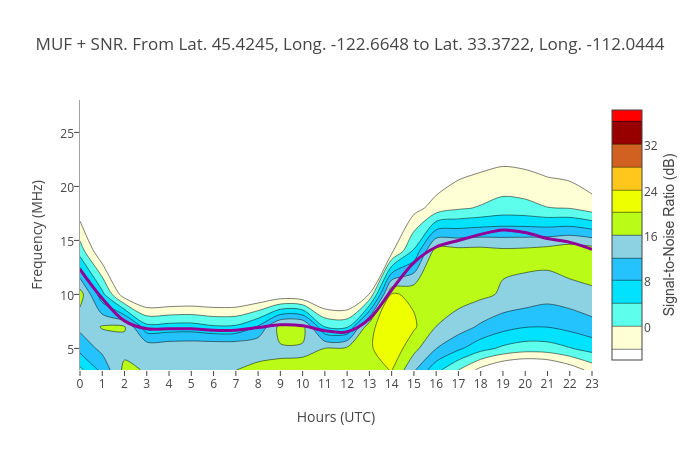 which shows the performance of different frequencies vs. UTC hour, for the month of February 2020. It indicates that your best prop is likely to be on 40 meters around sunrise, but also that 20 meters should work well from the morning until the late afternoon, 40 meters should be acceptable (if not great) at any time of day, and 80 meters may be usable at night.

Not the answer you're looking for? Browse other questions tagged hf propagation .

4
How and why sunspots affect propagation in HF bands?
10
How much RF energy do trees and branches absorb?
6
How to determine antenna height for given HF frequency and coverage radius?
10
How do I find a frequency to call CQ on during a contest?
8
How do I maintain my frequency during a contest?
6
During a radio contest, how do I determine if a station is "too faint" to be worth trying to contact?
4
How does one know when band conditions are optimal and what factors to consider?
1
How much is the greatest distance of a communication link that man can reach? Intergalactic? (ascertainable)