ZS6BKW deaf on all bands except 40

However, I cannot hear anything on any band. Nothing whatsoever. On 40m I get some voice VERY faint on 7.070.00 and 7.095.00. As far as I have read on google I can use any length of coax from the ladder line (which is a specific length) to the radio.

I have a homemade ZS6BKW antenna so I might be able to provide some insight, even though I've only used it for a few weeks now. I get good reception on 40m and 20m with it (when conditions are favorable), and have not spent much time on the other bands. No tuner except for the built-in one on the IC-7300. With it in a less-than-ideal inverted V formation, and with my QTH laying between mountains in Colorado, USA, I've still reached Antarctica and Australia on WSPR, and around North America on FT8 and SSB.

The first thing that makes me think something is wrong is that you're seeing a 1.5:1 SWR on 80m. The ZS6BKW is not an 80m antenna without a tuner. Mine shows 5.5:1, and the "standard" design should be north of 4:1 unless you've got some relay-controlled stuff going on. I think you're seeing some kind of fake resonance (akin to a dummy load), unless perhaps your feedline is resonant which is also not good. You also should see very, very high (> 5:1) SWR on 60, 30, and 15m. If you're seeing low SWR on those bands, I guarantee you something is wrong with the antenna or your feedline.

I would recommend picking up a NanoVNA and adapters or some other antenna analyzer. You should see clear dips below 3:1 for 40, 20, 17, and 12m, with part of 10 and 6m bands covered, and a slight dip for 80m that would require a tuner.

If you do see the proper dips in SWR, and you've tested your feedline, then I would try doing something like WSPR and see who reports you on the other bands, or trying to reach a friend at an agreed upon time and frequency, or tune in to a nearby WebSDR to listen for yourself.

If it helps, here is what the NanoVNA shows as SWR for my ZS6BKW antenna, as measured at the feedpoint, when I was in the process of trimming it (it was a little long here for 20m). Notice the 80m dip on the far left edge of the chart is about 6:1 (each horizontal line is about 1 SWR with the bottom edge being 1:1). 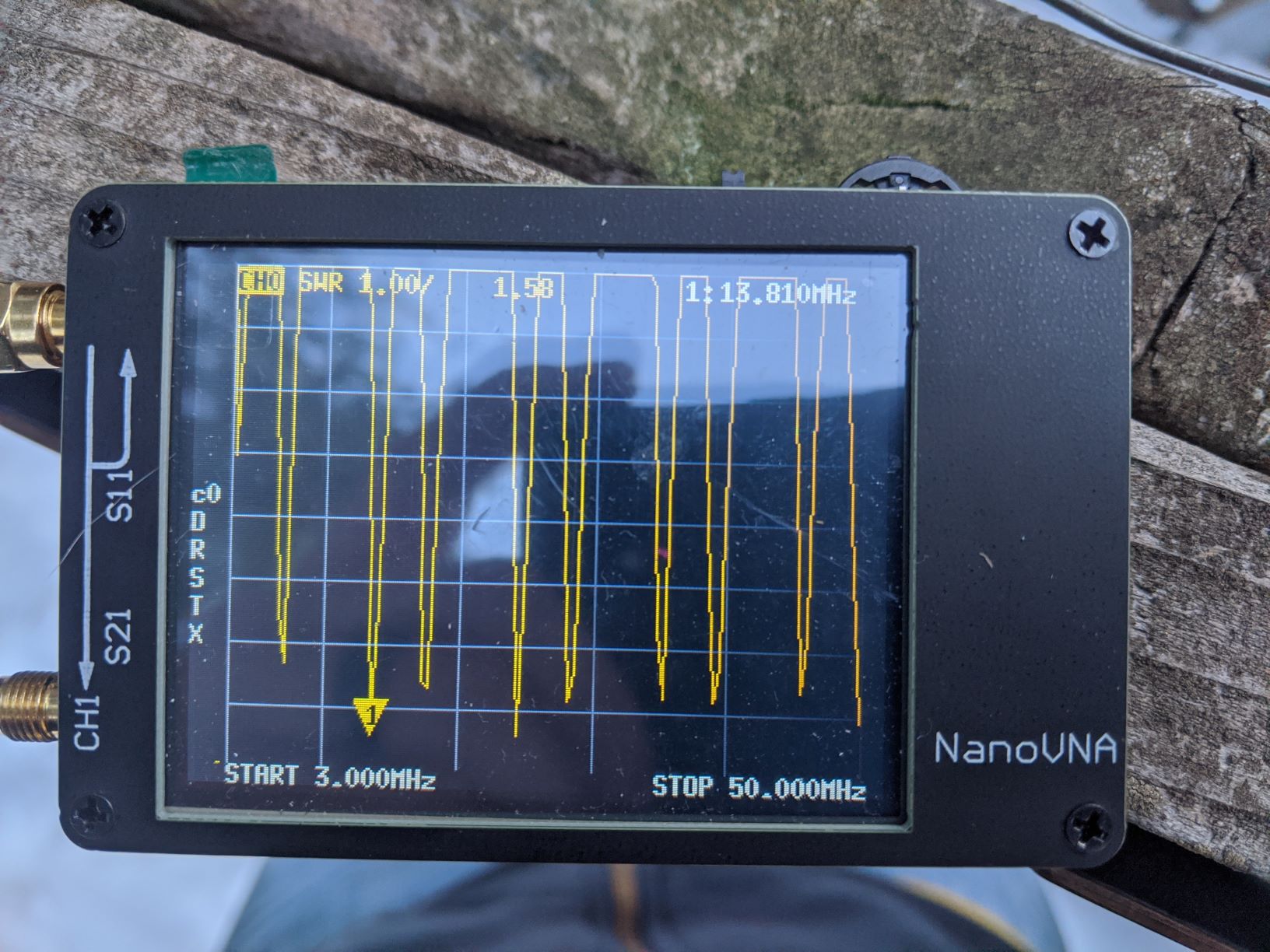 Edit: I missed from your question that the MFJ-269 is an antenna analyzer, I assumed it was some kind of inline SWR meter in the shack. I would confirm with it that you have high SWR at the feedpoint on 80/60/30/15, and that you do not have a short (low-Z). I think it might be possible that a short at the end of the ladder line where it meets the dipole legs might result in a false low SWR reading, but someone with more experience with antenna modeling might be able to confirm or deny that.

Not the answer you're looking for? Browse other questions tagged antenna swr-meter .

5
Running ladder line through window from inside shack to outside dipole antenna - what to watch out for?
4
Which is better in my situation: Balanced dipole, or as much wire as possible in the air?
2
What kind of 2 meter antenna is this?
1
How to interpret VSWR results for an attic antenna
2
Why SWR significantly changes with adding 10-30 meters of coax in presence of RFI choke?
1
Troubleshooting 5BTV antenna
0
SWR jumps to maximum of gauge
6
Antenna options
1
SWR erratic based on time of day
1
Common-mode choke (CMC) hurting my SWR. Live with it? Drop the choke?