What exactly was a decremeter and how did they work?

In A Century of WWV, I found this mention of an unusual sounding instrument that may have once been commonplace:

Calibration work was mainly focused on decremeters, instruments designed for measuring the decay, or decrement, of a pulsed radio signal, such as that generated by a spark transmitter typical of the day. Decremeters were essential in minimizing the interference produced as much as possible.

Another (much older) NIST publication titled A Direct-reading Decremeter and Wave Meter describes the motiviation for these devices:

[…] when persistent oscillations of single frequency are emitted from a radio transmitting station much more selective receiving apparatus may be employed with advantage at receiving stations, permitting sharp tuning with consequent minimizing of interference caused by stations other than those with which communication is desired.

These devices were used either in the days of, or during the transition away from, spark-gap transmitters.

Some notes on the Doolittle Decremeter describe that implementation as a "transmitter antenna tuner" and indeed the circuit diagram from the NIST decremeter paper looks to be in that vein as well: 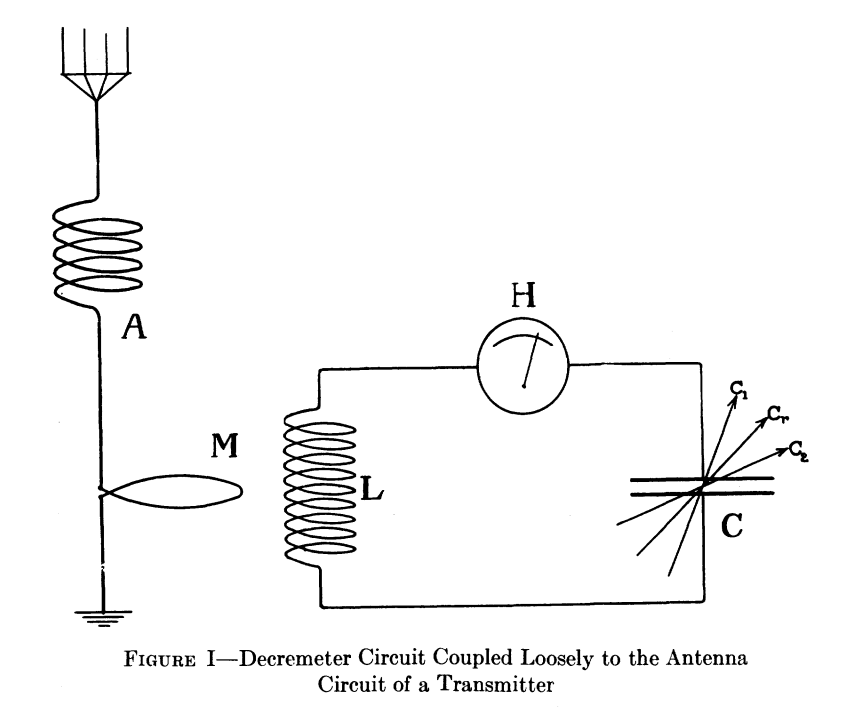 Am I right to understand that rather than measuring a signal directly, a decremeter essentially measured what we would now call the "Q" of an antenna, and in that way — indirectly — would determine how long that particular antenna would let a transmitted pulse ring?

The longer the system "rang", the higher the average power --which is what the decremeter measured-- and the better the signal could be copied over longer distances.

Not the answer you're looking for? Browse other questions tagged measurement equipment history or ask your own question.

6
How should this SWR meter's directional coupler work?
2
What were the reasons why ATIS identification was introduced?
10
How did hams manage to tune their antennas before VSWR meters?
4
When was the first radio transceiver (transmitter/receiver) built, and by whom?
5
How did the terms like QRZ, QTH, and other forms of ham shorthand evolve?
9
What did it mean to “align” a radio?
1
How did SMA connector size become standard?
3
What do old unit abbreviations like “mfd” and “kc” mean, and where did they come from?