What causes differences in properties of ferrite cores from same material?

Why are the shapes of the impedance curves different for cores made of the same ferrite material? 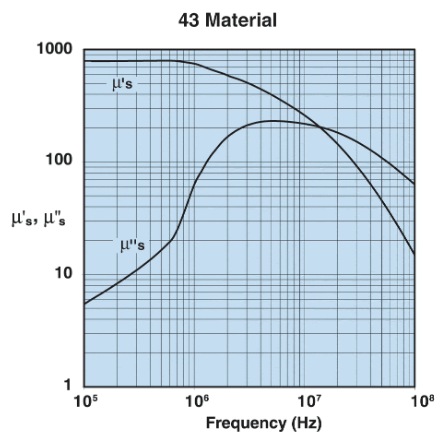 $L_0$ is calculated as: $$L_0 = \frac{4 \pi N^2 10^{-9}}{C_1}$$ where N is the number of winding turns and $C_1$ is the core's "structure constant" or "form factor". $C_1$ is $\frac{l_e}{A_e}$, the ratio of the effective magnetic path length to the effective magnetic cross-sectional area of the core, physical characteristics that are constants for a given core's geometry. Since all of the parameters are constant, $L_0$ should also be a constant.

Since $L_0$ is a constant for a given core geometry and $\mu_{s}^{'}$,$\mu_{s}^{"}$ are inherent properties of the core material, the shapes of the reactance, resistance and impedance curves vs. frequency should be the same for all cores of the same material, but this is not the case as shown below for two 43-material cores from Fair-Rite:

What is the cause of the differences in the shapes of the two sets of curves?

Browse other questions tagged balun ferrite or ask your own question.

2
Ferrite Rod Price Differences
2
What core material do I need to construct a 1:1 unun for 6M?
1
Need a ferrite suppression material for choking 15 kHz to 60 kHz
7
What is the maximum number of turns in a ferrite core used as a common mode choke?
0
Can I make ferrite paint? Will it shield my antenna from my roof?