I just got an old brass key at a hamfest, and it appears to be in pretty good mechanical condition, aside from some dirt and dust. Taking it apart, the key (apologies for not knowing the exact terminology) is held in place by two cups with four ball bearings in each cup (see picture below). The grease in the cups has long since turned into some sort of solid and I would like to replace it, however I haven't been able to figure out what I need to use. What kind of grease do I need to use for a Morse key? 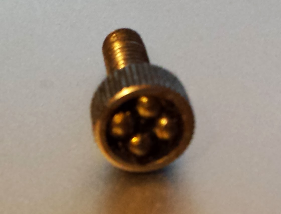 I would suggest that these were probably designed to run dry or very lightly oiled (ie: no grease) and that some previous owner took it upon them self to "fix it" using the wrong grease. There will most certainly not be such a thing as a grease specific to Morse keys. (So a quick internet search for "precision bearing lubricant" will give you more info than this site).

I would first clean them thoroughly with a solvent to remove all old contaminants (even WD40 if you have nothing else). Then use a very light oil primarily for rust protection (assuming the bearings themselves are not brass) and should not use "grease".

You really don't want any noticeable lubricant build up. You may even decide to oil it well but then dry of the components with a shop cloth (which doesn't leave any fibers behind, unlike a paper towel). This would leave only a microscopic film of oil filling small surface irregularities within the cups/bearings.

Grease isn't really necessary when these bearings aren't actually seeing any serious mechanical load (rotation/torque), there is no need to facilitate heat transfer, etc. Grease is intended for application with serious work being done such as machinery/automobiles, etc and facilitates repeated rotation and torque loads, heat transfer, noise control, and rust prevention. A Morse key in your ham shack should not require any of this.

As you are an engineer, I would expect some precision in your wording:

Grease will not "turn into" an abrasive (as in it won't naturally degrade into an abrasive on its own). It may collect abrasives (ie: dirt/sand/etc), but this does require significant exposure to undesirable contaminants.

Old grease/oil will easily clean out with a solvent, however "abrasives" may be more stubborn. You may need to try using a syringe with a needle to create a little precision pressure washing with your solvent to displace contaminants caked in the corners. You may also need a precision scraper if you have dried/caked contaminants in the bearing cups.

Once cleaned up, a simple light oil, such as 3-in-1 household oil, is sufficient. There is no need to use a real grease or heavy oil, but a light oil will prevent oxidation, reduce wear, and make the action a little smoother than dry bearings.

Note that while this isn't a big piece of machinery, depending on the materials involved and how much and how fast you use your key, you can wear the bearings or bearing surfaces out. Further the bearings are often only used in a very small range, back and forth, rather than completing circles. If you do use it heavily, spinning the bearings around a bit every so often may help you avoid wear patterns that could make the key feel loose, sticky, or hard to adjust.

Depending on previous usage you may already be dealing with these issues. They are relatively minor, though, and the key is certainly usable, but be aware that some keys feel worse or more difficult to adjust than others due to this type of wear.

As far as cleaning this up, a heavy duty degreaser should take care of it. Don't use anything abrasive. If you are picky, consider keeping the bearings in order and putting them back in the same order they came out. Depending on the age of the key and usage patterns, this can make a difference, though in most cases it doesn't.

I like a general purpose machine grease, or plain old fashion machine oil, which is easily cleaned up with used gun patches inside the -40 to +300 °F temperature range. Grease is oil with fillers.

Some good reads may be found at: www.nmbtc.com/bearings

Remember, metal and grease on skin is what we call 'bear s...'.

Not the answer you're looking for? Browse other questions tagged cw repair or ask your own question.