What causes the light and dark bands (of background noise) in an HF waterfall display?

While monitoring the 40-meter band (among others) throughout a typical day/night as propagation changes I have noticed there are often bands of very low noise (black area) and others with much higher noise (some color) in the waterfall display. These are much too consistent, persistent, and wide bandwidth to be intentional signals of any type.

My two-part question is:

Hypothesis: My best guess is that this is something do with signals being absorbed, reflected, transmitted or not transmitted from a distance by or through one of the ionosphere layers. Still, I'm wondering if there is something more specific and how the phenomenon relates to the second part of this question.

Requested example screenshots: I know the WSJT-x "waterfall" is not technically the same as the waterfall display of an SDR but I don't have that hooked up right now. However, the visual effect is similar. 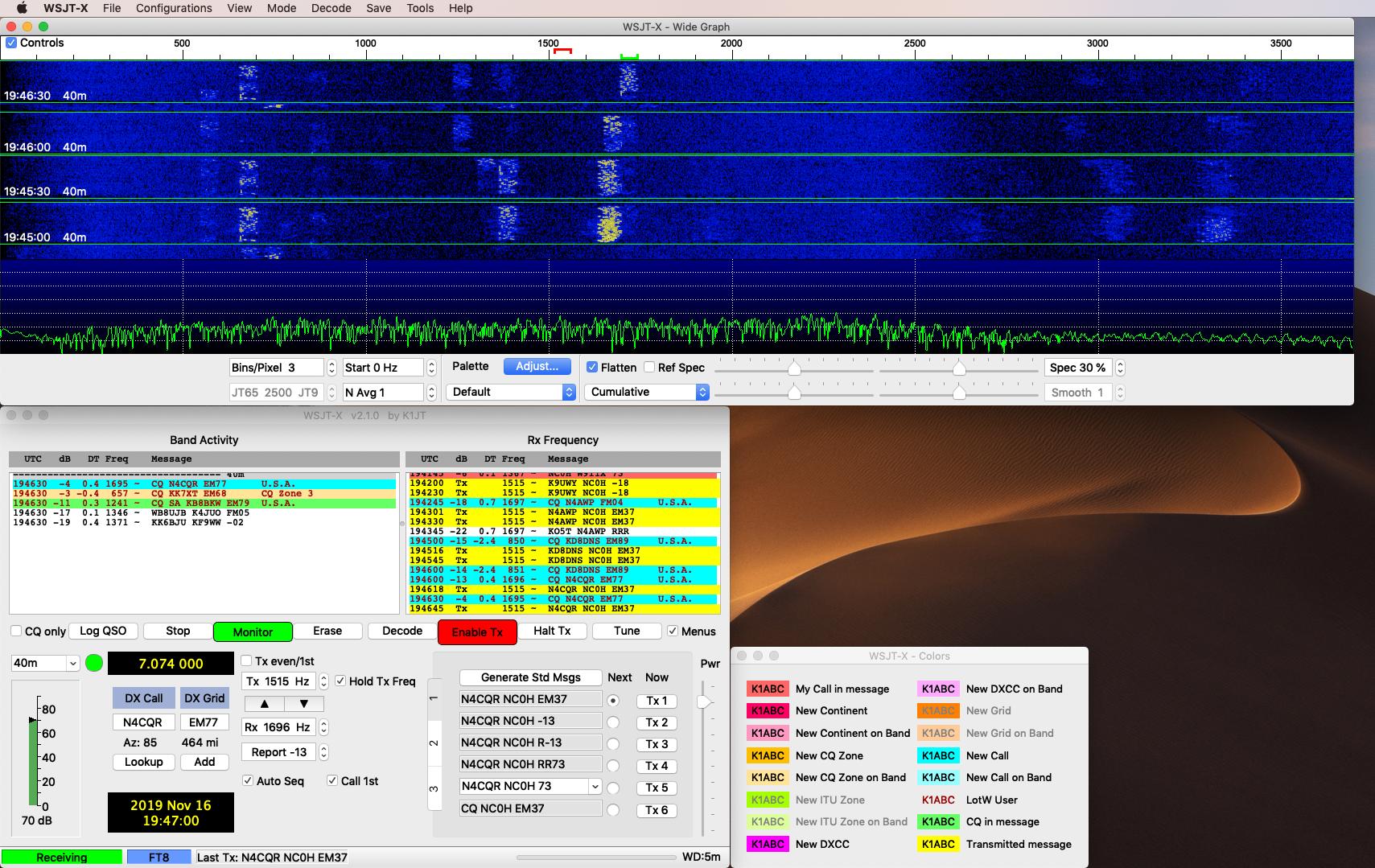 It's not something you need to worry about, as the digital modes in question don't depend on absolute signal strength at a specific frequency as much as they rely on signal-to-noise ratios.

Often, the source of bands of noise in an SDR spectrum is locally generated RFI or EMI. During a neighborhood power outage, one might notice a large number of these bands disappear. Sharper bands in the waterfall can sometimes be mitigated by reducing or choking EMI sources in your "shack".

Other possible sources for these bands can be ripple in passband of the various digital filters in the DSP signal chain (for anti-aliasing, decimation, FFT windowing, audio, etc.)

Yet another possible source might be antenna gain and pattern, which can vary with frequency.

Not the answer you're looking for? Browse other questions tagged propagation frequency noise panadapter-and-waterfall .

16
What bands and modes will give me voice at 3,000 miles?
6
Effect of night on VHF/UHF propagation
4
How many frequency channels are there in a frequency band?
11
How does VHF/UHF propagate beyond the expected (radio) horizon?
16
What is the cause of this unusually long period of terrible HF band conditions?
3
How can I determine if out of band interference is affecting my AIS reception?
4
How does lowering the RF Gain help with SNR?
4
How to track down and neutralize this apparent mixer creating noisy emissions around my signal?
2
Why is QRN so bad on the low HF and MF bands?
4
QRN: How to chase down a solid S9 noise floor on 40m only