I'm designing a weather balloon with a club at college. We want to build the antenna from scratch to learn more about antennas but are at a loss as to which antenna design would actually work for high altitude balloons.

For reference, we are using an HX-1 as our transmitter and will be picking up APRS packets from the ground using a Baofeng UV-5R. I've read a lot about quarter wave dipole antennas being used in high altitude balloons, but someone also told me that they need connection to a ground plane. Is this true?

Also, we're considering using a 2m dipole antenna. What is the difference between these two antennas? Is one better than the other? I know the wavelength of 144.390 is 2m, but is there any advantage to using a 2m antenna over a quarter wave dipole antenna?

And since the 2m dipole antenna isn't omnidirectional, would this be a problem for transmit range?

The radiation pattern of dipole antenna is just the double (like mirrored) as a quarter length antenna. The RC planes usually have two dipole antennas, that are positioned 90 degrees with respect to each other, so it can cover almost any angle. But for a baloon, this might not be necessary, if you use gravity to position the antenna. Maybe a better antenna is a directional antenna, like helix or some other, because everything you will transmit in sky is wasted, so think about using directional antenna with a pattern like semi sphere.

IMO, simplest way is to make a folded dipole antenna with a BALUN and one solid tube as reflector. 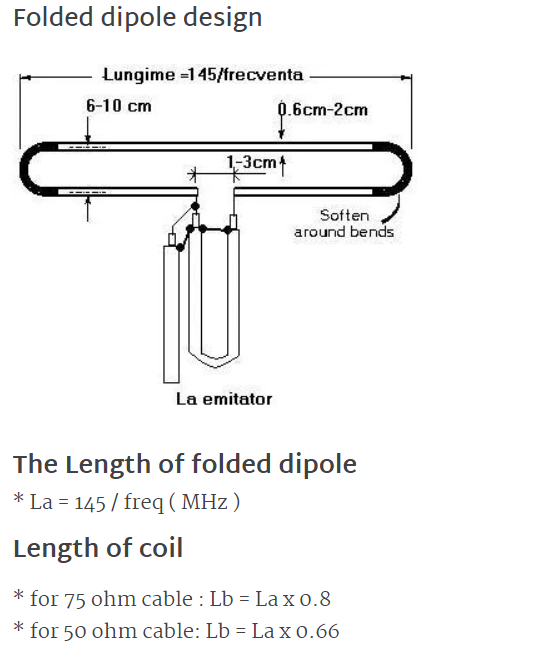 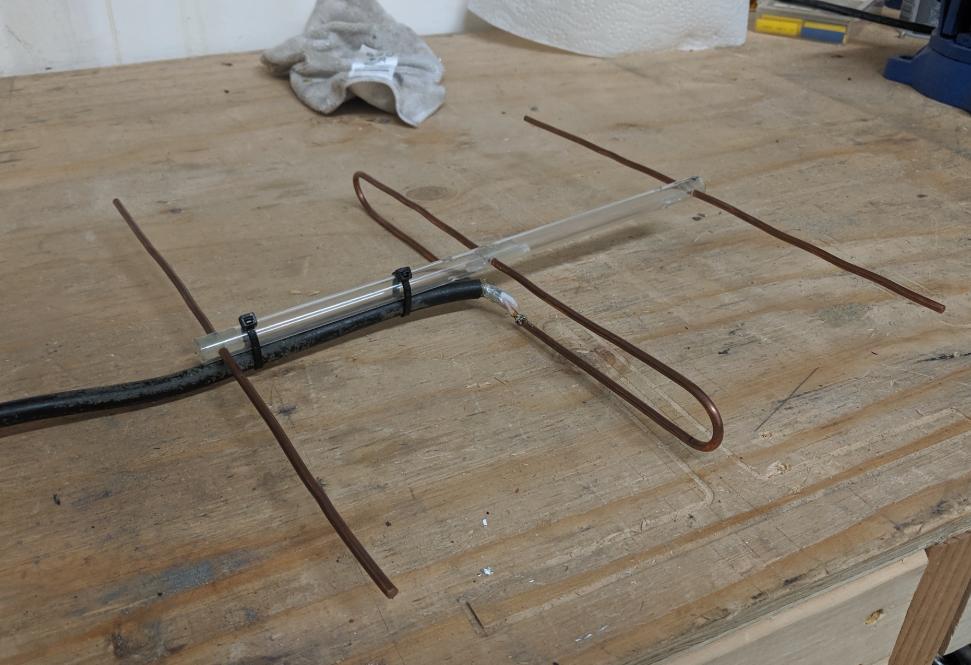 Some friends of mine and I launched a balloon a couple of years ago. We used an antenna based on the design shown here: http://www.trackuino.org/2010/04/trash-digging-at-its-finest-111-swr-vhf.html

Unfortunately, the links are rotting. That page still exists, but the linked photos don't, nor the original reference they used. But the latter was captured by archive.org: https://web.archive.org/web/20160509134815/http://ccarc.org/_misc/so-239_ant.html

The basic idea is a vertical radiator wire and four radials. The radials are directed at a 135 degree angle away from the radiator, at 90 degrees from each other.

Unfortunately, we were all neophytes (still are) and so much of our work was basically "cargo cult". I can't tell you whether this design would have worked better or worse than a dipole or other design. I can't even say whether we configured it correctly; we had the option to point the radiator up or down, and chose down. For all I know, we would've gotten better performance the other way.

The source material actually says that the impedance of the antenna can be adjusted by varying the vertical angle of the radials, but as you can see below, we didn't bother to do that.

But, it did work, and quite well. The balloon reached its intended altitude of roughly 110,000 feet, and we had a good signal for the entire flight, except at the lowest altitudes where it couldn't reach a repeater. We also had a direct receiver, which worked fine at launch, but we were having trouble following the balloon's flight track on the ground and so weren't close enough to receive at the last thousand feet or so when the repeaters also weren't receiving.

The biggest problem we had was due to mounting the radiator wire pointed downward. That put the antenna in the most vulnerable spot. Our parachute didn't fully deploy, and the subsequent hard landing bent the antenna, so we didn't have any signal after the landing. It took a bit of searching, extrapolating from the last known position and general horizontal velocity, to find the package after it landed.

Unfortunately, it turns out none of us took a decent photo of the antenna itself. Here's the best one I could find, showing the antenna separate from the package before it was attached (we 3D-printed struts to support the antenna near its base): 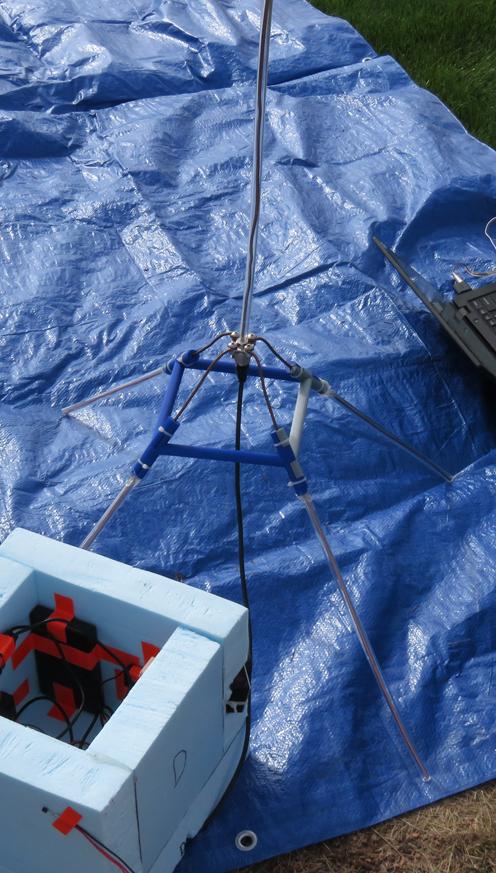 It's hard to see in the photo, but we neglected to use the overlapping attachment for the radials as suggested in the source material. I think that would've been more useful/important had we not had the plastic bracing to keep the radials in place.

First - your "2m dipole" antenna and "quarter wave" antenna are almost the same thing. A "quarter-wave" antenna is really just a "dipole antenna" with the bottom/ground element bent at an angle - usually 90 degrees. This might also be referred to as a "ground plane" antenna. If you took this "bent" antenna, and straightened it out, it would be a "dipole antenna". =)

Second - both a "2m dipole" and "quater wave" (or ground plane) antenna are, indeed, omnidirectional. Your high altitude balloon (HAB) payload should have absolutely no trouble being heard on APRS once it reaches about 300-500 feet above the local terrain.

My suggestion for which antenna to use on your HAB is to use a simple wire dipole antenna. For 2 meter APRS on 144.390 MHz this would be two, 19-1/2 inch pieces of wire (AWG 28 enameled copper wire works fine), with the driven element (the one connected to the radio's RF output/connector center pin) pointing DOWN towards the earth, and the other element (the one connected to the radio's ground) pointing UP.

The element hanging down (driven element) does not need any support - gravity will do the trick. You can use some tape to secure the element pointing UP to the rigging lines that attach the payload to the parachute/balloon.

You want the DRIVEN element pointing DOWN so that when the balloon pops, all the rigging lines between the payload and the parachute/balloon don't tangle up and bend the DRIVEN element. Don't be concerned about the tangling or twisting/breaking of the ground wire for the antenna - the radio signal will still get out!

Pointing the DRIVEN element DOWN from the payload gives your payload a much better chance of continuing to transmit data during the descent - especially if your HAB traverses the thinner portions of the atmosphere (e.g. anything above 40,000 feet), where the drag effects of the parachute are not yet significant.

If you can afford the payload weight, you may even chose to use a 2 meter "rubber duckie" antenna, coupled with a single 19-1/2" AWG 28 ground wire. My colleague and I have launched multiple HAB APRS payloads using this configuration, and have had no trouble being heard on 2m APRS using only 1/4 watt! Again - if you can afford the weight, using a "rubber duckie" may be a good compromise between potentially losing the antenna due to tangling with the rigging (or impact with the ground), and good signal reception at APRS distances.

Using the "rubber duckie" and a wire ground element, my colleague and I were able to directly receive our 1/4 watt 2m APRS signal from a distance of over 125 miles, and at no time during our HAB's 500 mile journey was it ever out of range of the APRS network. The website aprs.fi reported that our payload could be heard out to a distance of 250 miles (a 500 mile diameter ground circle!) when we were transmitting 2m APRS from 60,000+ feet! (Don't forget to change your APRS path to WIDE2-1 while at altitude!)

By the way, we chose to implement two-way commanding over APRS (using APRS directed messages) between the ground and our balloon, and the APRS network faithfully relayed all of our commands/messages to the payload throughout its flight. The payload had no problems receiving our commands over both the wire dipole and the "rubber duckie" antennas. So omnidirectional / signal strength issues were not of concern to us.

Not the answer you're looking for? Browse other questions tagged antenna antenna-theory antenna-construction vhf or ask your own question.