What is Circular Polarization?

What exactly is circular polarization?

First, consider that everywhere, there is an electric field. For every point in space, this field defines a vector that describes the direction and magnitude of force that would be experienced by a mobile test charge at that point.

In practice, the mobile charges are electrons in our antenna. Radio works by creating waves in the electric field.1 These waves propagate through free space until they reach the receiving antenna and cause the electric charges in it to move. Our receivers then detect, amplify, and demodulate this current.

Circular polarization is what you get when you have both a horizontal and vertical component, but oscillating in quadrature. That is, which a 90 degree phase shift between them. 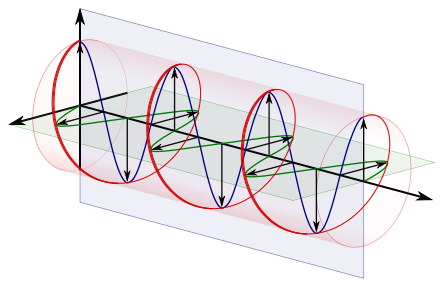 Notice how when the blue line is at a maximum, the green line is at zero. Put mathematically, one of these lines is tracing $\sin(t)$, and the other is tracing $\cos(t)$. If you plot these functions, you get a circle.

If you were a movable charge (say, a mobile electron in an antenna) in this field, you would experience a force pushing you in a circle: first up, then to the right, then down, then to the left, then up again. The magnitude of the force remains the same throughout; only the direction changes.

This is why if you receive a circularly polarized signal with any linearly polarized antenna you get a 3dB loss. A 3dB loss is a halving of power. If you had a vertically polarized antenna, then you are receiving only the blue portion, and not the green portion at all. That is, the green (horizontal) component just pushes the charge in the dipole to the side, and that doesn't result in any current at the feedpoint.

The win is that the orientation of your antenna doesn't matter. If it's horizontal instead of vertical, it's still just a 3dB loss. If it's at 45 degrees, still just 3dB. This is really great if the satellite is spinning, otherwise you'd get fading as it spins an your polarizations align and unalign.

To avoid the 3dB loss, you can use circular polarization on each end. The cost is a more complicated antenna. In this case it's important that each end uses the same sense, right-hand or left-hand. If they are different, the result is the same as trying to link between a horizontal and vertical polarization: extreme attenuation.

1: also the magnetic field, which is always orthogonal to the electric field and the direction of propagation.

The spinning happens the same as the frequency. So a 144 MHz signal is spinning 144 million times per second.

Not the answer you're looking for? Browse other questions tagged satellites circular-polarization or ask your own question.

8
Why is the electric field orthogonal to the magnetic field from an antenna?
9
Are satellites Left or Right hand circularly polarized?
6
How to stack circular polarised antennas
2
Replace directional antenna by fixed antenna