What is an expected sensitivity of a crystal radio for 7 MHz band?

I'm learning to build radio receivers and transmitters. I've successfully build some oscillators, amplifiers and filters before and decided that to build a simple crystal radio would be a logical step further. I wanted to build a crystal radio for ~7-8 MHz because I have a good antenna for 40 m band and during the night there are always many strong AM signals (typically S9+30 and even above) around 7.200-7.300 MHz. 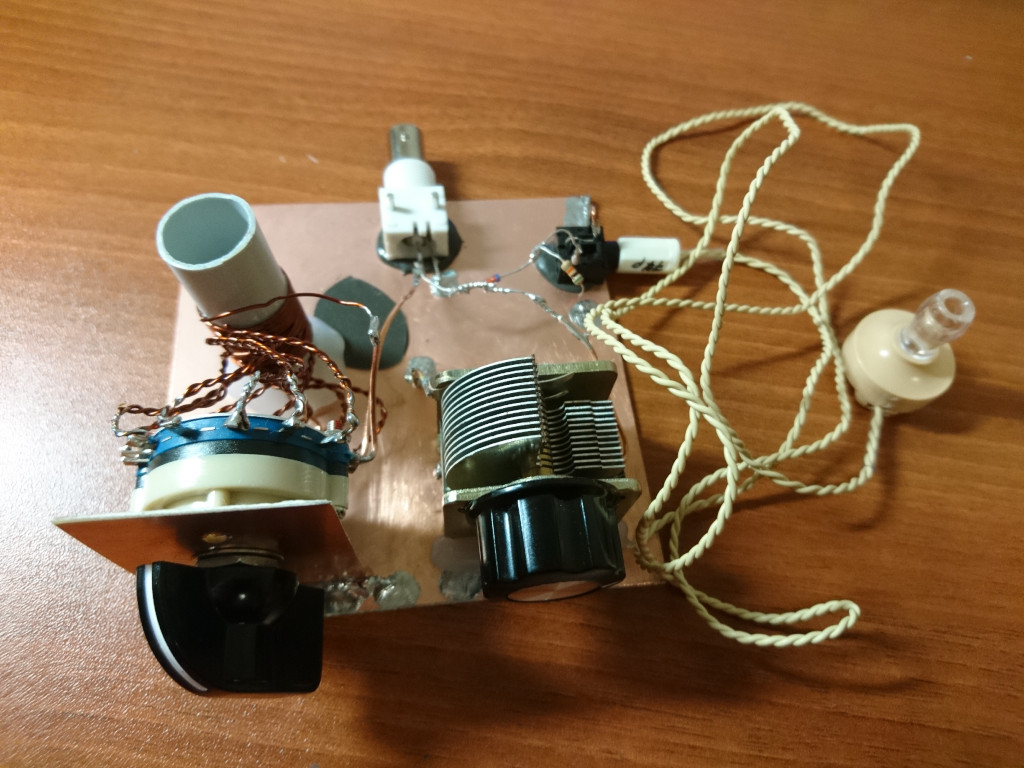 The inductance of the coil is about 8 uH. It has 12 taps with 6th tap around 3.7 uH. The capacitor is 12..365 pF, the diode - 1N34 and the resistor - 51 kOhm. One way or another (considering stray capacitance, not exact inductance of the coil, etc) it supposed to tune somewhere around the frequency of interest:

I tested the radio using a signal generator and an oscilloscope and confirmed that the BPF (LC-network) works as expected. The radio is also capable to receive a 5 W CW signal from my transmitter with the transmitting antenna placed about 20 meters away from the receiving antenna. The radio doesn't receive anything when I transmit on 20 m band.

However no matter how I tried I didn't manage to receive any AM stations. I've noticed though that if I briefly transmit an 5 W AM carrier on the frequency of the AM station (not something I supposed to do...) I can hear this particular station reasonably well while I'm transmitting.

I tried to change the coil, the resistor and add/remove capacitors in series and parallel to the variable capacitor for quite some time. At this point I doubt that I will get any better results.

What brings me to the question I have. I don't know whether such a low sensitivity of a crystal radio is expected for this band (maybe this is the reason why most people make crystal radios for 0.5-1.6 MHz?) or maybe I did something wrong. Is it worth trying to make any further tests or improvements to the radio (in this case, which one?) or it's as good as a simple crystal radio will be and I should move forward to other types of receivers (e.g. superheterodyne)?

I notice you have a BNC antenna socket, so I wonder if you're having the same problem I once had. I built a crystal radio kit, attached it to my HF antenna, and got essentially nothing. I then followed the kit instructions for a long-wire antenna connected directly to the terminals of the kit, and got much better results even though that antenna was strung up indoors.

In other words, consider whether you have an impedance matching problem between the antenna and the radio. Try an impedance transformer or a different antenna with much higher impedance.

Unfortunately, I don't have the theoretical background to tell you how to calculate the input impedance of your radio — I once wondered about what the input impedance of a diode rectifier was, and found an lengthy article explaining that the effective impedance depended complicatedly on the details of the surrounding circuit. (A diode is a nonlinear device, so the rectifier doesn't strictly have a consistent impedance at all.)

Not the answer you're looking for? Browse other questions tagged crystal-radio .

4
Building a crystal radio with my brother. How does this circuit work?
3
How do I get my crystal radio to receive?
3
Air Coil AM & Shortwave Crystal Radio Using 1/4" Copper Tubing
4
Can I create a functional crystal radio using a plastic coil filled with seawater as the inductor?
3
Multi-band Crystal Receiver?
2
Type of Ground Wire for an AM Crystal Radio - I'm using a longwire antenna