Strong but unreadable signal received on 2m FM voice, transmitter less than 2km away. What could be the cause of the readability problem?

I conducted an experiment today using a prototype copper wire 2m dipole at a ground level base station (noted on images) and a FT2D HT with an SRH77CA antenna. I recorded my transmissions using a laptop at the base station, and recorded my GPS coordinates as I moved.

The base station received all of my transmissions up to ~2km at a signal strength of ~S9. However, after 0.5km the signal became unreadable (signal report would be 1/5).

What might be the cause of this lack of readability, but strong reception? Could it be the dense steel/glass/concrete disrupting propagation path? I would have guessed that this would cause the signal strength to be diminished in proportion to the readability.

What kind of things could I do to improve readability of my signal (Maybe it's really just getting an antenna on the roof instead of on ground floor)? - Thanks! KC9PPX/HB3XRS 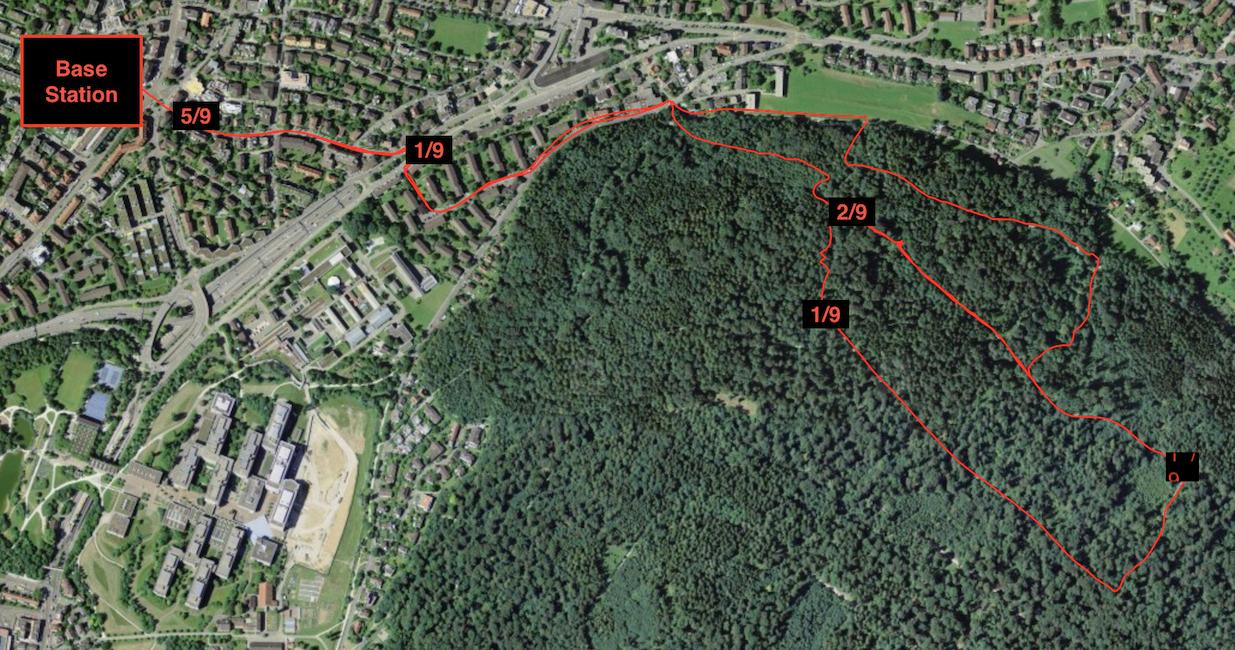 I repeated the experiment again today, but this time I connected the FT2D to my homebrew dipole to act as my base station instead of my FT857.

This time I carried an FT-4X HT with a factory rubber duck. Again inside my pack next to a bag of water. The signal was still unreadable for all transmissions beyond the first checkpoint (same as before). But I can hear one or two words in some of the static, which is an improvement over the last time I ran the experiment. Could have something to do with putting my homebrew dipole on the FT2D!

I think the next time I run this experiment I will put my antenna, radio and computer on the roof of my building. I hadn't thought of using the FT2D as a base station before, it's much more portable and easier to hide than the 857. My guess is this will make a massive difference in readability, but let's see.

I'm using Audacity to evaluate signal strength. I would still guess S9 for each transmission.

Not an expert here, but since I don't see any answers yet these might be possible reasons:

-edit: after looking up your ht, I doubt the battery could be the cause. I noticed this behaviour with a simple old Kenwood th22e. I think the empty battery voltage dropped on each transmit, triggering a brown out reset, starting transmit again and so on. On your ht you would see the screen going blank and you would notice the restart so not a likely cause...

Because you had a strong signal, I am thinking this is either a measurement error (clipping, for example) or a transmission error (high volume background noise, for example) of some sort. I will keep asking "dumb questions" in comments and update this answer as appropriate.

Not the answer you're looking for? Browse other questions tagged antenna dipole ht 2m-band .

5
What is a general procedure for aligning directional antennas?
4
DAB antenna in roof space
3
Do these magnetic field measurements of end-fed and center-fed half-wave dipoles corroborate measurements made by antenna experimenters?
4
Working satellite on 2 meters, at what arc distance to sun (center) will noise floor be problematic to a disruption of a communication path?
2
Constructing a ground level antenna array to monitor radio frequencies using SDR
3
Interpreting (noise) signals from a small untuned shielded loop