Do Buried Radials for Vertical Monopoles Need to be No Longer than the Monopole Itself?

This is a rather common belief among amateur radio operators, but is it true? A NEC analysis provides some insight on this concept.

Below is a NEC4.2 study comparing the fields radiated by an eighth-wave, series-fed vertical monopole driven against sets of thirty buried radials of 1/4 and 1/8 wavelength (other things equal).

The X axis shows field intensity (E), and the Y axis shows elevation (Z) above a flat Earth ground plane, at a horizontal distance of 100 meters from the base of the monopole.

The increased radiation efficiency is the result of collecting more of the r-f currents flowing on and below the surface of the earth within a 1/2-wavelength radius from the base of the monopole, as a result of its radiation. The r-f resistance of the set of buried radials is a series circuit element whose I^2R loss reduces the r-f current that flows along the monopole, itself. 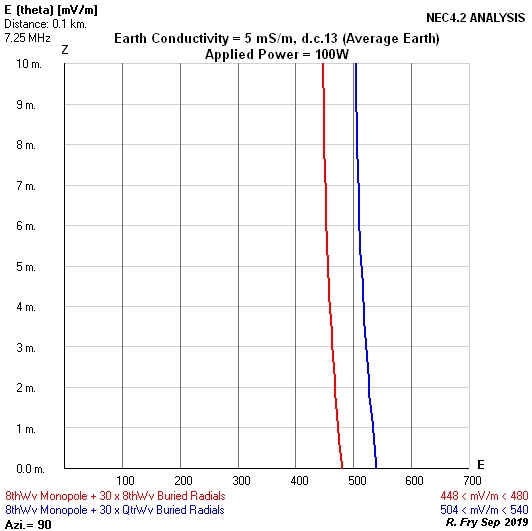 Not the answer you're looking for? Browse other questions tagged vertical-antenna radial efficiency or ask your own question.

4
How Does the Performance of Elevated Radials Differ from That of Buried Radials?
0
Should Hams Using Skywaves Be Concerned About Their Groundwave Radiation?
1
Vertical Hustler - do I need any radials?
2
Which is Better to Use with Vertical Monopoles: Buried Radials or Ground Screens?
2
What Are the Properties of 43' Vertical Monopoles Used as Multiband Radiators?
1
How Does the Propagation of H-pol E-M Fields Compare to That of V-pol E-M Fields (other things equal)?
5
How does this W6NBC "derivative of the classical slot antenna" work?
2
What do radials really do for a vertical antenna?
2
How Accurately Does NEC-based Antenna Software Calculate Vertical Monopole Antenna System Radiation Efficiency for "Far-Field" (Only) Conditions?
2
radials for 6 band Hustler vertical