Will a "crystal set" work with an untuned RF amp stage?

In my ongoing process of building up to a homebrewed general coverage receiver/transceiver, a first step might reasonably be a crystal set, where a tuned circuit and simple, or even improvised, rectifier extract enough power from the transmitted signal to power an earphone.

Crystal radios usually can only receive strong local stations. It occurred to me, however, that I'd gain a lot of sensitivity if I were to connect an RF amplifier stage between the antenna and the tuning RC circuit. This would also let me test the RF stage of my future two-tube receiver in a way I don't have the instruments to do otherwise.

In this case, an untuned RF amp will just amount to making a small antenna do the job of a very long wire, and then some -- but the output of even a very basic RF amp will be far more power than an ordinary germanium detector needs. Burning out the detector isn't desirable, obviously.

One way I can foresee to avoid destroying the detector diode is to use a different diode, with higher power tolerance -- after all, I don't need the very low forward voltage of a germanium part, since I'll have a signal measurable in volts, not microvolts (or millivolts after resonance boosts it a bit). Am I correct in thinking nearly any rectifier part with suitable voltage ratings could be used as the detector in this kind of circuit?

A 1N3409 is a 39 volt Zener, completely unusable in a crystal radio (unless you are sitting at the base of the broadcast tower. ;-)

Historically, 1N34 germanium diodes have been used because of the low voltage drop and therefore high sensitivity. They are a dime a dozen, so you can afford to blow up a lot of them.

Many radios do include a preamp that amplifiers the RF signal coming from the antenna. However there are many issues to consider. A truly broad amplifier will not only amplifier the radio signal you want, it will also amplify noise and even other radio signals on other frequencies. Most preamps are therefore some what narrow in bandwidth and their tuning is part of the radio tuning. This is complicated and limits the usefulness of a preamp in most homebrew radios.

You are also correct that if the output of the preamp is too high it can damage the next stage of your radio. A limiter is often need which again can get complicated.

After some additional thought, I recalled I'd seen designs for single-tube "reflex" radios, where the tube acts as both an RF amp and, after detection of the audio modulation, as the AF amp to provide enough gain to drive a speaker.

This is actually the next step in the "build up from simple to complex" process I've set myself -- in my question, I was asking about this without the AF amplification (the audio signal would require an earphone, lacking enough power to drive a loudspeaker).

And when I searched for "single tube reflex receiver" I found this: 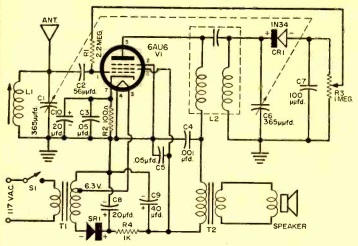 A single tube receiver with a pentode RF amp (differing from the tube I intend to use mainly in filament voltage), albeit in a tuned RF configuration, and a 1N34 germanium diode detector. Which answers my original question: yes, any diode with suitable ratings could be used, but the 1N34 family is "tough enough" to be used in a preamplified receiver and I needn't look further for a more suitable detector diode.

Not the answer you're looking for? Browse other questions tagged receiver diy vacuum-tubes .

3
Crystal set as wireless earphone
2
How does this circuit work? Why is the antenna connected to the output of the amplification stage?
4
Can I create a functional crystal radio using a plastic coil filled with seawater as the inductor?
6
Pentode vs. Triode in Tuned RF Reflex Receiver
4
Can a regen receiver be used as a CW transceiver?
6
Simple circuit for acceptably clean CW in homebrew TX?