What is meant by “poles” when discussing filters?

I was looking over the product page for the K3 (dreaming I know) and noticed that they offer a variety of crystal filters. Some are 5-pole and some are 8-pole, other than price, what is the difference and what is meant by "pole" in this context?

"Pole" comes from the Laplace transform, or it's discrete (for digital filters) equivalent, the Z-transform. Without delving into the mathematics of it, these transforms enable a filter designer to express the response of a filter in terms of some number of poles and zeros on the complex plane.

Using these transforms simplifies many tasks of the filter designer, such as guaranteeing stability, or designing a filter to optimize some aspect such as minimum group delay, minimal overshoot, steepest roll-off, etc. There are many common filter designs, such as Butterworth or elliptic, which cover common goals, and these are usually described in terms of poles and zeros.

The practical application for the ham is this: the more poles or zeros a filter has, or the higher the filter's order, the steeper the roll-off can be. An an example, here's the frequency response for a number of Butterworth low-pass filters with different numbers of poles: 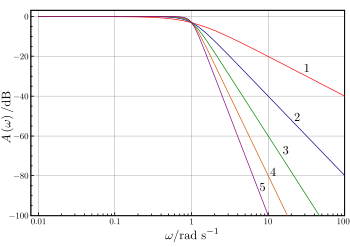 The numbers by the lines, 1 through 5, denote the order of the filter. For a Butterworth filter, the order is also equal to the number of poles. As we add more poles, the roll-off becomes steeper. Again just for Butterworth filters, the roll-off is 6dB/octave for each pole, so a 6-pole filter would have a roll-off of 36dB/octave, and an 8-pole filter would be 48dB/octave. Other filter designs can achieve a steeper roll-off at the expense of some other property, such as ripple.

A pole is a mathematical representation of the feedback (amount and phase) in a linear system. This feedback can be passive (as in an LC or physically tuned circuit), or active (as in a regenerative receiver).

The more poles (or feedback paths) a circuit has, the more complicated or precisely shaped it's frequency response can be, or can be made to be by modifying the locations of the poles.

More poles can be (but are not necessarily) better in producing a desired filter frequency response, but are often more expensive, not only because they may require more passive elements (or feedback paths) per pole, but also because the precision requirements may be higher when trying to use more poles more tightly bunched in a complex plane (Z or Laplace) graph of their location to produce some desired response.

Not the answer you're looking for? Browse other questions tagged receiver filter or ask your own question.

2
What function do high-pass filters in a direct conversion receiver perform?
0
What kind of filter should be used at the output of HF linear amplifier?
1
PSR500/Pro106/WS1040 Phase II Upgrade?
0
Combining two CFU455IT +/-2kHz (4kHz) ceramic filters to get a +/-1.25kHz (2.5kHz) filter for SSB
2
What is the current state of the art in CW filters?
3
How to measure quartz crystal motional parameters using a VNA?
1
Looking for a convenient audio frequency spectrum analyzer
3
Looking for origins of a crystal filter schematic used in uBITX