I've been writing a SciFi story, and it calls for something very unusual to happen. I'd like to check this idea for plausibility, but as I'm not a radio ham myself, I don't know if this already exists (and if so under what name) or if it is totally impossible.

If I have a normal modulated radio signal that can, if broadcast, be picked up by a normal radio receiver — purely for example, let's say it's the normal broadcast from a typical 25 MHz AM radio station — can I use that modulated radio signal to itself modulate a much higher frequency carrier wave in such a way that the radio station's signal will come out of the speakers of a totally unmodified radio tuned to 25 MHz?

This is an illustration of my intention, where y_1 is the signal, y_2 is the signal modulated by the first carrier wave, and y_3 is y_2 modulated by the next carrier wave. (I chose the constants here purely for the visuals, don't take them to mean anything precise). To rephrase the question: Can y_1 come out of the speakers if y_3 is what's hitting the antenna, and the circuit was tuned for y_2? 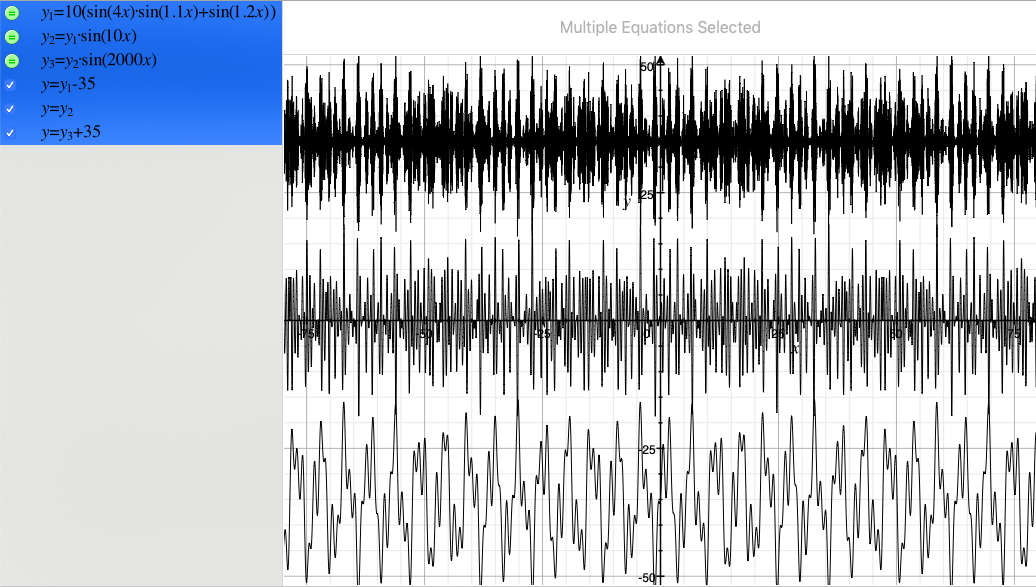 I'm still interested if the answer is in the form of "yes, but" for example "yes, but that won't ever work for FM" or "yes, but there is an extra restriction on the frequencies, which is…"

You could impress a frequency lower than 25 MHz onto your 25 MHz carrier with alternate modulation (say, FM), then the audio frequency signal in amplitude modulation, and an AM receiver tuned to 25 MHz would play the AM signal, while an FM radio would play the FM signal. But any sub-carrier you might put on with FM would have to be lower frequency than the main carrier's 25 MHz.

If you're careful to limit the level of modulation on your FM sub-carrier, it wouldn't even significantly affect the fidelity of the AM signal.

Not the answer you're looking for? Browse other questions tagged receiver transmitter theory or ask your own question.

4
SSB demodulation
3
SSB modulation image rejection
1
There is no reverse flow of energy in a mismatched transmission line, is this correct?
3
Repairing a Tecsun PL-660
3
Understanding WFM modulation
3
Carrier wave timing
0
How to make simple AM detector using an LED?
6
How does IQ modulation work (intuitively)?
3
Why is my experiment to produce 3rd order harmonics by saturating a receiver not working